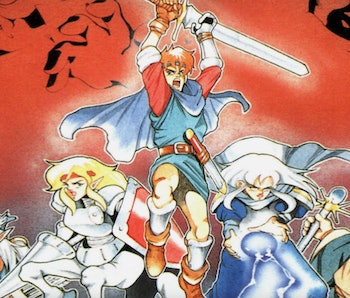 Everybody knows the Super Nintendo had one of the all-time best libraries for fans of role-playing games. Heck, it’s tough for any modern console to compete with the likes of Chrono Trigger, Final Fantasy VI, Earthbound, and so many more genre-defining titles.

Sometimes, that means the arguably superior early ‘90s console — the Sega Genesis — doesn’t get the love it deserves. And one particular RPG series from the period deserves a second look, if not a full-on reboot. If you subscribe to the Nintendo Switch Online + Expansion Pass, it’s sitting in your retro Genesis library right this minute.

You’ll be forgiven for thinking 1992’s Shining Force looks an awful lot like the early Fire Emblem games. Both share the same top-down world maps with an overlaid grid reminiscent of a chess board. But in a 2010 interview with the UK-based magazine GamesTM, lead designer Hiroyuki Takahashi — and headed up revealed he thought the original Fire Emblem was a total snooze-fest.

"The tempo of that title was so bad that it wasn't something I even wanted to play," he recalled.

Instead, Takahashi and his team were inspired by the Dragon Quest series — only they wanted to make the battles “more fun.” An obscure Japan-only PC strategy RPG game from 1988 called Silver Ghost was also a major influence.

“Silver Ghost was different,” Takahashi told GamesTM in 2010. “It was a simulation-action type of game where you had to direct, oversee and command multiple characters; it was the title that convinced me simulation games didn’t have to be crap.”

And combat is where Shining Force excels. You’ll recruit as many as 30 characters over the course of your journey — many of them optional or easily missed. There’s the usual assortment of tanks, ranged fighters, support characters, and melee all-rounders. But there are loads of intriguing riffs on familiar types, and with a little effort any character can become a powerhouse. (Strangely, one of the best is a flying squid who casts ice magic.) Simply swapping one or two new recruits into your active roster of 12 can completely change your strategy between battles.

“Simulation games didn’t have to be crap.”

Once you clear a few maps and start feeling a little too confident, Shining Force will knock you down to size. Each battle gradually ratchets up the difficulty, introducing deadlier enemy attacks and map gimmicks that’ll force you out of your comfort zone. If you get stuck on a tough fight — or your team’s leveled unequally — you can easily grind experience by repeating past maps. Shining Force isn’t as challenging as Wargroove — the difficulty level is more on-par with Fire Emblem: Three Houses without permadeath.

While the story of Shining Force is serviceable enough to get you from one map to the next, this is not a game you play for fascinating lore and character development. There’s a captured princess, a sword of light, and cookie-cutter baddies like “Darksol” and “Dark Dragon.” New recruits won’t change the direction of the story in any meaningful way.

It doesn’t matter. The pared-down approach to storytelling totally works here, and it’s completely by design.

“Even today, you see many role-playing games that are designed according to a philosophy where battles are just a bonus and the story is the main thing.” Takahashi said in 2010. “I could never accept that and I wouldn’t go along with it. RPG players spend such a great amount of their time in battle that there’s no way a battle system should be treated merely as something that’s tacked onto a good story.”

After Sega’s lackluster support of the Shining series on the Genesis and Saturn, Takahashi moved on to greener pastures. His company, Camelot Software Planning, partnered with Nintendo in the late ‘90s, and has since been the steward of the Mario Tennis, Mario Golf, and Golden Sun series on a variety of home and handheld consoles. Still, some three decades after its 1992 release, the fast-paced battles and rewarding strategy of Shining Force still holds up.

You can play Shining Force on Nintendo Switch Online’s Genesis library, and via the Sega Genesis Classics collection available for purchase on PS4, Xbox, PC, and Switch.

More like this
Gaming
8.7.2022 3:00 PM
You need to play this forgotten sci-fi classic on Nintendo Switch ASAP
By David Grossman
Gaming
8.5.2022 6:00 PM
25 years later, Soul Hackers 1 is still one of the best cyberpunk games ever made
By Willa Rowe
Gaming
8.2.2022 5:55 PM
28 years later, the most subversive RPG feels more relevant than ever
By Hayes Madsen
Related Tags
Share: