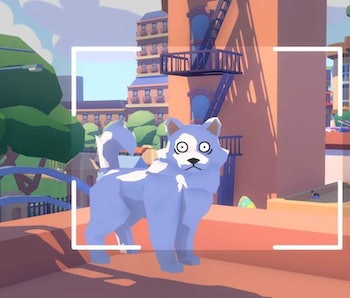 Animal games are all the rage right now. Stray has set the world ablaze with its adorable, true-to-life feline exploration antics. (Even real-deal cats are getting in on the fun.) But where are gamers of the canine-loving persuasion to turn?

Humans and dogs have always had a special bond. No other animal has such a unique evolutionary relationship with us. Together, we conquered the animal kingdom. In return, we give our best friends an honored place in our society (sorry, cats). Of course, we’re not out hunting and gathering and herding cattle in our modern world. We’re mostly making content and, gee whiz, wouldn’t it be swell if there was a game about it?

Your escape begins as a humanoid camera with cartoony arms set loose in a world of dogs. There are no people in the world of Pupperazi, truly a paradise worth visiting. Your task is simple, become the best dog photographer. Your path to success is also quite clear. An escalating series of in-game to-dos will have you on the hunt for some very specific requests. Your rewards for completing tasks are doled out in Bonks, a basic currency used for upgrading your gear.

If it sounds simple, it’s because it is. This isn’t a game meant to time up whole weekends; one pleasant afternoon is plenty. There isn’t any long narrative or cut scenes. The graphics are stylized, but a little ruff (pun intended). You’ll get cute doggo pics but the pups are largely stationary. Don’t go in expecting it to be Stray-but-dogs and you’ll have a fine time.

Exploration is rudimentary by design. There aren’t waypoints or shortcuts because the maps aren’t overwhelming and the challenges are open-ended. If you need HUD-level assistance for an objective like “take a picture of a dog wearing clothes” in a game with nothing but dogs in it, maybe video games aren’t for you. The joy of Pupperazi is in these small discoveries.

These discoveries are logged in the in-game Puppypedia, which catalogs the various good boys and good girls you photograph along the way. Most of the major breeds are here, along with context-specific pics like “dog with a sandcastle.”

You’ll also be tracking your popularity on dogNet, the social media platform where you’ll have to upload all your pics. It’s got a number of specific follower categories like “goth” or “fashion” that reflect the various canine capers you’ve captured on film. There are secret objectives, too, found in envelopes scattered across the map. Wander around long enough and you’ll find something new to do.

If you want to get the most out of the game, don’t chase your tail to get achievements. Slow down, take your time, and appreciate all the silly pups out there. Sit. Stay. Good human.

Pupperazi is available now on Game Pass. It’s also available for purchase on PC and Xbox.