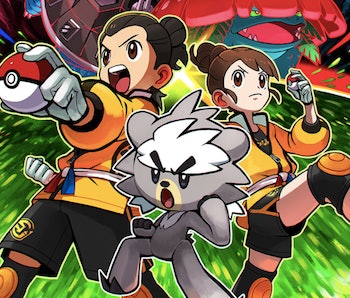 Pokémon Sword and Shield is the first game in the long-running franchise to feature a DLC expansion, so there's no clear precedent for how it will integrate with the base game. If you just downloaded the new content, you're probably wondering how to explore this colorful new corner of the Galar Region.

It's not too complicated, but might not be immediately clear if you've been away from Sword and Shield for a few months. Here's what you need to do to get to the Isle of Armor.

1. Purchase the expansion pass for your version

Unfortunately, you won't get this extra Sword and Shield content for free. The pass retails for $29.99 on the Nintendo eShop. However, it also includes the Crown Tundra DLC, due out later this year. That ain't cheap, but it's better than the $39.99 price tag for Ultra Sun and Ultra Moon.

You'll need to match your expansion pass to your version of the game, either Pokémon Sword or Pokémon Shield. You’ll be able to see the purchase page of the correct Expansion Pass for your version by launching the game on your Switch and selecting the Expansion Pass notice displayed the bottom right corner of the in-game menu screen. It'll look something like this:

Once you've purchased the expansion pass, download the update. Then jump back into the game!

Once you download the update, you'll receive an Armor Pass in your inventory. Head to Wedgehurst Station and look for a man next to the ticket gate. Once you speak to him, he'll offer you the chance to head to the Isle of Armor. It'll look like this on your map:

Do I have to beat Sword and Shield to get to the Isle of Armor?

Nope, you only need to have unlocked the Wild Area, so if you're just starting the game for the first time, you'll have to progress through the main story a bit first. You'll reach the Wild Area in a pretty short time, so stick with it and you'll be off to the island soon. You don't need to have completed the main game in order to explore the Isle of Armor.

The Pokémon you'll find on the Isle of Armor will be scaled to your current level, which means if you're taking a beefed-up, endgame squad of 'mon there, your enemies will be quite strong. That also means that if you're just getting started, the enemies won't be disproportionately challenging.

What can I expect to find and do in the Isle of Armor?

The Isle of Armor has unique environments you won't find elsewhere in the England-inspired Galar Region. Once there, you'll explore beaches, sand dunes, caves, bogs, and forests. Naturally, that means all sorts of new Pokémon to collect!

Another standout feature of the island is a dojo for training your Pokémon, headed by the dojo master Mustard.

Pokémon Sword and Shield: The Isle of Armor is out now on Nintendo Switch.