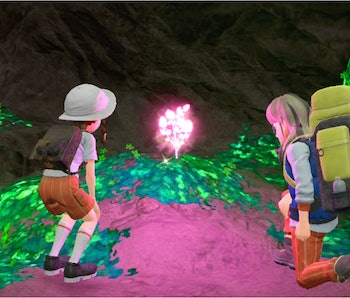 Pokémon Scarlet and Violet really said, “The world is your Cloyster.”

One of the biggest draws is the promise of an open-world Pokémon adventure, which it delivers to an extent. That’s where the choice paralysis starts, though. Each area of Paldea has set power levels that make certain areas easier to traverse than others. Scarlet and Violet also have three storylines with a number of steps on each quest. There’s Victory Road, Path of Legends, and Starfall Street. Ideally, the player will shift between these storylines constantly to match the levels, but figuring out the optimal order can be pretty disorienting. So let us tell you the best places to go.

Scarlet and Violet don’t explicitly tell you the level of the Pokémon in any given area. However, as you explore, you’ll realize that the areas closest to your hometown and the Academy in Mesagoza have the most beginner-friendly Pokémon and bosses. They grow more challenging the farther you venture from home. If you just pick a random direction and keep wandering endlessly, you’ll hit some grueling challenges and wind up overleveled for some of the easier stuff on the opposite side of the map. So if you want to optimize your journey and avoid the need to grind for experience, you’ll want to pinpoint the most appropriate tasks.

The story introduction lays out your options fairly well with Arven’s “Path of Legends” and Nemona as the arbiter of “Victory Road,” but here’s an even more in-depth explanation.

Cortondo, the first town west of Mesgoza, has the closest gym to home. Gyms work about the same as they do in past Pokémon games, except trainers have to complete a “Gym Test” before battling the gym leader. In this case, the Cortondo Gym tests the player with an olive-rolling game that is nearly impossible to fail. All you need to do is visit the town obstacle course and push an oversized olive into a basket.

Katy, Bug-type gym leader and patisserie chef, shouldn’t be hard to beat if you have Fuecoco or another Fire- or Flying-type in your party. You might even enter at a high enough level to beat her without a type advantage, considering how easy it is to lose yourself in Paldea. Katy’s Pokémon are only around Level 14, so it should be safe to take her on if you have a steady Pokémon above that level.

Klawf is the lowest-level Titan in the Path of Legends storyline and appears on the way to the town of Artazon on the eastern side of the map, so it’s most efficient to approach it then to get it out of the way and then hit the gym after. It’s beefier than your average Pokémon but shouldn’t be difficult to defeat if you have a Water- or Grass-type Pokémon at about Level 16. Even if you don’t, it isn’t difficult to capture a Water Pokémon by the shore. Arven will do his best to help with an underleveled Pokémon, so you can’t expect much from him.

Once you reach Artazon, you can face off against Grass-type gym leader and artist, Brassius. He’s only a slightly higher level than Katy from Cortondo. However, there’s another boss you might want to take on if you want to start the Starfall Street storyline...

Team Star’s Dark Crew is led by their musician, Giacomo. The team’s base has the lowest level Pokémon out of the Team Star bases with Giacomo’s team hovering around Level 19. However, you might want to take him on with a slightly higher-level team because of the Revavroom that each Team Star leader owns, which is tankier than a regular Pokémon.

As the name might suggest, Team Star’s Dark Crew specializes in Dark-type Pokemon. You can beat them up with a Bug-, Fairy-, or Fighting-type Pokémon or one that knows one of those advantageous types’ moves. For example, Fidough learns hard-hitting Fairy move Play Rough early on. You’ll also want to have a Fire-type Pokémon or move to melt the Revavroom after plowing through Giacomo’s team.

After Giacomo, you might want to take on the Sky Titan, which also demands a similar-level party and is to the west of the Dark Crew base on the map.