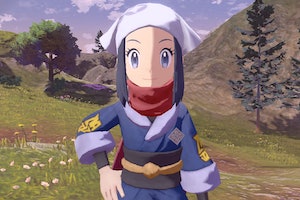 Pokémon Legends: Arceus is set to release on January 28, 2022 for the Nintendo Switch, which means leaks about the game are slowly starting to appear across the internet. While it’s no secret this real-time monster-collecting experience differs pretty greatly from the mainline RPGs in the series, one particular leak suggests a shift in gameplay that goes beyond what some franchise devotees may be expecting. In short, Pokémon Legends: Arceus might be totally unlike Pokémon as we’ve known it for many years.

The report, which arrives secondhand from Twitter’s trusted Pokémon leaker Centro LEAKS, contains quite a few details, both obvious and surprising. Centro Leaks makes multiple claims that Legends: Arceus will be even more action-oriented than some might expect. In this title, Legendary Pokémon essentially serve as boss battles, and they’ll be more difficult than the turn-based fodder of the past. Equally difficult is the fact that catching Arceus will require completing the entire Pokédex for the Hisui Region.

To those who’ve been playing Pokémon games for a while now, this factoid may strike a particular nerve, especially depending on how the game’s starters are doled out. Will Decidueye, Typhlosion, and Samurott be encountered during the campaign? Will trainers be forced to trade with others to complete their Pokédex? The latter system would prove more cumbersome, but it is reminiscent of the multi-game mandated system featured in the mainline RPGs.

While some features from Pokémon Legends: Arceus might adhere to the franchise's roots, others are being significantly overhauled or overtly removed.

Ancillary gameplay mechanics like abilities, held items, and even breeding are all being cut to usher in new mechanics that we don’t know much about yet. And, for those who like to min-max stats of their monsters, IVs are being diminished in favor of the candy-based concept featured in the Let’s Go games from 2018. That means Rare Candy can be used to increase your Pokémon’s level, and Stat Candy can be used to boost a single stat for a monster. IVs will still be a thing, but they aren’t really used to determine stats.

The leak was fairly brief and vague on this, but there are also a few leaks specific to Pokémon as well. Sneasel in particular is getting a new regional evolution, and all three starters will have regional variants with signature moves. That’s not a major surprise, but it is worth mentioning for those hungry for every single detail.

1. A shift towards real-time combat

The answer to this question very much depends on your expectations for the game. These leaks suggest Legends: Arceus still absolutely emphasizes the larger backbone of the Pokémon franchise, but it’s also not afraid to cut out some series staples to make room for new ideas. In simple terms, it seems like Pokémon Legends: Arceus is less systems-heavy than the mainline RPGs so it can shine a more consistent light on its real-time combat.