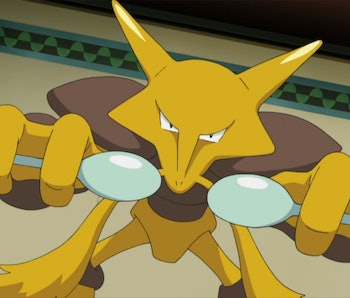 A new mythical-tier legendary monster is about to be unleashed upon the world for Pokémon Day 2020, and a new leaked teaser makes it look like a thicker, more animalistic Alakazam.

We are here for it.

Whatever this Pokémon is, it will be sticking around for a while. While all we got was a silhouette, the picture is still very intriguing because it evokes a Pokémon that we're all familiar with: Alakazam.

New mythical Pokémon have been a staple of the series since the start. These Pokémon are typically distributed through events at various retailers like Walmart or GameStop, but new resources in Sword and Shield like Pokémon Home and Mystery Gifts make it easier to do more in-game promotions. During the last generation, Pokémon like Marshadow and Zeraora were given out after Sun and Moon's release. Interestingly, those Pokémon were in Sword and Shield's data and can now be directly transferred in with Pokémon Home.

This new mythical Pokemon will be the first of this current generation, so all eyes are on it to have some kind of cool hook. At first glance, this silhouette makes it look like a more intimidating version of Alakazam. It has claws, but its toes look similar to Alakazam's hands and it has a relatively similar head shape. The lanky but animalistic body is pretty reminiscent of the Generation 1 Psychic-type Pokémon, but this new monster also resembles Incereroar with its claws. Yet it also has some monkey-like features, so it's clear that the final design will be something totally unique.

Abra and its evolutions Kadabra and Alakazam have been staples of Pokémon since the first generation. Unfortunately, they were one of the Pokémon lines that did not make the cut when Dexit happened and over 400 Pokémon were cut from the current Pokédex. While it's possible the silhouette's similarities are only a coincidental, it would be awesome to see this popular first-generation Pokémon referenced by a new mythical Pokémon.

What type could this new Pokemon be?

This is still just a silhouette tease, so we do not know what type, or combination of types, this Pokemon might be. We don't even know what kind of real-life animal it might resemble. Right now, it seems to look a lot like Alakazam, but also like a monkey-cat. If these are reflected in the final design, it is possible that this mythical Pokemon is a Psychic- and/or Grass-type. If you want to take the claws and dark silhouette more literally, then it's also possible that this Pokémon is Dark-type.

The Galar region also has a surprising emphasis on Steel-types towards the end of the game, so it's possible that this mysterious creature is part Steel-type. The silhouette's stance is quite aggressive and the Pokémon appears to have some sort of brace around its wrists, so fighting type is definitely a possibility.

My personal guess is that it will be a dual-type Psychic and Fighting Pokémon. This is a typing only shared by Mega Mewtwo X, Gallade, Meditite, and Medicham. With a fairly uncommon typing like this, it would be interesting to see how this mythical Pokémon performs in the game's competitive scene.

For now, we can only speculate until all is revealed on February 27.