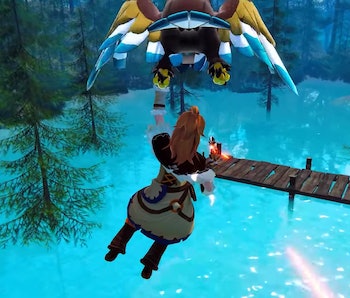 Pocket Pair, the team behind Craftopia has announced Palworld, an open-world multiplayer crafting game that allows you to collect and battle alongside creatures. As shown in its reveal trailer, these adorable animal Pals look an awful lot like Pokémon. But the game has a darker edge that prompted surprise and amusement from gamers intrigued by the June 5 trailer drop.

Here’s everything we know about Palworld.

When is the Palworld release date?

Currently, Palworld is scheduled to launch sometime in 2022.

Is there a Palworld trailer?

There sure is! You can check out the game’s trailer below.

Although the trailer is less than two minutes long, it shows off quite a bit about what to expect from Palworld. It depicts the game’s open world, its art direction, tone, and some of its gameplay, which includes third-person shooting.

In the trailer, you get to see how Pals will be utilized to survive. They’ll not only help you in combat, but also in maintaining the creations you’ve built, and even farming.

We also get a look at the sheer variety of creatures, which seem to range from high-fliers to those that favor the ground, and even the water. One thing’s for sure: they’re all adorable.

What platforms will Palworld be available for?

Palworld is only scheduled to launch for PC via Steam at this time, though given how much interest it has generated already, we wouldn’t be surprised if it comes to other platforms beyond that. In the announcement tweet from Pocket Pair, the developer refers to Palworld as a “next-generation open-world survival crafting game,” which could allude to possible plans to bring it to PS5 and Xbox Series X|S.

Much of Palworld’s gameplay is still under wraps, but we do have a decent idea of what to expect from it. For starters, it will feature many survival mechanics. This means you’ll have to come prepared with food, while outlasting “harsh weather,” as Pocket Pair describes it.

You’ll need to make use of your Pals in more ways than one. For instance, Pals can be ridden to get around the world easier. Some can be mounted as shown in the trailer, while others will carry you around in the sky as you hang onto their legs.

What else will you be doing in Palworld? Players can expect to collect Pals and use them to explore dungeons. Though, the Pals will also help you with everyday life such as farming and building. The trailer shows Pals in charge of manufacturing weapons and other tasks — we just hope they are getting adequate compensation for their hard work.

You’ll also be able to battle alongside your Pals against on-foot human enemies, though it’s unconfirmed how this will play out exactly. In one of the clips from the trailer, a character can be seen shooting a rocket launcher to destroy a building up ahead, so perhaps the game will have destructible environments similar to the Battlefield series.

There will also be an emphasis on Pal breeding. According to Pocket Pair, breeding Pals will allow you to mix the parents’ characteristics to create a much more powerful creature. This seems to be similar to Pokémon breeding, though it’s not entirely clear how the mechanic will work.

From what has been shown, it seems Palworld will incorporate a wide breadth of gameplay ranging from action, to exploration, and crafting/building — all while surviving against the dangers around you.

Yes! As Pocket Pair notes, you can “Invite your friends to go on an adventure together. Of course, you can battle and trade with other players!”

It’s unknown how the trading and battling systems will work, but at least it seems like the game will have a great deal of depth beyond simply exploring by yourself. In Pokémon, the battling and trading mechanics are complex, so it’s possible Palworld will draw inspiration to create deep systems for players to enjoy.

Pocket Pair mentions battling against other players and we’re curious to see how that plays out. In the trailer, we only get to see battles against other humans — not against Pals. It’s unclear if you’ll be able to battle your Pals against another player’s like you can in Pokémon.

What is the Palworld story?

Currently, there isn’t much known about the game’s story. According to the game’s Steam page, “Palworld is a game about living a slow life with mysterious creatures ‘Pal’ or throwing yourself into life-and-death battles with poachers.”

The narrative could be tied to defeating the poachers, who might try to utilize Pals for malicious purposes. We’ll likely find out more about Palworld’s story as we get closer to its release.