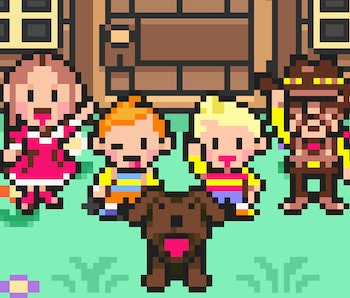 Mother 3 has never officially made its way to North America, but a new tease is giving fans hope. Nintendo showing off a commemorative book for the series and teasing a further announcement has made a Nintendo Switch port of Mother 3 seem more likely than ever.

The announcement is question is that of Hobonichi Mother Project, a book that contains all the text from Mother, Mother 2, and Mother 3, or as we know them in the United States: Earthbound Beginnings, Earthbound, and Mother 3. Clyde Mandelin, the main translator behind Mother 3's famous English fan localization, retweeted the announcement and revealed that the video teases "there'll be other news" before its release later in 2020.

What is Mother 3? While you may not know about Mother 3, you might know about Earthbound, a beloved SNES JRPG that has gained a large following. Earthbound's quirky humor and art style directly inspired the 2015 indie smash Undertale, along with countless more games. Earthbound was ported to the Wii U and New Nintendo 3DS during the 2010s, but hasn't yet been ported to Switch. (You can play it on the SNES Mini, however.) Earthbound's Japanese title is Mother 2, which makes Mother 3 the sequel that never came out here.

Fans have been asking for Mother 3 for so long and so persistently, the game has its own Know Your Meme page. Earthbound diehards pestered former Nintendo of America President Reggie Fils-Aimé for the game throughout his tenure at the company. Some of them still haven't stopped bugging him about it.

Mother 3 came out for Game Boy Advance in Japan on April 20, 2006, but unfortunately never made it to North America or Europe. It follows the adventures of a psychic boy named Lucas who is fighting the evil organization that corrupts his once idealistic village. You may recognize Lucas as a fighter in Super Smash Bros. Ultimate.

While it never came out in the west, Mandelin and some other fans created a robust fan translation for the game in the late 2000s, which has allowed the game to garner some American fans.

Why do fans want a Nintendo Switch port so badly? Fans want Mother 3 to be ported to Nintendo Switch as it would finally mean that the game would probably get a North American release. As a text-heavy release in a niche for the Game Boy Advance late in the series' lifespan, Nintendo decided to not port the original over to North America.

Ever since Nintendo started to pay more attention to Earthbound in the west, fans have been clamoring for a port. Unfortunately, outside some brief acknowledgments from the likes of Reggie Fils-Amie and some rumors that it was coming to Switch, nothing about a Mother 3 port has officially surfaced. Fans are hoping that the release of Hobonichi Mother Project would finally give Nintendo the push it needs to re-release Mother 3.

Why would porting it in 2020 make sense? June 2020 marks the 25th anniversary of Earthbound's U.S. release. This is one of the reasons we are seeing the likes of Hobonichi Mother Project at the moment. Don't be surprised to see more from the Mother series this year, even if it's just merchandise.

The Inverse Analysis — I'll be the first in line to buy several copies of Mother 3 if it ever does release for Nintendo Switch, though I'm trying not to get my hopes up too much. Earthbound fans have waited long enough – Nintendo should release Mother 3 in the West. Mandelin has even offered up his fan translation, but so far nothing has come from it. If nothing else, we will hopefully get some awesome new Mother-themed merch this year in celebration of Earthbound's 25th anniversary.