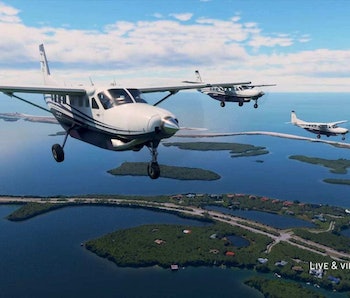 Microsoft Flight Simulator 2020 has enraptured the internet with its awe-inspiring scale and mind-boggling, computer-generated levels of detail. The long-standing PC-gaming franchise was released for Windows on August 18, and shockingly enough, it has an almost Google Earth-level of detail and scale, so players have been sharing pictures of them flying over virtual renditions of real-world landmarks, their hometowns, and even their own backyards.

Microsoft's monumental upgrade to the airplane sim serves as an early example of the scope next-generation games will be able to encompass and gamers have been obsessed with exploring its 2 petabytes (that's 2,000 terabytes) of geographical data.

The game seems to have tapped into many people's urge to travel during a time when the coronavirus pandemic has forced many to postpone trips and cancel vacations. Here are some of the most stunningly lifelike Flight Simulator 2020 screenshots that have scratched the internet's itch to globetrot.

Redditor Turtle_of_rage shared a stunning shot of their virtual flyover of Rio de Janerio including a cameo of Christ the Redeemer, a colossal statue of Jesus Christ that's been named one of the Seven Wonders of the World.

Flight Simulator 2020 includes photorealistic renditions of 341 of the world's largest cities, which it stitched together out of Bing Maps images of all of these locations with the help of French developer Asobo Stuido. Players can visit any of these "Points of Interest" by selecting the World Map / Free Flight mode and setting their desired city or landmark as their destination.

Reddit user illegalsvk flew over the village they grew up in Slovakia and they were shocked to how realistic it looked. That's because Microsoft made use of its Azure Artificial Intelligence to bring to generate 3D models of buildings, trees, and terrain.

The AI was given millions of flat images pulled from Bing Maps and used textures and topographical data to populate smaller towns. A separate Redditor even snagged a photo of their backyard that looked nearly identical to how it does in real life.

Fly over your house

Microsoft promised gamers they'd be able to fly over their houses before Flight Simulator 2020 was released and the company delivered. One Redditor managed to pinpoint their rural home and was shocked by how true-to-life it was in the game, the only thing missing was the mailbox.

This level of detail has spawned a new form of cyberbullying, where players fly their planes straight into someone's home, take a screenshot, and send it to home resident as a mean-spirited joke. Leave it to even find a way to troll in a flight sim title.

The same level of detail applies to far-off islands like Little Saint James in the U.S. Virgin Islands. The landmass was once the private island of dead, convicted sex offender Jeffrey Epstein and Flight Simulator 2020 players couldn't resist their morbid curiosity to go inspect the island for themselves.

Microsoft Flight Simulator 2020 is out now for Windows and will eventually be released on the Xbox Series X.