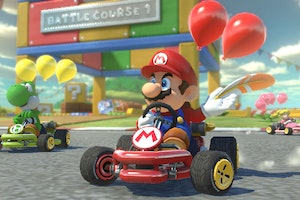 Mario Kart 9 has yet to be officially announced by Nintendo, but it’s no secret that it’s only a matter of time before we get a new dose of fast-paced, blue-shelling action. In the seven years since the release of Mario Kart 8 on Wii U, Nintendo has learned a lot about selling service-based games, particularly from the likes of Super Smash Bros Ultimate and its two successful Fighters Passes.

It seems like an impossible challenge to follow up a game that has sold more than 35 million copies since its launch, which is likely why Nintendo has taken so long to release a Kart 8 successor. Still, all this upcoming racer needs to do is borrow three features from the Smash Ultimate toolkit to become the best entry the series has ever seen.

1. A diverse roster of characters

The continued success of the Mario Kart franchise is largely due to its recognizable cast of Mushroom Kingdom residents. Still, it’s become difficult to ignore that the current roster of racers feels more than a little stale. Taking a look at the character select screen of Mario Kart 8 Deluxe, there’s a total of 32 racers available, but over a dozen of them are clones of an existing racer. A large number of options is nice, but the actual selections are clearly bloated.

With Mario Kart 9, it’s time to get rid of the baby and metal racer variants in favor of characters from other Nintendo franchises.

We’ve already seen some experiments of this nature with the introduction of Link, the Inklings, Villager, and Isabelle, so why not push that envelope even further? How is Captain Falcon not invited to this party? Where the heck is Kirby or Meta Knight? There’s nothing more exciting for Nintendo fans than a Super Smash Bros. character reveal, and there’s a real chance to bring that same fervor to the Mario Kart universe with a completely fresh slate of potential announcements.

Nintendo has such a valuable portfolio of characters to choose from that diversifying its karting roster could benefit the series in Mario Kart 9 and far beyond.

2. A massive number of remastered tracks

One of the other aspects that made Super Smash Bros. Ultimate such a resounding success amongst fans is that it essentially includes every past series entry in a single package. Given the nearly 30-year history, the Mario Kart name has endured, it’d make sense to give Mario Kart 9 a similar treatment by remastering as many retro tracks as humanly possible. Mario Kart 8 Deluxe has already done some of this work with its remasters, so it’d be awesome to see the full list get a fresh coat of paint.

Imagine being able to race on all versions of Rainbow Road at a moment's notice. What about bringing back courses like Toad’s Factory, Airship Fortress, or Riverside Park that haven’t been given love in a decade or more? It’d also be great to see the full lineup of Battle Mode tracks brought together as well, completely refactored to support a series of new modes. Mario Kart titles typically feature a total of 32 standard tracks, so pushing anywhere beyond that limit could be a huge win for nostalgia.

One of the most puzzling aspects about the post-launch cycle of Mario Kart 8 Deluxe was its complete lack of DLC in the form of new or returning tracks and cups. However, now that Nintendo has learned how to market and release DLC with Super Smash Bros. Ultimate successfully, there’s an obvious opportunity to turn Mario Kart 9 into a service-based title that constantly pumps profits even from those who purchased the base game years prior.

In fact, if Nintendo opts to make Mario Kart 9 a complete collection of retro tracks, flashing out the roster with all-new track DLC going forward would almost certainly draw lots of attention. A track pack could include one new racer and a cup full of tracks based on their franchise. For example, you might release a Kirby character pack that includes a Kirby racer and a Dreamland Cup featuring four adorable tracks.

In this way, Mario Kart 9 could exist well beyond the Switch era and into the era of Nintendo’s next generation. Mario Kart 9 can absolutely be the best kart racer ever made. All Nintendo has to do is copy the Smash framework to make it a guaranteed banger.