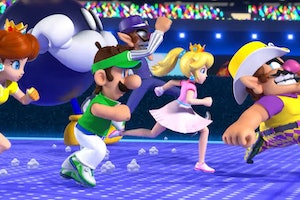 The characters are at the heart of Mario Golf: Super Rush.

While all of them are lovable in their own ways, some are certainly better than others in a practical sense. Many characters excel at hitting the ball far, while others are top choices for speed golf.

So whether you’re playing online or solo, you’ll want to come prepared with the best golfer suited for the mode — either Standard, Speed, or Battle Golf. But which characters are the best?

Sadly, Peach’s low power and stamina make her hard to recommend. She does offer high control, which is great for learning the ropes, but beyond that, we advise steering clear.

As you might expect, Chargin’ Truck is a powerhouse, offering one of the highest power stats in the game. However, his slow movement, low stamina, and control are significant downsides.

Toad isn’t a terrible character, as evidenced by his high speed, control, and spin. But considering he has the lowest power stat in the game, he might be tough to use, especially for beginners. Though, Toad’s stylish outfit is more than enough to warrant trying him out.

WAHH! We’d love to rank Waluigi higher, but his low power stat significantly holds him back. Though, he does have high speed, control, and spin, so he’s worth trying out at least, as long as you’re not going up against one of the stronger characters like Wario or Bowser.

Once again, Boo isn’t the best for power, but the ghost does tout a balanced list of stats across the board. Boo borders jack of all trades territory, allowing them to succeed in many situations, without being the best in any.

Donkey Kong is essentially a better version of Boo, sporting way more power and stamina. His special moves aren’t anything to write home about, but if you’re looking for raw power, Donkey Kong is a great choice.

Thanks to Pauline’s special move, which blasts balls away (and gives her a dash), she’s worth trying to see if she suits your playstyle. Statistically, she’s average, with high speed and low power, though her control makes her easy to use.

If not for King Bob-omb’s high power stat, he’d be a lot lower on this list. But he excels as the most powerful golfer in the game, making it easy to overlook the rest of his low stats.

Not only does Wario have one of the highest power stats in the game, but his special move is quite devastating if you know how to use it. This move shocks other golfers, stopping them in their tracks, making it more difficult for them to hit their shots.

Daisy has nearly everything going for her: Competitive power, high stamina, speed, control, and spin. We’re also fond of her dash move, allowing her to knock over other golfers in her way.

Luigi might not have the most power in the game, but his Special Shot more than makes up for that. This move allows him to freeze the ground upon impact, causing other golfers to slip and slide as they attempt to make their shots.

High-tier stats are enough to grab any golfer’s attention, but Bowser Jr.’s Special Shot seals the deal. It creates a cloud of smoke around the flag area, causing opponents to have a hard time getting their ball in the hole.

Who would’ve guessed that Mario would be a great golfer in his own game? He’s got it all: high stats, a well-rounded lineup of moves, and a Special Shot that blasts other balls away as it crashes to the ground.

On paper, Yoshi might not seem appealing, but his speed is the highest in the entire game, which puts him at the top. Yoshi also has an effective Special Shot that turns balls into eggs.

Rosalina is borderline overpowered with her stats and move set. She’s one of the most powerful in the game, but also uses her floating technique to get around courses with ease.

And finally, Bowser is our top choice, thanks to having one of the highest power stats in the game. To balance things out, Bowser also has great stamina and spin, and high speed for his size. We also love his Special Dash, which sends flames towards other players.