“My role is to push everybody to fuck shit up.” 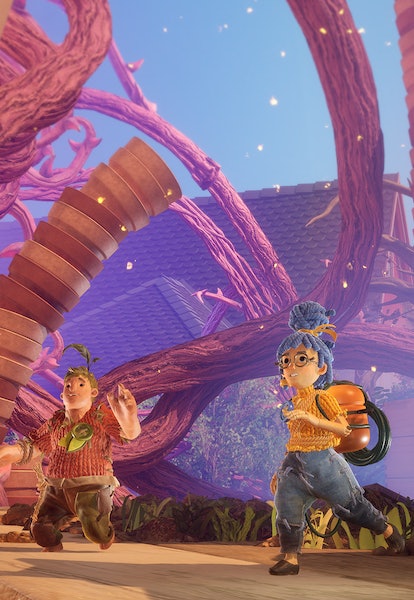 The eclectic game director first gained attention when he took the stage at EA’s 2017 E3 showcase to introduce his co-op game, A Way Out. A few months later he appeared at The Game Awards, where he made his now-infamous “fuck the Oscars” speech. Fares’ unbridled enthusiasm and unrestrained attitude was a breath of fresh air amid the ceremony’s meticulous polish.

One might assume EA would have tried to rein in the director while promoting his latest game, It Takes Two, a light-hearted romantic comedy adventure that draws inspiration from family-friendly brands like Pixar and Nintendo. But within minutes of Inverse’s interview with Fares, it became clear that he’s as untamable as ever.

“Developers are way more fucked up than they think,” Fares tells Inverse. “Fucked up is a good thing, creatively … and It Takes Two is a fucked-up game, in a good sense.”

Interviewing someone as unpredictable as Fares was going to be a two-person job. In the spirit of It Takes Two’s “co-llab-o-ration,” Inverse’s Giovanni Colantonio and Just Lunning conducted a co-op interview with Fares about “fucking shit up” in the industry, his thoughts on marriage, and his guiding game design philosophies.

Giovanni: Why are you drawn to co-op games specifically?

It Takes Two is not your typical co-op game; it is written and designed from the beginning as co-op and that’s very rare. There's so much creative stuff that we haven’t been able to explore yet. Not only creating unique abilities for the players, but also story-wise we can make unique, strong characters that can fuck with your mind both in the game and outside.

There’s so much stuff to be done here and we’re just scratching the surface. I’m quite surprised that we haven’t seen more studios doing this.

Just: How do you design a co-op game that’s fun for both players?

We try to come up with abilities that feel really natural. Then we slowly develop those and build levels around them. We performed a lot of testing to make communication with your partner feel essential.

A line that we always say [at Hazelight] is “fuck shit up.” This game will force you to second guess. You don’t know what’s going to happen; there’s always going to be something new coming into play.

“There’s so much stuff to be done here and we’re just scratching the surface.”

J: Could you expand on your “fuck shit up” mantra?

It's actually quite simple. If you look at people who play our games, they're like, “whoa, what the fuck?” That's what I mean — taking everything to the next level. Don't take your first idea and say “Okay, let's do that.” Let's go for the second, the third idea. How can we make players ask, “What's going on?”

Many developers are way more fucked up than they think. Fucked up is a good thing! My role is to push everybody to fuck shit up. It Takes Two is a fucked-up game, in a good way.

That's how you create a game that’s full of passion, love, creativity, and mad ideas.

J: What do you think are some untapped genres with co-op potential?

I think what we’re doing! The narrative experience in co-op can be taken to the next level. Hazelight is getting better and better at this. The hardest thing is to do is combine gameplay with story. It’s really hard to balance that in a co-op game, because you’re not as focused. Players might talk through cutscenes. You miss a lot of the things you get in single-player games when playing alone.

Personally, I’m not a big fan of the looter-shooter games. I would love to see more games like It Takes Two. I do really hope other studios start doing this. I’m more of a story lover that wants to follow an adventure. I’m not too much into leveling up a character. Not that I have anything against it! It just isn’t my thing.

J: What are some other co-op games that really get it right?

The best example, obviously, is Portal 2. That’s also done with co-op in mind, though there wasn’t any story. The best way to create a co-op game is to think about it from the beginning. You have to stick to your vision and say “This is how it’s going to be played.”

Who wouldn’t want one or two games like this every year to play with someone? That would be super cool.

G: You’ve become a huge personality in the gaming space. Do you consider yourself an “auteur?”

Not really. Like a movie, making a game is a huge collaboration. It obviously needs someone that makes sure everybody follows the vision.

Games are a collaboration between a man and a great set of developers. Some people look up to Naughty Dog for having people like Neil Druckmann and Bruce Straley. They lead by encouraging developers to go a specific direction. That's important.

I don't know why I’ve built this reputation. Maybe it’s because I speak my mind? I hope it has an effect on the industry.

I do believe that many of the single-player games last a bit too long and mechanics are used for too long. Games are too long.

It’s weird that people want replayability. Why the fuck are we talking about replayability? Do you know what percentage of people actually replay a game? I’m not sure if this is true, but I believe the people who buy games without playing once is a higher percentage than those who replay them. Yet, we're still focusing on that small part.

How sick is this? Are they in a mass psychosis?

Don't misunderstand me, it’s great if you love replaying playing games, but we cannot adjust development to replayability. Why do developers, publishers, and reviewers talk about replayability? What are we doing with that data? It's crazy. We should focus on making a good game and not stuff like that.

We have a problem with players actually finishing games. Let's take Witcher 3, one of the most praised games ever. 30 percent of players finished it. Witcher 3 sold around 25 million copies. 30 percent means 7.5 million people beat it. So you’re left with 17.5 million people who didn’t finish? And you’re still talking about replayability? It's madness.

When I talk, people make headlines out of it. I don't care. I'm gonna keep saying what I think. Someone has to talk about these issues. Hopefully it starts to change in the industry.

G: It Takes Two feels like a game that begs to be replayed since each character has different mechanics. Was that deliberate?

No, that's the irony of this! We didn't even consider replayability, but it's a very replayable game!

J: Do you believe any couple could overcome a divorce?

Oh, shit. I mean, look, this whole marriage thing is a social construct – it's an idea society created. It's based on Christian ideas. There's a reason why statistically 50 percent of marriages end in divorce. People have weird, vague, and crazy ideas about what love should be.

At the end of the day, we should question what marriage and family really are. I believe that we will always have more knowledge we have about ourselves as people than our partners. Divorce will always be more common than staying together.

It sounds very pessimistic. I really believe in love, but it’s the best when you find love in yourself. If you wait for someone to create love for you then you're in deep shit, my friend.