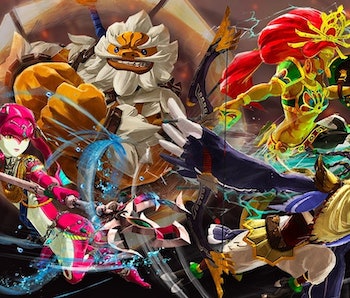 Hyrule Warriors: Age of Calamity has 18 playable characters that Legend of Zelda fans can use to battle through the Great Calamity, the cataclysmic event that occurred a century before Breath of the Wild.

Players will begin playing as Link and gradually unlock the rest of the roster by progressing through Age of Calamity's campaign. Once gamers complete the story they'll be able to dive into massive battles with any of the games' characters.

Here are the worst and best character picks in Age of Calamity to guide your campaign through the Great Calamity.

These characters are difficult to justify using because other cast members can do everything they can do, but better.

This massive Korok is slow and has one of the worst attack ranges in all of the game. Even his upgraded combos are underwhelming. And to top it off, his size makes him vulnerable to damage.

Hestu can only be described as a show-off pick you can choose to capture outposts if you have a strong enough weapon. He's like playing the game with one arm tied behind your back.

This friendly Goron is a heavy-hitter but is too slow to compete with any of the other cast members. He can obtain some very powerful boosts thanks to his unique skill of Daruk's Protection that prevents damage. But even then, he needs to charge the energy for a few seconds for it to take effect.

He's a big, slow-moving target that needs to stand still often, which is not a good combination.

This pick is four characters in one, which might sound strong, but their size and slow movement speed make the Great Fairies terribly at dodging enemy attacks. However, each Fairy hits in a massive area, and each one has her own unique ability which gives them a bit more flexibility than Hestu and Yunobo.

They're still a gimmicky pick. There are plenty of other heavy-hitters that are faster and less prone to taking massive amounts of damage.

These characters are best used situationally with certain powerful traits, but there are better options in the roster.

The Hyrule Champion narrowly makes it out of low-tier thanks to his invincible roll and devastatingly strong attacks. But much like Yunobo, he's very slow and needs to stand still to channel his best moves, which opens him up to being interrupted by foes.

The leader of the Yiga Clan has a very powerful unique ability that can blow past enemies' shields, but he has an awkward normal moveset that makes him very lop-sided compared to most of the roster.

His ability makes him more invincible than Daruk, which gives him a slight edge in the midst of combat.

The antagonist of Breath of the Wild suffers from the same weaknesses as Daruk. He has massive, heavy-hitting attacks, but they are easily interrupted by enemies. Boosting his attack speed can make him much more effective.

Ganon is particularly strong against more powerful enemies and can even stun-lock them if you time his attacks correctly.

While speed is oftentimes very powerful in Age of Calamity, Riju has too much of it and nothing else. Her moveset is too focused on mobility and not enough on damage, which makes her unwieldy to control. You'll find success clearing easy enemies with the Gerudo but bosses will be an uphill battle.

This Breath of the Wild DLC boss has well-balanced normal moves that let him deal substantial damage in close quarters. He'd be higher up in the tier list if it wasn't for his unique ability that makes him gigantic.

He might be invincible while he's shapeshifting, but once he's huge, Maz becomes a sponge for damage.

The tiny Guardian is a force to be reckoned with when it comes to clearing weaker enemies thanks to its vacuum attack that pulls foes into a single spot, plus his unique ability fires a powerful laser that deals a solid amount of damage at a safe distance.

His biggest weakness is taking out powerful foes, which can be made easier by summoning orbs that deal extra damage but there are better balance characters that require less effort to defeat bosses.

These characters are very powerful overall but are missing a few ingredients keeping them from being the perfect pick every time.

The Prince of the Zora might be lacking in mobility, but he has solid base attack speed that allows him defend himself no matter the position that he's in.

He's a solid mid-range pick that has access to powerful sweeping attacks, plus he isn't as vulnerable to being interrupted thanks to his superior attack speed.

The King of Hyrule is a straightforward melee brawler with the ability to switch between "Guises," or battle stances to either dish out quick light attacks or devastating heavy swings. But King Rhoam lacks any ranged abilities, which requires him to bring the fight to his foes opening him up to taking damage.

Lady Urbosa can delete enemies with her grounded area-of-effect lighting abilities. This makes her one of the best choices for taking out massive hordes of enemies, but the limited range on her normal attacks leaves her open to taking unnecessary damage in one-versus-one scenarios with bosses.

The Rito warrior is nearly tied with Urbosa for being the best clearer of weak enemies in the game, but his superior range gives him an edge. Teba lacks when it comes to taking out a single, powerful target.

The avian fighter is the king of aerial combat but is lackluster on the ground. Revali's incredible movement speed, coupled with his flight, makes dodging melee attacks a breeze which renders most basic enemies defenseless.

His biggest weakness is taking on powerful foes, since he relies on quick hitting, low-power attacks that might take a while to defeat bosses.

The Princess of Hyrule has made it up here thanks to her Bow of Light weapon (unlocked after the Chapter 6 mission "Each Step Like Thunder") that can absolutely demolish her foes at a distance. Once acquired, Zelda can active her Luminescent form and stay in it until her Special Ability meter is depleted, allowing her to dish out incredible damage at long range.

The Princess of Zora rounds out high-mid tier with her excellent mobility, thanks to her ability to blink to enemies by using water whirlpools, and the fact that she can quickly force weak-points from enemies.

Boosting her attack speed can be incredibly strong as you'll be able to stun multiple enemies at once.

These characters have it all and are never a bad choice regardless of the challenge you're facing.

The Legend of Zelda protagonist is a jack-of-all trades in Age of Calamity with the ability to wield the most types of weapons out of the entire cast. This makes it so he has no glaring weaknesses and can flexibly deal with anything thrown his way.

The best weapon choice for him is the Master Sword with a shield, and every other weapon should be used situationally.

The Sheikah warrior is a wise sage in Breath of the Wild, but she's nothing short of a one-woman army in Age of Calamity. Impa tops the tier list because of her ability to clone summon clones of herself that mirror her moves, which in turn charges her special-attack gauge even faster.

Her moveset can be difficult to master but with some practice, you'll shred any army that stands in her way.