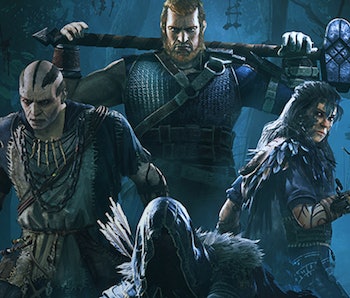 The philosophy of stealing from the rich to give to the poor is at the heart of every Robin Hood story. But Focus Home Interactive looks to change up that familiar formula, with its gritty, hardscrabble take on medieval thievery adventures.

During the Game Awards on December 10, Focus Home Interactive revealed the release date and a new look at gameplay for Hood: Outlaws and Legends.

Here's everything we know about the upcoming Robin Hood adventure.

When is the Hood: Outlaws and Legends release date?

Hood: Outlaws and Legends will be released on consoles and PC on May 10, 2021. If you pre-order a copy of the game, you'll be able to play three days early, starting on May 7.

Is there a trailer for Hood: Outlaws and Legends?

Focus Home revealed the most recent trailer for Hood on December 10 at The Game Awards. Clocking in at just over a minute, it outlines the PvPvE concept of the game, which sees you challenge other players as well as in-game enemies.

The trailer also makes clear that this isn't the cuddly do-gooder Robin Hood that audiences might be used to. Here's what Focus Home has to tell us about the world of the game, courtesy of the game's official site:

In a violent, medieval world, outplay rival gangs in intense PvPvE multiplayer heists. Moving in stealth to steal treasures unseen or dominating through loud and brutal combat, only the best will escape with hard-earned riches.

An oppressed kingdom strangled by the iron fist of a dictator cries out for help. You must answer the call, take up arms, and fight for the people in intense, tactical team-based action. Play as one of the legendary figures of yore in nail-biting heists where you must infiltrate, locate, and extract priceless treasure guarded by a powerful military force.

What platforms will Hood: Outlaws and Legends be released on?

Hood: Outlaws and Legends will be released on PS4, PS5, Xbox Series S and X, and PC next May.

Who are the playable characters in Hood: Outlaws and Legends?

Although Outlaws and Legends is an unexpectedly dark and violent take on a familiar fairy-tale story, it will allow players to step into the shoes of familiar characters like Friar Tuck and Robin's lady love, Maid Marian. In a post on the PlayStation Blog, Studio Head of Sumo Newcastle Owen O'Brien outlined what players can expect from each of the playable heroes. Each has a distinct combat type:

Hood is of course the Ranger skilled at ranged combat. He can hide in the shadows or perch at a high window and support the team from a distance. He can tag targets and remove threats with his longbow. His explosive arrow ability can be devastating to tightly packed groups, and can even down the dreaded Sheriff – for a while at least.

Little John has become John Nailer, a Brawler, close combat specialist and general tank. His deadly hammer can kill with a single blow, while his Wrath ability turns him into an unstoppable melee powerhouse with endless stamina. If your team is trapped and all seems lost, he is the only outlaw strong enough to raise the portcullis and open up an escape route for the team.

Friar Tuck we morphed into Tooke – a scarred ex-State inquisitor. His flail makes him strong at close and mid-range combat, while his mystical abilities can heal and support his team, revealing the position of nearby enemies.

Maid Marion moved from being a damsel in distress to a warrior and leader in her own right, which is indeed how some of the legends already depicted her. Her burst-fire crossbow and assassination skills terrorise the enemy, while her smoke grenades and invisibility ability bring a stealthy advantage to any heist.