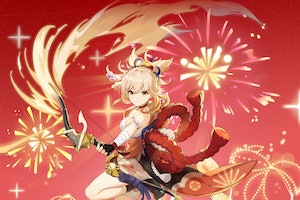 vital items to farm before Inazuma

'Genshin Impact' Yoimiya banner: 4 items to farm before the 2.0 update

Genshin Impact will get a bit more explosive in the upcoming 2.0 update thanks to a pyrotechnics expert named Yoimiya, a five-star Pyro bow user that can join your team. She'll be introduced as part of a brand new region called Inazuma.

Although she won’t be arriving for some time, you can get the ball rolling by collecting items that will be essential for increasing Yoimiya’s Ascension and Talent Levels. The behemoth Genshin Impact datamining site, Honey Impact has uncovered everything that you’ll need for the character.

Here are 3 essential items to farm for Yoimiya before the next update.

What are Yoimiya's upgrade items in Genshin Impact?

It’s likely that you only recognize 2-3 of the mentioned items with the rest being alien to your ears. Unfortunately, almost all of the materials needed for Yoimiya can only be farmed in the upcoming Inazuma region.

From her list, you can currently only farm Crowns of Insight, Dragon Lord's Crown, Agnidus Agate, and Scroll-themed items.

Here’s how you can get the job done.

A Crown of Insight is required to max out every single late-level talent in Genshin Impact. Of course, that includes Yoimiya. Alas, you cannot farm the Crown of Insight at a controlled pace. It's primarily acquired through events at a rate of around one Crown per event.

If you can’t wait for another event, you can also nab a Crown of Insight by upgrading the Frostbearing Tree in Dragonspine to level 11.

Where can you farm Dragon Lord’s Crown in Genshin Impact?

You can farm this by defeating Azhdaha, a new weekly boss that joined Genshin Impact in version 1.5.

This quest only becomes available after completing Act 2 of Zhongli’s story quest. After that, you’ll be to find the Azhdaha by the Dragon-Queller tree in his very own trounce domain.

Where can you farm Scrolls in Genshin Impact?

There's no singular location in Teyvat that you can attend for all your Samachurl murdering needs. However, you can pinpoint a nearby Samachurl using your Adventure's Handbook, by selecting the creature as a tracking target. This provides an easy in-game farming route.

They can come in every elemental variant and all of them will drop the same scrolls, so make sure to defeat them when you can.

Where can you farm Agnidus Agate in Genshin Impact?

Yoimiya is a Pyro character, therefore she needs numerous Agnidus Agate for Ascensions. You can farm these items by defeating the Pyro Regisvine or Primo Geovishap in Liyue. With Inazuma’s release, you’ll also be able to farm the item by defeating the new boss, Pyro Hypostasis. Agnidus Agate can be purchased in small sums from souvenir shops in Liyue and Mondstadt. You can also gain it as a drop from the weekly Wolf of the North boss fight.