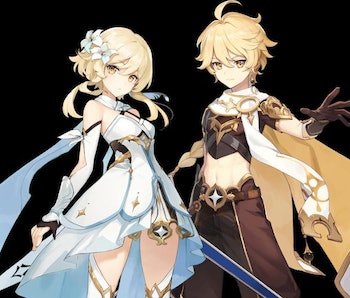 Genshin Impact opens on an action-packed battle between two blonde-haired twins and an ashen-haired woman. Smack dab in the middle of the cutscene, perhaps as you're settling in with your popcorn, you're asked to choose one of these twins to be your playable character for the rest of the game.

How can you choose one twin over the other? You just met them both! Here's more information to help you decide

Which Genshin Impact twin is better?

Which twin do you jive with more from appearance? That's the better twin. For all intents and purposes, this initial option is purely cosmetic. The twins' stats are the same, and they have the exact same abilities, so the choice ultimately comes down to whether or not you want your player protagonist to be a man or woman.

No matter which you choose, the other twin will appear in the story. But don't worry about losing out gameplay-wise. Soon after you start the game, you'll unlock far better characters than the twins to play as, so depending on how fond you are of your twin, your initial choice here will hardly even matter.

As appealing as it might be to name your twin something irreverent like Airplane or Papaya, you might be wondering if there's a canon name you can label your twin.

How do you unlock better characters in Genshin Impact?

Since the twin dilemma was a bust for gaining an easier route through Genshin Impact, how do you unlock better characters to glide through the game? There are a few ways to unlock new characters.

The first method is by completing quests. After certain objectives are completed, you'll unlock new characters to join your party. You can check if a quest will lead to a character being unlocked by checking the rewards section. A portrait of a character will be present if it leads to an unlock from completion.

Another method is by using the game's gatcha system. You can find it by selecting the sparkly symbol on your wheel menu. To purchase things through the gatcha menu, you'll need to spend either Wishes or Primogems, the two in-game currencies in Genshin Impact.

You can either purchase these currencies with microtransactions or slowly earn them in-game. Check your mailbox via the pause menu to obtain some free Primogems. You can also find a list of objectives in your pause menu that can be completed to earn Primogems. There's no reason you should be stuck with this twin duo.