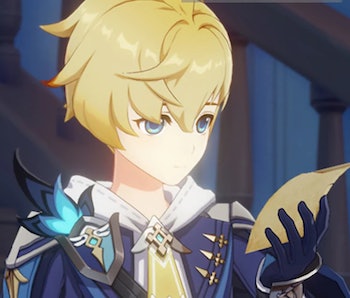 Here’s everything we know so far about little boy Mika, the latest playable character to hail from Mondstadt.

When will Mika come to Genshin Impact?

Mika briefly appeared in the Genshin Impact 3.1 livestream during the “Of Ballads and Brews” event preview.

Not anytime soon. HoYoverse consistently posts character previews for playable characters before their in-game banners. Mika had a cameo as an NPC in the Genshin Impact 3.1 livestream, but he didn’t have a formal preview posted on social media. In that case, he probably won’t come until after Genshin Impact 3.1. Anything after November 2 (the estimated date for Genshin Impact 3.2) is fair game.

What are Mika’s abilities?

As per Genshin leaker Ubatcha, Mika is a Cryo polearm user. You can see what looks like a cyan blue Cryo vision embedded in his glove in the “Of Ballads and Brews” trailer. We don’t even know if he’s a 4- or 5-star yet, though many leakers are guessing he’s a 4-star.

It’s still early after Mika’s introduction, so leakers haven’t gathered data on his abilities yet. Some players are already disappointed, considering they were hoping he would be the game’s first Cryo catalyst or male Cryo 5-star. It’s extra tough because Rosaria already exists as a viable 4-star polearm character.

As always, these details are subject to change. All that’s nailed down so far is Mika’s position in the Knights and his appearance. HoYoverse hasn’t even announced him as a playable character yet.

What is Mika’s backstory?

Mika is a reconnaissance surveyor in the Knights of Favonius. In the latest event story preview, he appears as a messenger for Grand Master Varya to the Knights. Meanwhile, Razor is trying to uncover his past, Diona is keeping her dad sober, and Bennett is trying his best to survive.

“He is a surveyor of the Reconnaissance Company tasked with carrying out missions with the expedition,” Ubatcha wrote. “He used to be a surveyor in Eula's team. The Grand Master appointed him to be a key member of the front-line scouting team.”