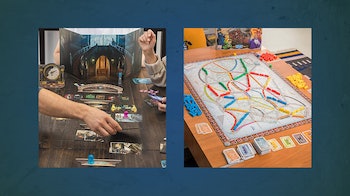 While the exact reason why humans love to play remains a scientific mystery, it’s not hard to see why board games like Pandemic are fun. After all, the game features relationship-building teamwork that lets you all feel like heroes by the end. If you’re a dedicated fan of Pandemic but want to add some variety to your game night, there are other options that incorporate features like strategy, a unifying goal, and a race against the clock — but each of these games has its own twist.

Every game below includes at least two of Pandemic’s defining characteristics. At its core, Pandemic is a collaborative game where all players work together, so you might like other cooperative games that ask players to fight a fire, hunt down treasure, solve a murder mystery, or escape a zombie apocalypse. And some options are just as high stakes as Pandemic, requiring players to complete a mission before the game is over. Another popular aspect of Pandemic is the opportunity to level up, and a few of the games below have several difficulty levels to choose from so things stay engaging.

Whether you’re interested in the supernatural, want to save lives, or want to escape to a desert island, all the games below are sure to have you obsessed. Not only are these games like Pandemic in how they’re won, but they’re also incredibly popular and backed by hundreds of glowing reviews from players.

1. A cooperative game where you’ll need to save lives & put out fires

Combining all of Pandemic’s most loved features, this Fire Point Rescue game has you and your fellow players collaborating to put out a fire and rescue victims before the building collapses. You’ll need to make difficult decisions about the best course of action, like extinguishing blazes or moving emergency vehicles, all while under pressure to save lives. Like Pandemic, this game has several difficulty levels so you can tailor how you play to match your group. It’s a solid choice for game night and has a 4.8-star overall rating on Amazon with more than 900 reviewers weighing in.

One positive review: “We've now played the game at all difficulties levels and I've played it solo a number of times. I'm even more impressed. The game scales well and is flexible enough that if you're creative, you can make up your own hazards, specialists, and victory conditions. This [is] now my absolute favorite board game.”

2. This desert island game from the creator of Pandemic

This cooperative board game was designed by Matt Leacock, who also created Pandemic, so you can be sure it has many of the same enticing features. During the game, players take on the identities of adventurers on a desert island, working together to capture treasures and safely return to their helicopter. The twist is that the island is sinking, so time is of the essence. A wildly popular game, it’s earned a 4.8-star overall rating after more than 8,000 reviews.

One positive review: “Such great fun! Highly replayable. Plays a lot like Pandemic but feels different enough. Every game feels like it comes down to the wire- adrenaline rushes at the end of each game.”

3. A game where you’ll work together to defeat Dracula & friends

If you like to immerse yourself in the world of mythical monsters, this strategy board game is for you. Players work together to defend your town against Frankenstein and his bride, Dracula, the Wolfman, the Mummy, the Invisible Man, and the creature from the Black Lagoon. To make the game more interesting, you’ll need to employ a different strategy to defeat each of the characters, and like in Pandemic, there are multiple difficulty levels to choose from and a race to finish. It’s another winner with game enthusiasts, earning a 4.7-star overall rating and more than 5,000 reviews. You can also play this one solo.

One positive review: “I'm a board game nerd. I'm also a horror nerd. This game is like a match made in heaven. It combines the lore and aesthetic of the Universal Monsters with a fun cooperative board game that's simultaneously quick and easy to learn and yet adaptable enough to have high re-play ability.”

4. This murder mystery game where you channel a ghost

The Mysterium board game is part Pandemic, part Clue, and part Ouija board, and it’s backed by a solid 4.7-star overall rating after more than 4,000 reviews. During the game, one player acts as the ghost of a murder victim and sends clues to the other players, who are acting as psychic investigators attempting to solve the murder. Like Pandemic, this is a cooperative game, and investigators have to work together to decipher the ghost’s clues and identify the murderer, the weapon, and the place where the crime occurred.

One positive review: “I was looking for a game that a large group could play together [...] but also co-op. We have those in our group that like to play games but ones that are not always competitive. Mysterium fits the bill! It has great artistic work and is really fun all around.”

Days of Wonder Ticket to Ride Board Game
Amazon

For a more competitive group, consider this Ticket To Ride board game which is fast-paced like Pandemic with lots of moving pieces, and it involves making strategic choices but isn’t cooperative. Players race against each other to build and connect railroads around the U.S., with the winner making the longest possible route. The strategy game has earned a near-perfect 4.9-star overall rating and an impressive 17,000 reviews from fellow game aficionados.

One positive review: “Based on the reviews, I assumed this would be a great game. I, however, didn't expect to be this blown away with it. This is definitely my favorite board game of all time. Each game seems to be a dead heat, with so many different possibilities and strategies to employ.”

6. The zombie apocalypse board game

In Zombicide Black Plague, you’ll be a resident of a village whose citizens are turning into the undead. Like Pandemic, it’s a cooperative game, with added similarity of trying to survive a plague before time runs out. In the course of the game, you’ll find weapons, learn spells, and battle zombies. You’ll also learn some tips on surviving a zombie invasion, which hopefully you’ll only need while playing. There’s a single-player game option, too.

One positive review: “It's a great cooperative game with a large number of scenarios included, from quick, easy missions to extended, near-impossible ones. You can even make your own, once you get used to how the game works.”

Z-Man Games Pandemic on the Brink Board Game Expansion
Amazon

If you’re a Pandemic die-hard but have played out every scenario, this Pandemic expansion is full of new challenges and twists. You’ll need the Pandemic base game to play, and like the original, you can build on the difficulty level. There’s an additional disease to try to stop, a potential for sabotage, and the possibility of a disease becoming more difficult to treat. Like the base game, this add-on is well-loved, boasting a 4.8-star overall rating and more than 1,500 reviews.

One positive review: “I love the original Pandemic game and "On the Brink" adds another layer of challenge. I could play this game 50 times in a row and have! I love the extra 3 added features and combining them just makes the game all that much better.”

To win this cooperative card game, you’ll have to work together as Harry, Hermione, Ron, and Neville to save Hogwarts from Voldemort and other villains. The game has seven levels, each progressively harder than the last. Along the way, you’ll learn spells, acquire magical objects, and recruit others to join your ranks. Fans of Harry Potter’s magical world will love the game, and it’s earned a 4.8-star overall rating and more than 4,000 reviews.

One positive review: “This is by far one of the best board games I have ever played! I had never really played a co-op deck building game, so it was new to me. I spent 12 hours playing over a weekend with just 2 people. I can only imagine how fun it is with more! So many options, the replayability is off the charts!”

9. A challenging, immersive fantasy board game

Based on the work of H.P. Lovecraft and inspired by the Arkham Horror board game, this cooperative adventure game takes players around the world to fight ancient evil monsters. You’ll work together to solve mysteries, defeat powerful beings, and prevent horror from being unleashed. There are hundreds of possible encounters in this narrative game, so you’ll likely never get bored. Like Pandemic, it’s a popular choice with game aficionados, having earned a 4.8-star overall rating after more than 1,600 reviews. It can also be played solo.

One positive review: “This game is one of my favourite cooperative board games. It can be absolutely brutal, and careful consideration and cooperation with your fellow players is the only way to win.”