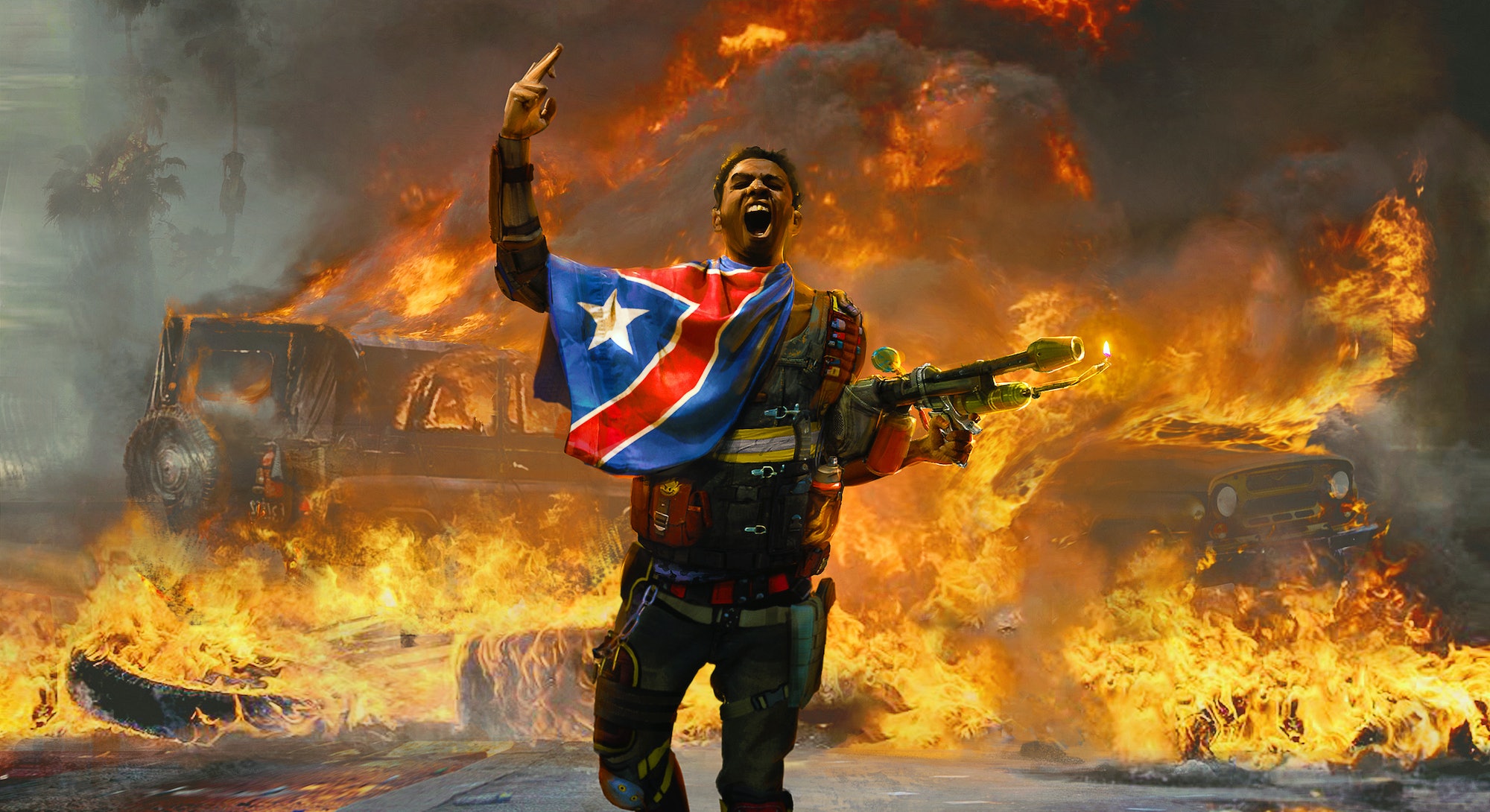 Far Cry 6 is already pissing people off. And it’s probably going to keep doing that.

Back in May, the team behind the game was embroiled in controversy for seemingly flip-flopping on the political nature of the action-adventure sequel, set in the fictionalized island nation of Yara as it teeters on the brink of violent revolution. Yara borrows heavily from modern-day Cuba, and is ruled by the charismatic dictator Antón Castillo, played by The Mandalorian and Breaking Bad scene-stealer Giancarlo Esposito.

In response, Narrative Director Navid Khavari penned an open letter on May 31 which emphatically stated that Far Cry 6 was indeed a political game. Khavari’s family fled Iran in late 1970s and early ‘80s, and he says the childhood dinner table conversations about the revolution are “something that I carry with me for every project I’m on.” He says those experiences are part of what compelled him to write the letter.

“I felt like it was important to clear the air and say we're not running away from anything here. This is going to be a political game, and it's a reflection of the times we're growing up in,” Khavari tells Inverse. “Fears about the rise of fascism, discussions about the effects of imperialism, LGBTQ-plus rights — those were all topics we took very seriously when we were writing the game.”

How well the game’s treatment of those topics will land among the often prickly gaming audience remains to be seen. But there’s no denying that Far Cry 6 aims to offer a more narratively ambitious take on a series best known for its over-the-top action and scenery-chewing villains. Ahead of the game’s October 7 release, Inverse spoke with Khavari and Cinematic Director Grant Harvey about the shades of gray in the game’s politics, approaching the project like a prestige television series, and where Far Cry could be headed in the future.

Far Cry 6 explores the varying perspectives of people on the brink of revolution, rather than planting a flag in the sand. That’s unlikely to change the minds of critics who’ve accused developer Ubisoft of using divisive political topics as mere window dressing. (These criticisms aren’t inaccurate really, but they’re equally applicable to countless staples of our pop-culture diet.)

Despite the well-traveled critiques of Far Cry 5’s “toothless” portrayal of rural America and Watch Dogs: Legion’s “clumsy” imagining of a post-Brexit London, Khavari says he wasn’t expecting the blowback that erupted after the May showcase.

“I actually was really surprised by the reaction, and it was a moment where I really needed to say, like, I'm not even sure why this is a question. When you put a piece of art out there, whatever scale it's on, there's a political sentiment to it. There's a political meaning behind it. There is no getting around the fact that revolution is political,” he explains. “We've been working on this thing for five years and we've worked with so many experts — authenticity experts and sensitivity experts — to try and create as real and organic a story as possible.”

Admittedly, after Far Cry 5 and Watch Dogs Legion, it’s tough to imagine being surprised by what has recently become the default reaction to any Ubisoft game with a modern setting. Still, getting mad at Far Cry for not being “political enough” feels a little bit like being underwhelmed by the chicken you ordered at a steakhouse. Maybe you’re looking in the wrong place. Maybe you wouldn’t have liked what was on the menu no matter what.

That said, Khavari and Harvey say they’re determined to move the open-world adventure series in a more narratively nuanced direction.

“We're going to pull them in with the villain, but make them stay for the heroes.”

“I really wanted to dive deep into the complexity of the guerilla side. These folks have their own politics. There's folks in Yara that voted for Anton, wanted him in power, and then saw what happened. Now they’re living with that and fighting back,” Khavari says, likening those divergent perspectives to those he saw within his own family as a youngster. “In the letter, I called it the debates around the kitchen table. I wanted those in the game.”

Harvey says he hopes that people come away from the game appreciating that Yara, like our own world, is more complicated and nuanced than polarizing political debates tend to allow.

“My hope is that people will see themselves in the game as they're playing, and maybe think a little bit about how that relates to what's going on in the world,” he says. “There are two sides to every story, and it isn't as black and white out there as we all think it is. It's more complicated. That's what makes it interesting.”

As Far Cry 6 aspires to offer players a variety of perspectives on revolution, it draws inspiration from an eclectic buffet of sources. Khavari likens the game to “almost four seasons of a Netflix series all wrapped up into one package.” Each of the game’s three regions — Western, Central, and Eastern Yara — is a bit like its own season, with its own unique mood and cinematography to match.

Harvey says the Cohen Brothers’ No Country for Old Men and True Grit were influences for Yara’s western region, as were the Spaghetti Westerns of the ‘60s.

City of God and Run Lola Run helped to shape the “in your face” feel of Yara’s bustling central regions, while the island’s eastern seat of revolution owes an unlikely debt to a movie set in a galaxy far, far away: the Star Wars sorta-prequel, Rogue One.

The conspicuously expensive aesthetics and cast of Far Cry 6 are meant to invite comparisons to prestige TV. But Khavari and Harvey recognize that creating a cinematic experience that’s also a satisfying video game is a far more intricate affair than “press X for awesome” cutscenes and bitchin’ hair physics.

“There is no getting around the fact that revolution is political.”

“I've always watched my kids play video games over the shoulder, and when I started working at Ubisoft I watched a ton of playthrough videos,” Harvey says. “One of the things I noticed was a lot of the cinematics tended to try and do what was cool, as opposed to what was truthful to the story. I’m an older dude, and I've kind of got the ‘make it cool for cool’s sake’ out of my system.”

For Khavari, it was particularly important to upend the audience’s expectations of what a Far Cry game will look like.

“I wanted to do a bait and switch. We know that everyone's going to talk about the antagonist, we know that the villain is often the most important character. But let's really spend a ton of time talking about the heroes, the guerrillas, and everyone in between,” he says. “We're going to pull them in with the villain, but make them stay for the heroes.”

Khavari and Harvey can’t reveal anything official about a Far Cry 6 spinoff, let alone Far Cry 7. That said, they did share some personal thoughts about where they’d like to see the series go in the future.

If you’re a fan of the Trappist job in Red Dead Online, or just enjoy watching Arthur Morgan get brutally owned by a grizzly, you might be intrigued by Harvey’s riff on a traditional Western setting.

“I'm a Canadian, and I want to see a game in the fur trade — kind of Western, but not really Old West. It's an awesome period that hasn't really been overdone,” he says. “That could be a really cool setting for something like Far Cry —I feel like that would travel. It could very new and very interesting.”

Khavari worked as a narrative designer on 2016’s Stone Age adventure Far Cry Primal, and sees the possibility of outlandish settings as a key element of the series’ past and future success.

“To this day I feel like Primal is an indie game that somehow magically got made on a huge scale. We're all particularly proud of it,” he says. “That's the beauty of Far Cry, it's one of the reasons I stuck with the brand for so long — each game is a reset, each game is its own thing. They could go to space, they could go to the Middle Ages… there's folks that are always clamoring for Jurassic Park Far Cry. But yeah, who knows? I'm just as curious as you are.