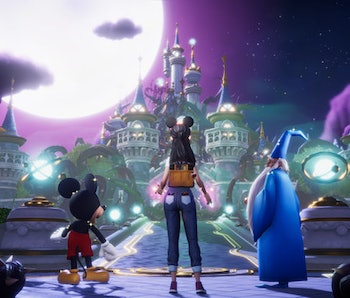 When the world turned inside out in spring 2020, people started looking to games for comfort like never before. One of the big, big winners of an awful situation was Animal Crossing: New Horizons, a game that all but screamed “casual gaming!” pre-March 2020. People went all in on trying to finish their museums, writing letters to villagers, and making sure their homes looked just right.

There was just one problem. As Gita Jackson pointed out in Vice, “Animal Crossing isn't a game you grind.” The island paradise certainly allowed players to never stop, if they wanted to, but the game was built more around casual, daily check-ins with Pietro and other neighbors who you’d get to meet through the natural rhythms of exploration.

Still in early access, Disney Dreamlight Valley feels like a game that wants to fill in the grinding gaps that Animal Crossing left open. It’s not quite a life simulator, because very little of what happens would go down in real life. It’s more of an open-world experience, one that should bring a fair amount of delight to Disney fans and to anyone who likes a little grinding with their casual games.

The set-up for Dreamlight feels very similar to another valley-based game, one starting with the word Stardew. In that game as in this one, your protagonist (who is, more or less, “you”) has decided that they’ve tired of city life and heads into nature. They’ve fallen asleep and when they wake up, they’ve entered Dreamlight Valley, a place where the ever-expanding cast of Disney characters all live together in harmony. Or they used to, anyway, until The Forgetting.

It isn’t quite clear what caused The Forgetting — I’ll give you one guess why —but it happened right after “The Ruler” left, and the results were very bad for the Disney characters who made Dreamlight Valley their home. Thorny branches sprouted up everywhere, hindering movement and just giving a general bad vibe. Poor Merlin is despondent until you show up, offering a solution to all his problems. In a magical coincidence, you have the ability to clear up these branches!

Dreamlight treats its Disney reveals as a big deal, and the score is filled with sweeping odes to “When You Wish Upon A Star” and the theme song to The Mickey Mouse Club (“M-I-C…K-E-Y…”). The game starts off with Merlin, Mickey, Goofy, and Scrooge McDuck. Among this foursome, you learn to craft, go fishing, and start cleaning up the Valley.

You also learn about the two tiers of currency in the game, coins and “Dreamlight.” Coins can be farmed through clearing branches and selling items, while Dreamlight is earned through activity, like leveling up your relationship with Goofy or taking ten pictures. Items like outfits purchased at Scrooge’s store (or the early “investment” you need to give Scrooge to get his store up and running) cost coins, but Dreamlight will clear out the giant thorns in front of the Dream Castle, which you’ll need to meet the whole Disney family.

Dreamlight is a casual game in the sense that nothing feels rushed. You can go fishing as long as you want, as long as you make sure to replenish your energy, which isn’t hard to do. You can peruse Scrooge’s store, find the little pieces of lore left around about The Ruler, or focus straightway on collecting Dreamlight to get beyond the green meadows in which you first find yourself.

The game’s vibe requires a grind but doesn’t push it in your face. It’s happy you’re here and wants to put you to work. Loving Disney characters will certainly make Dreamlight Valley worth playing. If you’ve ever wanted a selfie with Moana, this is probably the best way to do it.

Disney Dreamlight Valley is available in beta now for PC, Xbox, PlayStation, and Switch. A Mac version is “coming soon.”