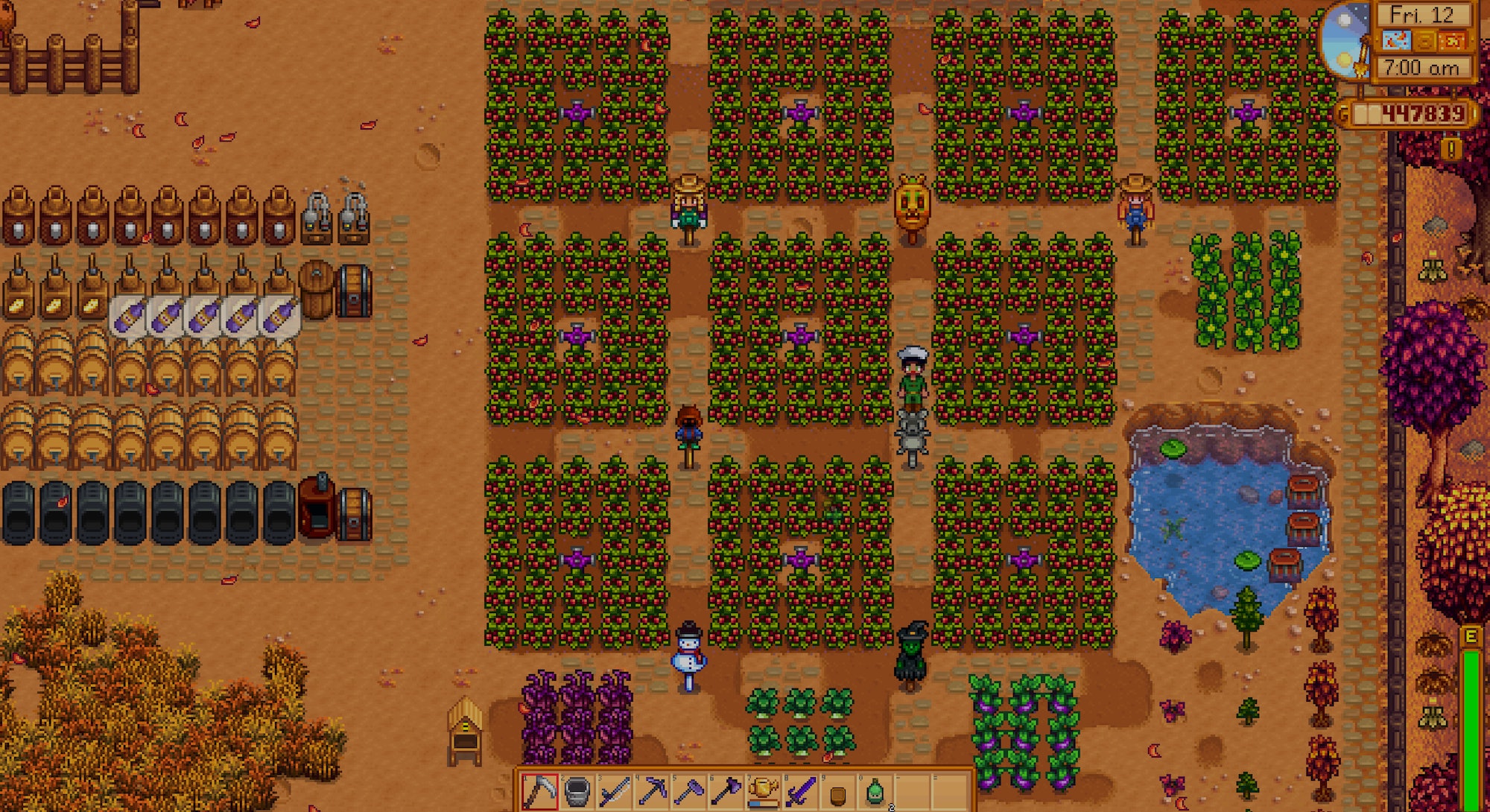 The 32-year-old San Diego resident grew up playing video games like Harvest Moon and The Sims, but he didn’t have the means to take on ambitious do-it-yourself projects in real life. He got back into games after graduating from college, but the habit quickly became too much. So he turned to gardening in 2016. Now, his gaming-inspired videos at Epic Gardening have over 970 thousand subscribers on YouTube, 670 thousand followers on TikTok, and 270 thousand followers on Instagram.

“I got into gardening as a way to move away from games — to get outside and do something natural,” he tells Inverse.

Espiritu isn’t the only gamer whose digital hobby inspired a more traditional pastime. He and other influencers say they're improving their lives during the Covid-19 pandemic through home and garden projects inspired by smash-hit games like Animal Crossing: New Horizons and Stardew Valley.

Inverse spoke with two social media stars and the creator of Stardew Valley for their insights on how a distinctly chill variety of gaming can reshape our approach to real life.

A digital dream made real

Stardew Valley was a major inspiration for Espiritu's TikTok channel. Occasionally, he titles updates on his garden's progress as "Stardew Valley IRL."

In the laid-back country-life sim, you play as a disaffected office employee who inherits a plot of land and heads off to start a simpler life. You can craft artisanal products like wine, preserves, and cheeses, but the main draw for many players is designing an elaborate woodland farm.

Espiritu found some surprising parallels between real-life gardening and its video-game equivalent. “In Stardew Valley, you upgrade all of your tech and all of your systems, so you spend less time doing all of the boring work," he says. "That’s really the same as a large-scale garden.”

“At the beginning when I first got [to my new lot], it was me shoveling, moving in all the dirt, and weeding. Once that’s done, I build the beds. Once the beds are done, instead of hand-watering them, I can switch them over to irrigation. Kind of like upgrading your sprinklers in Stardew.”

Espiritu's favorite part of Stardew Valley was also what he enjoyed most about gardening in real life — designing and improving every aspect of the farm, from chicken coops to sprinkler systems to your own home.

“In Stardew Valley, you can expand the size of your house," he says, "and as we’re talking, I have a guy on top of my house upgrading my roof. That will allow me to put solar panels on top, which gives me more or less free energy. It also allows me to capture water from the roof and route it into the garden. That's the next big project. I like seeing the progress.”

Espiritu currently produces enough food to sustain himself and hopes to eventually have a “real Stardew Valley situation” at some point, so he can sell his produce locally.

But as much as he enjoys the game, he acknowledges that it's not very accurate. After planting seeds in Stardew Valley, crops magically appear. With a laugh, he notes that there are far more opportunities for things to go wrong in real life.

Green thumbs for everyone

Eric Barone — the one-man development team behind Stardew Valley known online as ConcernedApe — tells Inverse the simplicity and "magic" of the game’s farming mechanic is deliberate, and likely a key factor in the game's success. (Since its 2016 release, it’s sold more than 10 million copies on nine different platforms.)

“I considered making the farming and growing more complex," he says. "For example, adding in a crop breeding mechanic that would allow the player to create hybrid crops. Ultimately, I decided that making things too complicated or technical might actually make the game less fun. It was more of a gameplay decision than anything else. I wanted to capture the satisfaction of seeing your plant grow from a seed to a beautiful, mature crop. It's all very abstract, of course, because it's a video game. But there's still an essence of real-life cultivation that shines through.”

“I wanted to capture the satisfaction of seeing your plant grow.”

A big component of Stardew Valley’s appeal is the way it subtly asks players to shift their perspective. Rather than prioritizing button-mashing action or intricately honed strategy, the core gameplay loop is deliberately chill in a way that resonates with the slower pace of quarantine life. There are no deadlines or hard benchmarks for success.

“Stardew Valley is about the joys of returning to a more natural, simple way of life,” Barone says. “Farming is part of that approach.”

But farming is only one aspect of Stardew Valley. Another key component is developing relationships with other townsfolk and learning about the complex stories between them. You can make friends, date, and share gifts with your neighbors. In addition to gaining thousands of social media followers, Espiritu's garden has strengthened his connections with his neighbors and community.

“I’ve started to get to know my neighbors in a four- to five-block radius," he says. "As long as they go on a walk and come by the garden. I’ll see them. I woke up one morning and I had a pumpkin on my doorstep. A neighbor dropped off a pumpkin! Someone else brought me a watermelon in a Radio Flyer red wagon.”

At the start of the pandemic, Anna Molly says she was spending most of her time in her bedroom, and her surroundings had started to feel a little stuffy. An esports and video games marketing coordinator, Molly noticed the spiking popularity of “aesthetic room tour” videos on YouTube, where people show off their unique interior decor.

Decorating is a huge part of the appeal of Animal Crossing: New Horizons. You gather recipes to create hundreds of pieces of furniture, artwork, and other adorable knickknacks. Seizing the opportunity to play the wildly popular game, beautify her surroundings, and make some content all at once, Molly decided to make a tour of her own.

“I wanted to do something different.”

“I wanted to do something different than the usual decoration and room tour videos on YouTube," she tells Inverse. "So I decided to use Animal Crossing as a tool to redecorate.”

Molly easily found items in the game that resembled those in her current room and says she was surprised by how simple it was to create a digital recreation of her real-life abode. Nintendo has a longstanding reputation for making thoughtfully designed games, and Molly was pleased to find that the scale of objects in the game was uncannily close to real life. The accuracy of this virtual toolbox helped her to get more creative.

“I was always looking at various design ideas within the game and thinking of ways to make them personalized," she explains. "I love the color palettes of the game and wanted my furniture in real life to be similar in tone. Designing in Animal Crossing also inspired me to discover how to use things like plants to compliment the room."

Video games often attempt to mimic real life, but as games and the gaming audience become more eclectic and sophisticated, it’s fair to assume that the phenomenon of life mimicking video games is one we’ll be seeing more of in the months and years ahead.

“The skills you learn in video games, you can actually transfer those to real life,” Espiritu says. “A lot of people don’t really get that. You can play the world like a video game, and you get something more tangible.”