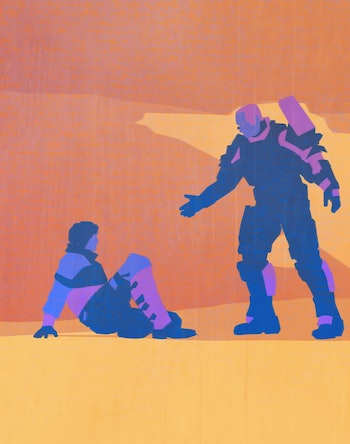 Teamwork is the backbone of Destiny 2.

From completing seasonal story missions and challenging fellow Guardians in PvP to larger activities such as raids, the game encourages working together with clanmates and randoms alike. Defeating alien factions as part of a Fireteam is an ongoing theme of Bungie’s online multiplayer shooter, which has become more popular than ever five years after its debut.

For Miss Demise, a Dawnblade Warlock, camaraderie and inclusivity have been indispensable. After a car accident severely damaged her vocal cords last year, she found solace in becoming an immortal Guardian in Destiny 2. Her boyfriend acted as her own personal Ghost, guiding her throughout activities, praising her successes, and workshopping new builds and strategies. Eventually, she found the confidence to join and even lead others.

“Running raids and helping sherpa people in this amazing community helped me a lot with my depression and getting over that I had forever lost my voice,” Miss Demise tells Inverse. “It’s really nice to be able to help others who may be disabled or suffering from extreme anxiety. Thanks to my boyfriend and now my inner circle of friends, I am again more confident in my identity and want to help others see Destiny 2 as this amazing game and community.”

Miss Demise is one of many disabled players in the Destiny 2 community, which has recently been mired in a tense and at times toxic debate about player skill and weapon usage. As accessibility becomes a greater priority for the games industry, the conversations happening within the Destiny 2 community speak to both the challenges and opportunities of making online multiplayer games more approachable and enjoyable for all players.

Destiny 2 offers a plethora of accessibility features, like customizable controls, subtitles, and colorblind filters. Its emphasis on player choice makes it easy for just about anybody to enjoy. Weapons, abilities, and even the activities players choose have an impact on accessibility.

If you experiment with the accessibility options in a single-player game like The Last of Us Part II, it only affects your own playthrough. But it’s not that simple with a collaborative and competitive online game like Destiny 2, where your customizations can impact the experiences of other players.

That’s the reason some players object to the idea of using Divinity, an immensely powerful rifle that’s essentially the game’s equivalent of a Mario Kart blue shell. Combining Divinity with other items and equipment can effectively make players invincible in certain circumstances, so those who use it are sometimes harassed for not playing fair.

From posts calling players casual to arguing that aiming should be a mandatory skill, to people simply telling others to "get good," a lack of understanding left many disabled players in the all-too-familiar position of asking for access to the same activities as everyone else.

These sorts of outcries have become a major focus within forums and streams. Popular Destiny content creators like Aztecross — who regularly uploads build crafting, weapon guides, and update videos to more than 655,000 YouTube subscribers — have published videos trying to comprehend the animosity that surrounds players using the game’s overpowered weaponry or adaptive equipment.

One of his more recent videos (included below) explores the controversy surrounding Cronus Zen and XIM, two plug-ins that allow users to seamlessly use any controller on any system, as well as enable modifications such as increased aim assist. While non-disabled players argue it gives people an unfair advantage, players with mobility or cognitive disabilities argue that these devices allow them to play alongside their peers.

Aztecross wonders, “Is this cheating?”

Brian Peddie, a Titan main, has a disability called Ehlers-Danlos syndrome that makes repeated, precise movements and a prolonged button press difficult. He argues that skill is subjective: What constitutes a challenge for one player may not pose any problems for another. And that’s without factoring in a disability.

“Skill and mechanics are ambiguously defined in many cases,” Peddie tells Inverse. “Many folks focus on the ability to aim precisely and rapidly while counteracting recoil and managing health. But I’ve seen groups that are great at that fail to get everyone to stand in the right place to start a fight. Managing a group of players, recognizing basic patterns, and prioritizing properly is just as important as aiming precisely.”

Peddie says he avoids especially difficult PvP activities and instead focuses on PvE activities, like hunting for loot, crafting multiple builds, and challenges like Nightfalls and Dungeons.

“The idea that one skill is more important or the only way to experience a game is inherently flawed,” he says. “It’s more productive to consider how each challenge is experienced differently by every player, independent of disability. A meaningful experience is one that is feasible, while still making the player feel accomplished or powerful.”

Conversations critiquing player skill and loadouts can seem never-ending in competitive games. And, as tends to happen all too often in gaming communities, debates about the optimal way to play can morph into personal attacks or harassment. Especially for disabled players, these arguments can force them to abandon public lobbies or play with randoms.

That’s why Miss Demise calls LFG — a group finder for Destiny 2 activities — as the “Dark Place.” And she’s not alone in her experiences. Player SilverSiphon avoids LFG too, instead choosing to play with trusted friends and clanmates. They say they only play with randoms if communication isn’t required. With ADHD, major depressive disorder, and a suspected autism spectrum diagnosis, Siphon says they need understanding teammates willing to accept their disabilities.

“My audio processing isn't great, so I sometimes need instructions or questions repeated. I also have a number of vocal stims that people have told me are ‘annoying’ or ‘strange,’ but are involuntary for me,” SilverSiphon says. “My clanmates and friends have made me feel welcome and don't shame me for stims, attention regulation, or asking for things to be repeated while we play. It's safer for me to exist in that space to avoid the shame, accusation, and other unfortunate comments and actions I've had thrown my way in LFG.”

Destiny 2 is beloved because it lets you play however you want. For Siphon, that means enjoying seasonal content and story developments.

Bungie revealed the first trailer for the next major expansion, Lightfall, back in August 2022.

“I almost gave it up during Season of the Hunt, then Season of the Chosen happened. The narrative hit the happy button in my brain and I haven't looked back since,” they say. “It’s so rich, and the characters feel so vibrant that I need to know what happens next to them. I also see myself in the game: Between my Guardian — an enby Exo named Verda-8 — and the values held by characters like Zavala and Saladin, or even the neurodivergent behavior Crow demonstrates.”

For disabled Guardians seeking connections, Demise urges them to not let toxicity discourage them. At its core, Destiny 2 pushes players of all skill levels to find comfort in what they enjoy most, especially with help from their friends.

“As for Kinderguardians out there, do NOT hesitate to ask for help,” Demise says. “We have all been there and know how it feels not knowing where to go or what to do. Not all of us vets or experienced players are toxic. Some of us go out of our way to hover around you, in case you need the help.”