"Crysis Remastered is just the original game. It won’t include Warhead or any of the other games from the series." 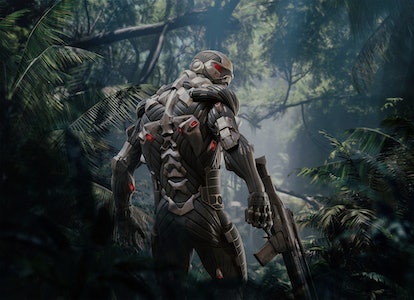 Crytek, the video game developer behind the Crysis series, announced Crysis Remastered last week, but there's been some confusion about what exactly will be included in the current-gen rerelease. Due to a now-deleted Tweet and odd wording in Crytek's initial press release announcing the game, fans speculated that Crysis Remastered could include the standalone Warhead expansion, Crysis 2, and even Crysis 3. The truth is a bit more humbling than that, however.

So there you have it.

Crysis Remastered was announced April 17 as a remaster of the graphically impressive and influential first-person shooter from 2007. The initial press release mentioned the first game's single-player campaign being remade, but other sources indicated that this package might contain a bit more.

Tim Willits, Chief Creative Officer at Crysis Remastered co-developer Saber Interactive used the word "remasters" in a now-deleted tweet. Additionally, the press release on Crytek's site, which is different than the one Inverse initially received, said, "Crysis Remastered will focus on the original game’s single-player campaigns" suggesting that at least Warhead would make the cut with this remaster.

As a result of these statements, fans began to speculate that Crysis Remastered could be bigger than Crytek initially let on and include every game and expansion from the Crysis series. Crytek had not commented on the rumors until now.

Crysis Warhead is a standalone expansion of the original that focuses on a distinct plot and features some new mechanics, but it never made its way to consoles like the original Crysis did. Crysis 2 was a direct sequel released by Crytek in 2011 and Crysis 3 wrapped up the trilogy in 2013. While fans thought all of these games were being remastered, we now know that this is not the case as Crysis Remastered only features the campaign of the first Crysis game.

The Inverse Analysis — Crysis Remastered is a smaller package than many fans anticipated, or were at least hoping for. If you enjoyed the original's multiplayer or became a fan of the series with its later entries, this remaster may not do much for you unless you want to see the series roots. Still, for fans of the original or technically impressive games, Crysis Remastered has made a lot of strides.

The game is using a lot of advanced technology like temporal anti-aliasing, ray tracing, and parallax occlusion mapping to make the already nice-looking 2007 FPS look better than ever, so this should still be worth checking out for fans of the original or those looking for an entry point into the Crysis series.

Crysis Remastered will be released for PC, PS4, Xbox One, and Nintendo Switch during summer 2020.

More like this
Gaming
8.11.2022 7:30 PM
You need to play the most delightful management simulator on Xbox Game Pass ASAP
By Hayes Madsen
Gaming
6 hours ago
‘Cult of the Lamb’ art director reveals how to make a sinister game cute
By Robin Bea
Gaming
8.10.2022 5:52 PM
19 images that prove Splatoon 3 is the Switch's most stylish game
By Robin Bea
Related Tags
Share: