When keeping it real goes wrong

Is the next Call of Duty game too realistic to be fun? 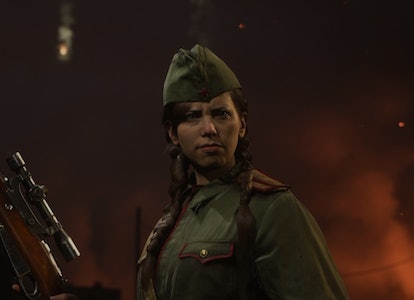 After a long weekend testing out an early version of the upcoming Call of Duty: Vanguard, gamers may feel like they’ve had grim preview of problems that could plague it.

Curious COD players were treated to an “alpha” version of the game they could download on their PlayStation and play between Friday and Sunday, ahead of the its release on November 5. The alpha version featured a new “Champion Hill” game mode, a shoot-out set up previously known as “Gunfight Battle Royale.”

It’s a new multi-arena survival tournament where small squads face off against other teams and are knocked out once they lose 12 lives. It also offers an alternative to the hugely popular Warzone game.

While Champion Hill is only a fraction of the entire package, there might be reason to fret for COD diehards. While Champion Hill could undergo many changes, poor fundamental design decisions present in the early build could plague Vanguard in its entirety.

What’s good — A welcome new aspect of the Call of Duty Champion Hill mode adds a layer of depth not found in the traditional multiplayer suite: Players are able strategize how they spend cash. This takes some of the complexities of Warzone and mixes them into a more digestible mode.

What can be improved — Champion Hill’s not without its issues.

1. The pacing is slow

The pacing, particularly because of the “Buy Rounds” (when you decide how to spend your money), is too slow. Each round lasts about a minute. Most players have made their purchases within the first 20 seconds. That means everyone is left waiting as the timer counts down.

There’s an opportunity to either reduce the timer to zero once everyone has made their purchases, or to chop the timer down to 30 seconds instead of a minute. This would greatly improve the pacing of each match.

2. No control over when to use streaks

As part of the Buy Rounds, you’re able to purchase streaks like a Spy Plane and offensive weapons like a flamethrower or rocket launcher. The biggest issue is that these streaks automatically activate on the next round, meaning you have no say in when you can use them.

This is another misstep, as it takes away some of the strategy of a well-timed streak use. This also means two players of the same squad could potentially overlap with the use of a Spy Plane, which would be a waste since they’d both activate at the same time. Being able to use your streaks when you see fit would give players more opportunities to strategize. As it stands, the streaks seem more like an afterthought.

3. You can’t drop cash to other players

Speaking of cash, we’d love the ability to drop cash to other players just like you can in Warzone. This would make it easier to maximize the effectiveness of your funds, especially since there are only two Buy Rounds.

At the start my experience during alpha testing, there were numerous issues.

Notably, my screen darkened when taking damage. This puts damaged players at a severe disadvantage. Overall visibility on the map was poor. The aim assist somehow tracked targets through walls. Even spawning had some issues, wherein players would reappear behind their opponents, giving them an immediate upper hand.

Sledgehammer Games has acknowledged these criticisms and will be implementing fixes for them in the final build. While this is a big step, there are still other problems that might not be so easy to fix.

The art direction makes it difficult to see other players. Sledgehammer says it will improve map visibility, but it’s unclear what this will entail, exactly. The general art direction of a game that takes place during World War II is what you’d expect: Dark, drab, and muted.

Since enemy players are often seen wearing uniforms that are indistinguishable from their surroundings, it’s difficult to pinpoint their location at times, even if they’re right in front of you.

At what point does realism and immersion start to feel too frustrating for a game to be fun?

6. The game’s sound needs a rework

When other players in separate matches are battling it out nearby, it’s often hard to hear enemies who might be right next to you.

To fix this problem, we’d recommend simply getting rid of any audio outside of your specific match. It might not be as immersive, but it would improve the gameplay, since players rely heavily on sound to come out on top.

7. Minimap problems are back

The final issue we’ll touch on has to do with the way the minimap indicators work. In past Call of Duty games, players would show up on the minimap when firing unsuppressed weapons. But Vanguard borrows the same minimap system as Modern Warfare, wherein players only show up on the compass above instead of on the minimap, which is far less precise.

Modern Warfare was criticized for this, as it encourages a slower pace, which is sort of the antithesis of defining Call of Duty qualities, like adrenaline-pumping escapism. The only time players appear on the Vanguard minimap is when you have a Spy Plane in the air, which only lasts for a limited time (and cannot be triggered at will).

The final word on alpha — In general, Vanguard makes it too difficult to determine where enemy players are at any given moment.

Muddy visuals, audio clatter, and a poor map system make it achingly not-fun to locate enemies. That, in turn, slows the pacing to a crawl, leaving a lot up to chance rather than skill.

Vanguard’s issues go beyond some questionable decisions with Champion Hill, and are instead indicative of a perhaps too-realistic approach to the overall design.

Will staying stuck in the past doom Call of Duty’s future? Watch this space.