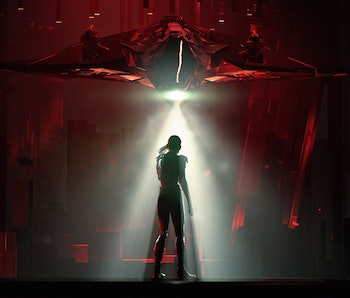 If you're looking for soaring zero-G space combat, Chorus is right up your alley. The game plonks players into the flightsuit of Nara, a fugitive on the run from a terrifying cult out to kill her for breaking ranks. In order to escape, you'll need to rely on your hotshot pilot skills, which will see you zipping across the galaxy, weaving through debris and explosions like an even more nimble version of the Millennium Falcon.

Here's everything we know so far about Chorus.

When is the Chorus release date?

The shooter from Deep Silver is coming to current- and next-gen consoles, Stadia, and PC in 2021. Unfortunately, the Gamescom reveal didn't specify a narrower window for the game's release.

What is the story of Chorus?

Here's an official synopsis, courtesy of the team at Deep Silver:

Take control of Nara, once the Circle’s deadliest warrior, now their most wanted fugitive, on a quest to destroy the dark cult that created her. Unlock devastating weapons and mind-bending abilities in a true evolution of the space-combat shooter. Along with Forsaken, her sentient starfighter, explore ancient temples, engage in exhilarating zero-g combat, and venture beyond our waking reality.

That whole "sentient starfighter" detail is shaping up to be one of the most intriguing things about Chorus. The game's description hints at a symbiotic relationship between Nara and her ship in a way that evokes the trippy, mind-bending storytelling of the classic '90s anime Neon Genesis Evangelion. According to the game's official site, Nara and Forsaken's abilities will evolve together, allowing them to become "the ultimate living weapon." Sounds pretty neato.

Of course, "chorus" is a musical term, which refers to a verse of music that's usually repeated by another singer. This sense of repetition and echoing evokes both the blind obedience of the cult that Nara must escape, as well as the symbiotic relationship between her and her ship. They're going to need each other to get through this.

We got a closer look at the gameplay of Chorus during Gamescom Opening Night Live on August 27. From the looks of this fast-paced shooter, you'll need to have quick reflexes. As you progress through the game, Nara will gain new abilities that merge her innate skill with the spiffy technology of Forsaken. You'll be blasting foes out of your path while executing split-second barrel rolls to avoid meteors, bullets, and incoming laser blasts.