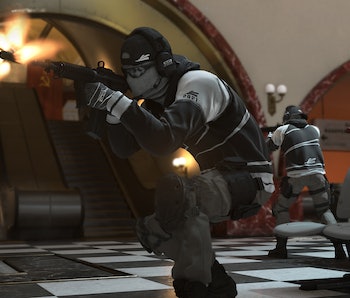 The Call of Duty League returns soon. The esports competition might be essential viewing for some fans of the blockbuster shooter, but it's very hard to actually break into the league without a staggering level of time and commitment. For those that can't participate in the esports competition, your next best choice is League Play in Call of Duty: Black Ops Cold War.

This ranked multiplayer mode was available for previous COD games, and it just came to Call of Duty: Black Ops Cold War in an update on February 8. This is everything you need to know about League Play if you want a taste of what it's like to be a pro COD player.

How to unlock League Play in Call of Duty: Black Ops Cold War

League Play should be available through the game's main menu to anyone who's fully updated Black Ops Cold War. To get started, you just have to choose this mode, set up your classes, and start playing. Your first five matches in League Play are very important because they determine which Skill Division you are initially placed in.

If you're familiar with ranked modes in games like Valorant, this setup shouldn't come as too much of a surprise. This system makes sure that players of similar skill levels are grouped together, so low-to-mid-tier players aren't constantly demolished and beaten by people who should be in higher ranks.

All new players should be able to access it as soon as they boot the game up for the first time.

League Play is a special COD ranked mode where players can try the same modes and maps that pro players experience in the Call of Duty League. That means you'll be playing 4v4 matches with the official CDL 2021 ruleset. The mode does have preset classes that players can use, but this mode still lets players bring in a custom loadout if they have a class and loadout they like more.

There are 30 ranks overall for players to work their way through. Players can increase their rank with Gems they earn by placing in a Division during a League Play Event. Weekday League Play Events run from Monday to Friday; meanwhile, Weekend League Play events are held from Friday to Monday. These events have 5 Divisions:

Players climb up each rank's Ladder with every win while losing or quitting will cost one's Ladder Points to drop. Your final position in these Divisions during a League Play event will earn you the gems that can be used to advance rank.

Obviously, you'll want to place highly in a League Play event to rank up the fastest. To practice, you can also make private matches with the new CDL Pro setting.

What are the Call of Duty: Black Ops Cold War League Play Rewards?

There are several rewards that players can get for making their way through League Play. Every five ranks, players will get a special League Play Calling Card that can be shown off across Black Ops Cold War, Warzone, and Modern Warfare. If you finish a League Play event in first place, it'll add a Victory Flame behind your rank.

This flame will get stronger with every consecutive first-place win of an event, but it will go away if you don't get first. Any XP players gain here will also get applied to their battle pass, just like any other Black Ops Cold War mode, so you don't have to worry about losing out on progression because you focused on League Play.