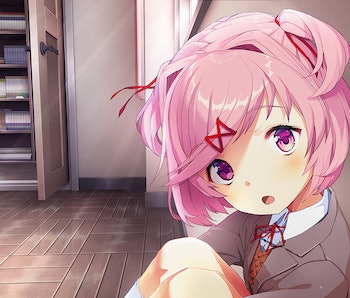 Cute things are the best. But blood, guts, and true crime are firmly in second place in the pop-culture popularity contest. Horror video games like Resident Evil Village and Amnesia can leave us sleeping with the lights on, but too often suffer from a major lack of cuteness. You can spend hours building an intricate island paradise in Animal Crossing: New Horizons for your favorite bunny buddies, but Nintendo’s quarantine hit just can’t deliver when it comes to chills and thrills.

Only one game has been able to balance the two ends of the spectrum: Doki Doki Literature Club.

Back in 2017, Dan Salvato’s anime-inspired visual novel went viral for masquerading as a dating sim set in a high school writing club brimming with cute girls. Initially, it appears you’ll spend the game bonding with each member before forging a relationship with one of them. Along the way, you’ll write poetry that dotes on the object of your affections.

But as you get to know the girls, Doki Doki Literature Club swiftly becomes something far more twisted and thought-provoking.

When one of your relationships gets a bit too intimate, the story takes a truly shocking turn, kicking off a dark path that’s replete with psychological and physical horror. If you like horror, nothing beats Doki Doki Literature Club.

The whiplash from the game transitioning from cutesy to horror is fantastic. It’s not what was advertised, which makes it all the juicier. While the game does warn that it’s unsuitable for children when you begin, you really don’t believe it — until it’s too late. (Doki Doki Literature Club’s trigger warnings should be taken seriously, and you can find out more about them at the developer’s official site.)

There’s never been a better time to experience the terror of this fourth-wall-breaking game. Although Doki Doki Literature Club launched as a free PC game (and it’s still available for free), you can now play its definitive edition, Doki Doki Literature Club Plus. The updated edition is available on PC, PlayStation, Xbox, and Nintendo Switch. It’s got all the horror found in the original — only now, it’s even scarier. (The Plus edition also includes the opinion to turn on in-game content warnings before scenes or moments that contain potentially sensitive content.)

In Doki Doki Literature Club Plus, you’ll experience intimate new moments and side stories. There are six lengthy side stories to enjoy, which will allow you to feel a little closer to each member of the club. The visuals have been upgraded to HD and there are numerous new songs included.

If you like being scared, you should definitely give Doki Doki Literature Club a try in some format. One playthrough, and you’ll understand why the BBC convened a board of experts to discuss if the game was “safe” on live TV. Despite the game’s adorable exterior, it’s definitely not for kids — but the scares it serves up are absolutely unforgettable.