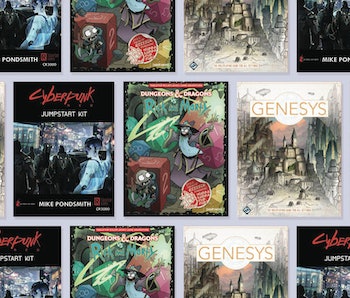 It's not all just fun and games. A brain-scanning study showed that social interactions can help light up the subcortical brain regions, which play a big role in keeping you motivated, while a 2017 study showed that social interactions prompt the release of warm fuzzies-inducing oxytocin, which also stimulates the reward center in your brain ⁠— that might explain why those marathon games run late into the night. Either way you cut it, there's plenty of science to back up why the best tabletop RPG games should be immersive and encourage social interaction.

While D&D might have been the original tabletop role-playing game, and even though it's arguably still the most popular, it's definitely not your only option. In fact, locating games isn't half as hard as narrowing the vast selection down to one (or a few). In other words, if you're wondering, "What tabletop RPG should I play?" you're not alone.

When deciding, you'll want to make sure that the core rulebook is well-written and fully fleshed out; some RPG starter kits come with extras (like dice or character cards), but unlike a board game, most of the action happens in your imagination. As a result, the gamebook is the backbone of your entire RPG experience, so choose carefully. Since RPGs often require prep, it's difficult to get a feel for a particular game unless you've played it first-hand. As a result, reviewer feedback is paramount here. Stick to tabletop RPGs that are highly reviewed to avoid investing time into a poorly designed game.

According to reviewers and avid RPG players, here are the 10 best tabletop RPGs for a wide variety of genre preferences and difficulty levels.

1. The Most Popular RPG Of All Time: Dungeons & Dragons

You can't create a list of the best tabletop RPGs and leave out Dungeons & Dragons. If you're looking for newer, fresher alternatives, skip this one — but if you're looking to learn the ropes with a time-tested fantasy classic, check out this D&D starter set. It's ideal for beginners because it comes with everything you need to play: Dungeon Master's pages, access to 1,000 pre-generated characters, paper figures, blank character sheets, 42 dice, and a flannel drawstring pouch. Anything that isn't sent directly with the order is included in an e-mail with printable pages.

One reviewer wrote: "Great set, very nice dice, enough for a full game! [...] You don't have to buy anything else to get started on your initial journey into D&D!"

Fiasco has been called the "best improv game on the market," and since it combines acting with light role-playing, it's the ideal RPG for anyone who's just starting out (especially since you can play a full game in a few hours). The theme: You're an ordinary person who gets wrapped up in an elaborate crime, and greed, fear, and lust ensue. It's inspired by cinematic creations by the Coen brothers, and buyers say it's "accessible" and "hilarious." Play with three to five people.

One reviewer wrote: "I'm surprised at the different people I can get into this game. This game is perfect for testing-the-waters newbies to a tabletop gaming (But I'd barely say it qualifies as such) or people who couldn't care less about such. It's pretty intuitive to play: If someone's ever seen a movie before, it's quick to pick up."

3. A New, Highly Rated RPG: Blades In The Dark

Blades In The Dark
Amazon

It's rare to find any RPG with a near-perfect rating (not even the classics have 4.8 stars), but according to reviewers, this one deserves all the hype it's gotten: In Evil Hat Productions' Blades In The Dark, you're part of a "crew of daring scoundrels" looking for fortunes on "the haunted streets of an industrial-fantasy city." Your crew will do anything to rise to power, but with ghosts, heists, occult happenings, and neighboring gangs, it's not as easy as it sounds.

One reviewer wrote: "A mind-bending game that will make you rethink everything [...] The art evokes the setting wonderfully because (I think) it's all done by the game's creator [...] The game's setting was built alongside the mechanics, so everything the setting has to offer is useable and exists for a clear purpose [...] If you love tabletop RPGs, buy this book because it will undoubtedly inspire the next generation of game designers."

4. The Most Adaptive Option: Genesys

If you're looking to learn an RPG that's flexible and versatile, look no further than Genesys. Because it's so moldable, players have used this system to create just about any universe (fantasy, based on real historical events, aliens, steampunk — even Star Wars, though that universe technically has its own RPG books using a similar system). In short, if you have a creative mind and want a well-fleshed-out set of rules that allow you to add your own genres and themes, Genesys is the way to go.

One reviewer wrote: "Good system [...] The rules are amazing and really accomplish the goal of being truly universal. Some may complain about the art being unfinished but I think it gives it a beautiful blueprint-ish aesthetic."

5. If You Love Science Fiction: The Expanse

Based on James S.A. Corey’s award-winning novels (and subsequent television drama), The Expanse RPG helps you role-play in a sci-fi solar system where humans are divided and alien forces are stirring. This one uses the Adventure Game Engine rules for fast, familiar mechanics, but brings in spaceships and solar colonies to create a universe that feels "true to the book [and] show," according to reviewers.

One reviewer wrote: "Just finished reading the rule book and about to start a campaign. Very well thought out, and very true to the feel of the original. They've even included a section on orbital mechanics! (Without going into the minutia that would make the game drag.)"

Shadowrun is one of the most popular futuristic RPGs — but given that it can be overwhelming with its several editions (and the most recent ones aren't that highly reviewed), there has been a lot of hype surrounding this new dystopian alternative: Cyberpunk Red. This particular starter kit is based on CD Projekt's Cyberpunk 2077 video game and is a preliminary for the core rulebook, which is due out in June 2020. However, it comes with everything you need to bring this Cyberpunk world to life, including two booklets, six pre-generated characters, six themed dice, maps, and standees.

One reviewer wrote: "Great starter box for the up and coming 'main RPG game'. Very well presented and they've sorted out the 'hacking' / hackers player role in the last Cyberpunk 2020 game edition."

7. For Fans Of Lovecraftian Horror: Call of Cthulhu

Monsters, dark secrets, cults — If you love atmospheric Lovecraftian horror, Call of Cthulhu has everything you'd want in an RPG. Each person acts as a detective on a single team, and you're all trying to solve mysteries and uncover horrors — but be careful, because the more you learn, the faster you'll lose "sanity points." Since it's a starter set, it comes with three reference books, five ready-to-play characters, blank investigator sheets, role-playing dice, and props.

One reviewer wrote: "I wanted to do something different with my D&D gaming group for Halloween, so ordered the starter set after seeing the Critical Role one-shot. It went spectacularly [...] A fantastic introduction to a game with a rich legacy, and for anyone looking to branch out from Dungeons and Dragons, this is a great starting point."

8. A Brilliant Crossover: Dungeons & Dragons Vs. Rick And Morty

This brilliant boxed set combines the rules and gameplay of D&D with the cult-favorite animated show Rick and Morty. The rulebook is annotated by Rick, the Dungeon Master screen has art illustrated by Jim Zub, and the five character sheets and 11 dice are customized to fit the theme. Buyers have called it "amazing," "hilarious," and "easy for beginners," which explains the 900-plus reviews and 4.8-star overall rating.

One reviewer wrote: "Huge fan of both franchises and I love this mix [...] The sidebar comments Rick makes are very relatable and I think this version of the starter kit is the best one to get people to start playing D&D."

In World War II, a group of women pilots fought for the Soviets, flying outdated biplanes, cutting their engines to remain silent, and dropping bombs on the Germans for 1,100 nights in a row. They earned the German nickname Nachthexen — or Night Witches — and this history-based RPG lets you play as them. It's ideal for groups between three and five players using the Apocalypse World rules, and it paints a very real universe with feminism, Nazis, and more.

One reviewer wrote: "Night Witches is a very interesting game [...] The setting being the Russian front of WWII and the topic of play being 'what it means to be a woman pilots when your country doesn't want you fighting,' makes this game highly intriguing."

Finally, there's the Pathfinder beginner box which is a bit of an investment but is "worth every cent," according to reviewers. It submerges you into a world filled with dragons, deadly battles, and challenging adventures, and it includes everything you'll need for countless hours of gameplay: the Hero's Handbook, a Game Master's guide, a transition guide, seven dice, 80 pawns, and four pre-generated character sheets. No wonder it has a 4.7-star rating and nearly 300 reviews.

One reviewer wrote: "Excellent quality. I've dabbled in RPG's in the past but wanted to start my own game. This is a perfect starter set, it has a really natural way of gearing you up for the full game whilst being satisfying enough to fully engage with just as it is."