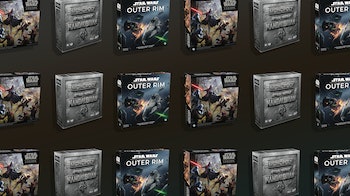 It turns out diet and exercise aren’t the only keys to living a long life. Research has found that connecting with friends and loved ones on a regular basis can, in fact, help lower your mortality risk by up to 65%. And what better excuse to get together than a cutthroat board game, especially when it centers around the best franchise of all time: Star Wars. Whether you’re Rebel scum or embrace the power of the dark side, the best Star Wars board games recreate your favorite aspects of the saga with nuanced gameplay and iconic characters.

Most games focus on the battle between the Galactic Empire and the Rebel Alliance that hinges on episodes four through six, but expansion packs make it possible to incorporate multiple storylines. If you’re looking for something on the fringes of the galaxy, there’s a game dedicated to villains and scoundrels — plus roleplaying that lets you create your own game for something both nostalgic yet completely new.

The games below vary in terms of their number of players, duration of play, and price, so there’s something for everyone. Whether you’re interested in an easygoing two-person card game or a detailed set-up that guarantees hours of play, you'll find your match here. You’ll notice a lot of the games below are made by Fantasy Flight Games, a brand known for creating some of the bestselling role-playing games and fan-based games on the market. But they're not the only brand in town: There are also Star Wars versions of classics like Monopoly and Risk that take familiar setups to a galaxy far, far away.

No matter which play style you prefer, these eight games are worth the Imperial credits. May the Force be with you.

1. A game that puts you in command of the original struggle between Empire vs. Alliance

Star Wars: Rebellion is nostalgic yet completely original, combining a tabletop board with cards, dice, and 150 miniatures to replicate the battles between the Empire and the Alliance that are central to the original trilogy. Not only must you command your army but also convince (or coerce) other planetary systems to join your cause. Well-considered details include outsized resources for the Empire, but Rebel scum have the option to employ guerrilla warfare, both of which simulate realistic conflict. Use strategic moves to recruit your heroes (or villains) of choice or sabotage them with iconic plays like stolen plans and untimely carbonite.

"The combinations of your own thematic Star Wars adventure are endless," one reviewer noted, adding that gameplay was solid. "The Death Star might be destroyed at Kessel. Princess Leia might be frozen in carbonite. Lando Calrissian might train with Yoda to become a Jedi."

Two to four players will get three or four hours of play out of this game — perfect for queueing up a few movies in the background.

2. The Star Wars board game with miniatures that you custom paint

A big draw for über-fans is Star Wars: Legion, another pick from Fantasy Flight Games, which focuses on ground combat and comes with paintable miniatures. It's an opportunity to create a truly custom set of miniatures, which has spun into a hobby all its own, and the core set you get with Legion is a fully functional starting point with main characters and iconic equipment. Build your infantry troops, then send them into battle with brilliant gameplay that allows for plenty of curveballs to mimic the heat of battle with ambushes and reinforcements.

Two players compete in six rounds to grapple for opposing objectives, calling on the Force and deploying Jedi mind tricks for up to two hours of play. The core game represents a starting point for serious collectors, and expansion packs let you customize your set with additional storylines (like Clone Wars) to entire units of Wookiees and Stormtroopers, plus individual characters like Boba Fett.

"Each miniature is highly detailed and easy to assemble. No plastic cutters needed and very little clean up," one fan pointed out. "The rule book included is very well written and easy to follow...Everything included in this set at retail would cost you almost $200."

Set at the end of Return of the Jedi, Risk: Star Wars Edition centers on the original trilogy's climactic finale. Two players — or two teams — compete across three arenas, with the dogfight to destroy the Death Star caught in the center between the battle on Endor and Luke's showdown against Darth Vader. Complicating matters is the fact that the Rebels must first destroy the shield generator but, if Vader loses to Luke, the Empire will suffer a blow.

Fans were quick to point out that this game played less like classic Risk and more in line with The Queen's Gambit but is great fun nonetheless. "It's a fast paced and intense strategy game that doesn't bog you down with tons of complicated minutiae," a reviewer commented. "It's straightforward enough that it's not confusing but there's still plenty of different ways to progress your forces so as not to be predictable."

This game can be played in as little as half an hour, which is a substantial improvement on the original, but it can also be drawn out for as long as you please.

The Death Star has been destroyed, but the battle is far from over in Star Wars: Imperial Assault. Rebel operatives compete against the mighty Empire in this strategy game that offers options for skirmish and campaign modes so you can play cooperatively with friends (aka combine forces as Rebel fighters against one person at the helm of Imperial troops) or against a single player as each person commands their battalions. Both sides gain new skills and strengths as they go head-to-head in over 30 opposing missions, but failure comes with its own set of consequences. The open storyline and brutal cause and effect, coupled with a double-sided board, make for a completely different game each time you play, and it's just as easy for newbie gamers to grasp as it is engrossing for dedicated fans.

"In terms of what you get in the box, this game is very impressive," one shopper wrote. "Once you know how to play it's very easy to introduce people to the game...it keeps things moving fast without requiring much interpretation," they added, dubbing it "a solid addition to the game collection of any Star Wars fan, or even board game fans in general."

Although this game isn’t marketed for its miniatures, more than one player confessed to painting 'em up.

5. A classic game with a new objective

One of the most iconic board games of all time, Monopoly Star Wars: The Mandalorian pairs familiar gameplay with fan-favorite twists. Your mission? Protect The Child, who moves from player to player and gives them extra abilities. You'll need them, too, with Imperial pawns to confront including Moff Gideon, Incinerator Stormtroopers, and Death Troopers that lend extra complexity to the game as they seek to "bring you in cold."

Instead of purchasing property like you do in the original game, here you invest in hideouts — then charge rent when other players need cover. If The Child falls into Imperial hands, however, the game is over. This is actually a good thing, as it short-circuits the potential for never-ending games that plagued the original. You'll find that this version is collector quality, with solid metal figurines and top-notch thickness to the cards and board that lend an all-around nice feel to the gameplay.

"Monopoly usually takes HOURS to play, with no end really [in] sight unless someone goes bankrupt or gives up,” one reviewer wrote. “This version has an objective. I like the fact that Grogu gets passed around because everyone wants to save him in the end. I love this version."

6. A game for Rogues, Bounty Hunters, & Nerfherders that you can even play solo

If your personal alignment waffles between chaotic good and chaotic evil, Star Wars: Outer Rim is calling your name. The game casts you as one of eight notorious outlaws and tasks you with personal missions from smuggling to bounty hunting. Build and modify your ship, recruit some crew, and sabotage other players — but try not to get caught by the Empire as you make a name for yourself. It's one game you can even play solo (pun intended), though up to four players can immerse themselves in hours of scum and villainy.

Fans loved it for the on-point theme that was a refreshing alternative to the main plot, calling it an overall great game that was easy to learn. "Should I blow my last eight hundred credits on that blaster? Or buy the cargo for two hundred that can get me payed two systems away," one fan mused. "When we destroy this copy from overplay, I will purchase another."

7. A role-playing game that lets you create your own saga

Embrace the power of the LARP side in this Star Wars roleplaying game that’s beginner-friendly. Since you control the narrative, no two games are ever the same. Choose your character, write your own story, then roll the dice — and hold your breath. It's a learn-as-you-go game that's easy to pick up and not too "rail-roady" for experienced gamers. Three to five players will get a lot of fun out of this one for up to three hours, and the adventure can be continued online.

"We are avid tabletop and RPG players," one reviewer explained. "We put together a group of friends to play the game and are having a blast...The pre-gen characters and stories are nice for busy adults who don't always have time to write stories and roll up characters."

For experienced players, go deeper with the Core Rulebook and upgrade with some Special Modifications or venture Beyond The Rim. For a Jedi versus Sith narrative, Force And Destiny has the metaphorical droids you're looking for.

Two players duke it out as Rey and Poe versus Kylo Ren and Captain Phasma in Star Wars Destiny. Try to incur the most damage on your opponent in this card and dice game that centers on episodes seven through nine. It's easier to set up than most other games on this list: perfect for when you want a hit of nostalgia without major effort. It plays quickly — you'll speed through in about 30 minutes — but there are multiple expansion packs to extend gameplay, from Luke Skywalker to General Grievous.

"Be warned: if you are a Star Wars fan or tend to get [hyped over] collectible card games, this could be the portal to an expensive hobby," one reviewer joked. "However, this set works just fine on its own. I probably played fifty games before picking up additional booster packs, and was not yet bored with these two decks."