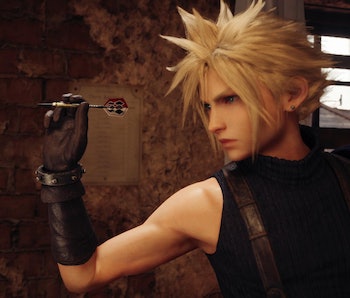 Landmark titles are rare in video games. Sure, there are lots of good ones out there, and every year sees a GOTY field full of contenders who boast adoring review scores by the bucketful. Yet it is increasingly rare for games to take on such massively influential status that fans are clamoring to play them again and again for decades. Do you really think people will be asking for Animal Crossing: New Horizons on whatever the Nintendo Switch is in 20 years? I will bet you a fat stack of turnips they will not.

So if you’ve subscribed to Playstation Plus, listen up. Because one of those legendary once-in-a-generation remakes is available for you to download to your permanent library this month. It was even a GOTY contender in 2020 despite the fact the original title dropped all the way back in 1997.

Believe it or not, there are actually quite a few people who have not yet played FF7 Remake. It’s an intimidating purchase! There’s so much hype, so much fandom, so much complicated lore surrounding this RPG gem that you can forgive people for finding it less than approachable. Of course, they’re missing out, which makes this Playstation Plus offer one they shouldn’t refuse.

For the uninitiated, FF7 Remake is much more than a reskinned reboot of a 90s classic. Square Enix rebuilt everything from the absolute foundation of the game to retell an already epic story. The zany humor is on full display alongside breathtaking melodrama as you follow Cloud and his ragtag band of rebels, collectively known as Avalanche, through the first few chapters of his conflict against Sephiroth, et al. (You may remember him as the long-haired fella who stabbed Mario in Smash Ultimate a few months back.) The remake isn’t even the entire story. We actually don’t know how many more parts Square Enix plans to make, but this release will take new players 40-50 hours to finish, if not more.

The story is incredibly intricate almost to a fault. But what FF7:Remake does so well is enhance the story with jaw-dropping visuals and an overhauled combat system that makes the dungeon grind one of the most satisfying you can come across. If you’re thinking of the classic turn-based RPG combat of yesteryear, think again. This is a modified, action-driven combat system where party members still play key roles (Barret is a tank, Tifa is DPS, etc) but the pace is fun and frenetic instead of terse and tactical. There’s deep customization to be found in the game’s Materia system, which will task you with upgrading or swapping different abilities to counter a wide range of foes. The boss fights are no joke, so don’t think you can just waltz in with the same set-up you’ve been using to thump goons.

FF7: Remake is a near-perfect RPG by modern standards, but as a reenvisioned classic it set a bar so high it’s doubtful any other IP will even attempt to reach it. For that reason alone it’s worth adding to your collection, if you haven’t already. Is it a little dense and more than a little intimidating to new players? Sure. But if you’ve never played it now is the perfect time. Once you download it off Playstation Plus it’s yours forever, so you can enjoy it in an atmosphere free of hype and FOMO.

Take your time, relax, and think of the Honey Bee Inn.

More like this
Gaming
Feb. 1, 2023
The Best Video Game Ever Made Just Got Its Own Holiday
By Hayes Madsen
Gaming
Jan. 27, 2023
Dirge of Cerberus is still the most incoherent Final Fantasy game ever
By Willa Rowe
Gaming
Jan. 31, 2023
GTA 6 Leak Suggests the Game Could Come Out Sooner Than You Think
By Hayes Madsen
LEARN SOMETHING NEW EVERY DAY.
Related Tags
Share: