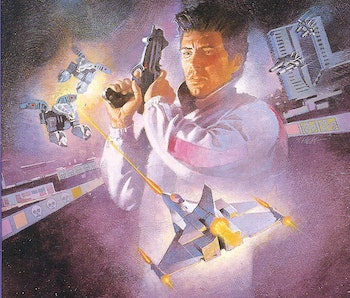 In the early 1970s, two brothers in Tokyo started a company selling radio equipment that they named, for some reason, after a type of train they liked: the Hudson. This didn’t go very well, and soon they started branching out to other electronics, like personal computers and video games.

By the mid-1980s, the company was in solid shape, in part due to its unique marketing in Japan: it created the Hudson All-Japan Caravan Festival, a competition for shoot-’em-up games it promoted with a big yellow van it drove around the country. A key part of this festival was a 1986 game that now resides on the Switch: Star Soldier.

Star Soldier is a spiritual sequel to a Hudson game called Star Force, and is a slightly more developed version of the same concept: shoot everything you see, in space. The player-character, which fan wikis tell me is referred to as a Caeser, can move all around the screen as a variety of enemy sprites fly at them in various patterns. Beyond moving at a lightning quick pace and keeping the trigger finger locked down, the game’s one element of strategy involves cover that protects the player. With a trade-off that the player can also not attack, it came off as slightly confusing during gameplay.

The plot essentially consists of Starbrains invading the galaxy and needing to be stopped. The player encounters these Starbrains at the end of every level during a repetitive but particularly challenging fight: the Starbrain attacks you and sends out energy balls known as Solpas that follow you around the screen. Ducking and dodging is a challenge, and if you can’t beat it during the allotted time then you get shunted back to the beginning of the level to try all over again.

One big advantage (the only advantage, honestly) that the player gets are in power-ups, which were still relatively new at the time of the game’s release. Just a year earlier, Super Mario Bros. had introduced the concept of the Super Mushroom that allowed a character to grow in size. In Star Solider, players get more and more ways to shoot. Powering up in Star Soldier means firing in four directions, and the sudden feeling of leveling the playing field is very fun.

There are a few fun design elements in these levels, from a space desert with skulls to the creepy green eyes and giant Zardoz–style head that seem to be watching the player as they zoom around. Some of the enemies resemble ships, but they’re just as likely to be abstract designs like butterfly crosses or sea shells. The Starbrains themselves aren’t much more than giant ships, but they do come with great player prompts like “Brain escaped!”

In the mid-1980s, Hudson Soft was a big deal in Japan. One of the earliest third-party companies to find their way onto the Famicon (the “Family Computer,” as the NES was called), the company had made their presence felt through games like Bomberman and Lode Runner. Star Soldier quickly became the focus of the competitive Caravan, selling over a million copies at the time.

Hudson Soft would continue on into the ‘90s, even launching their own game console, the PC-FX, that was meant to be upgradable like a personal computer. The system created something of a console war in Japan, at one point even outselling the Famicom. But outside factors stacked up against the company: its bank, one of the country’s largest financial institutions, collapsed under bad debts. Vulnerable on the open market, occasional collaborator Konami began taking a larger and large investment in the company, formally making Hudson Soft wholly-owned subsidiary in 2011.

While Star Soldier is not the most innovative game on the NES, but it harkens back to an era that fans remember as a “golden era” of shoot-’em-ups: a time when the arcades were booming and players were starting to understand the power of gaming communities. The one thing that would make it better? A big yellow van.