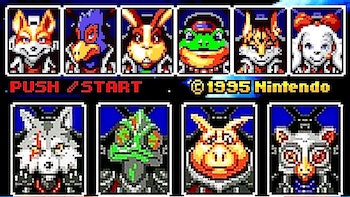 Video game records are meant to be broken, but Star Fox 2 holds a record that will likely stand the test of time: 22 years between development and release. The game’s cancellation and eventual release tell the story of the video game industry at two very different points in time. Even beyond the unusual circumstances of its release, it’s a pretty fun game that showcases ideas that would later become commonplace throughout the industry.

The Star Fox 2 story starts, predictably, with the original Star Fox. The 1993 game had already pushed the Super Nintendo to its technical limits with the Super FX computer chip, which boasted the first 3D graphics for a home gaming system. To quote series creator Shigeru Miyamoto, Nintendo and British Argonaut Software wanted to “make a full-fledged game using polygons.” With memorable characters based on Japanese mythology and a fast-paced rail-gun playstyle, they had a critical and commercial success on hand.

Everything was lined up for Star Fox to become a long-running franchise. Dylan Cuthbert, lead programmer on the sequel, told Ars Technica in 2017 that “there was no wait-and-see, and Argonaut had a three-title deal with Nintendo.” As soon as European and competition versions of Star Fox were complete, Cuthbert was quickly put on the team with a pair of Japanese programmers.

As a sequel, it was only appropriate that Star Fox 2 use Super FX 2 chip, which was able to double the game’s memory, render hundreds of 3D polygons, and scale 2D graphics for a three-dimensional effect.

Their work was ready to show off by the Consumer Electronics Show, or CES, in Las Vegas in January 1995. (The first E3 gaming convention, a spin-off of CES, wouldn’t take place until later that year in May 1995.) Early critics liked what they saw, and Nintendo and Argonaut left with clear proof that people were interested: somebody even tried to steal their demo off the CES floor.

But Nintendo was facing an unavoidable reality: while it may have taken console gaming to new heights, they were no longer the only major player in the industry. Before the 1995 CES even took place, in fact, they had found themselves in the unusual position of being behind. In December 1994, one-time Nintendo partner Sony released the original 32-bit PlayStation in Japan. The machine sold out instantly, and even Sony had to also deal with the release of the similarly advanced Sega Saturn.

The Super Nintendo had fended off more advanced rivals before, with the incredibly popular Donkey Kong Country. This time, however, there was no denying the superiority of these systems. The games on the PlayStation felt like they were bringing arcade boxes into the home, while Star Fox 2 looked distinctly of its generation. On top of that, it was going to be expensive, thanks to the Super FX 2 chip.

“The price was high and the timing of the release was awkward,” Miyamoto recalled to Nintendo, describing a lethal combination for any commercial project. Despite completion, the game was shelved and attention was focused on Star Fox 64.

The moment for Star Fox 2 would finally come in 2017, when Nintendo was looking back in a wave of nostalgia. The success of the plug-and-play NES Classic had made a mini-SNES inevitable, and Miyamoto concluded “it would be a waste “ for a storied, completed game to remain on the shelf with such a viable option for release.

The game itself takes full advantage of the Super FX 2 chip, expanding on many of the concepts found in the original. There are more characters to choose from, helpfully outlined in the manual Nintendo uploaded with the game’s release. These characters come with ship varieties, allowing for players to value shields or speed in their choice.

Variety is the name of the game in Star Fox 2, which allows the player to essentially custom-build their own adventure by picking which planets they want to strike. The plot of Star Fox 2 regrettably speaks to the game’s hasty production: the nefarious Andross has remarkably survived the events of Star Fox, and it’s up to Fox McCloud and his team to protect the planet Corneria and the Lylat System yet again.

While the plot is a rehash, it allows the game to try out its new mapping system. There are essentially two battlegrounds in Star Fox 2: a level you play through, which holds the same rush as the original, and the map, which feels more like chess. The Super FX 2 chip allows the game’s map to take on the feel of a real-time strategy game, with enemies constantly moving and planning. Players can heal themselves at a moveable mothership, and the ship’s placement can be as important as any laser blast.

Star Fox 2 also allows players to transform their ships into walkers. This could have been something much larger. Talking to Ars, Cuthbert describes the game turning into “a dungeon crawler.” These were pared down to a few segments, and it’s easy to see why. While walking can have its advantages, like easier aiming, the mechanics of walking can feel a bit bulky.

Star Fox 2 is fun, but it’s understandable why Nintendo balked of the prospect of pitting it against the PlayStation. Luckily, players today need not concern themselves with the changing tides of the video game industry of 1995. Star Fox 2 remains fascinating for its attempts to push the limits of what could be done at the time.