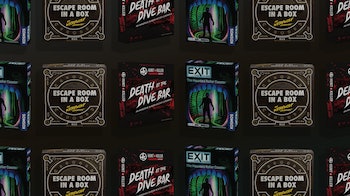 Escape room games not only make for a fun night-in, but did you know that playing games actually has a ton of benefits for your mental health? Studies have shown that solving puzzles, like the riddles and clues found in escape rooms, can help maintain brain health. The best escape room board games have plenty of interactive pieces and puzzles that emulate the immersive escape room experience in the comfort of your own home.

Like in-person escape rooms, escape room board games are filled with physical elements you can alter or investigate for clues. Some games require you to permanently alter the game pieces to “escape,” so they can can only be played once, while others can be reset so you can play again. Your play time will depend on how quickly your group solves the puzzles, but for single-use games, it’s a good idea to invest in one with a longer play time so you can get the most out of your purchase.

Unlike traditional board games, player ranges for escape room games are more of a suggestion than a hard and fast limit, but playing with more people can result in having more participants than puzzles to work on. Hints are another feature that can make your escape room game experience more enjoyable. Since there is no game master present to guide players toward clues, most options have a set number of hints in case your group gets stuck. Even if you’re an expert puzzler, it can be nice to have helpful hints on hand.

If you’re ready to break out of your game night routine, read on for five of the best escape room board games — and they start at just $15.

Escape Room In A Box: The Werewolf Experiment
Amazon

There are 19 puzzles your group will have to solve in order to complete this escape room box set. To set the scene, players have an hour to solve the box’s puzzles before a mad scientist turns them into werewolves, but you can take your time with this at-home game if you prefer. The set comes with clues, note paper, and three physical lock boxes that players must open to win. You won’t have to destroy the set to solve the puzzles, so you can either play this game again or pass it along to friends to reduce waste. You can also connect this game with an Amazon Alexa device to make the experience more immersive. Reviewers loved that this set was challenging enough to make it engaging but didn’t have any red herrings or frustratingly hard puzzles.

One reviewer wrote “Great game, played it with a group of six people, everyone had a good time. In this game it's important to pay attention to details. Some of the things I liked about it is that: although it's not an easy one, if you look hard enough and pay attention to clues and details it all make sense in the end, like a well written mystery; as well there are no red herrings in this game, they made it challenging without making it frustrating. 6 out of 6 people I played with said they really liked it, although it took us an hour and 9 minutes to solve it.”

2. A beginner-friendly escape room game with a roller coaster theme

Exit: The Haunted Roller Coaster is great for those who are just beginning to dip their toes into escape room puzzles. The Kosmos helper app makes it easy to find and reference game rules (similar to how a game-master would help during an in-person escape room session), but it isn’t necessary for gameplay if you prefer an unplugged experience. The set requires players to solve riddles and decode ciphers with the included decoder wheel. You will need to fold, rip, and cut the materials to solve the puzzles, making this a single-use game, but the paper and pieces are all recyclable. Once you’ve finished the game, the set comes with a fun certificate and social share-ables you can use to post your times and scores, which makes this feel even more like an in-person escape room.

One reviewer wrote: “We thoroughly enjoy EXIT:The Game sets! Each game has unique riddles and all the components needed for an exciting hour or two problem-solving together. The game does include Help Cards to give progressive clues if you get stuck, but we try to solve Be aware that the game will likely involve folding, cutting, or drawing on the game materials, making it a one-time use game. My husband and I consider it a great price for a date night together.”

Unlock! offers escape-room puzzle kits that use cards to replicate mysteries and quests for players to choose and solve. Each set comes with three different quests, and there’s a companion app that helps make the experience even more immersive — with the Star Wars set, the app plays droid noises and themed music. This game is played primarily with cards, which means you can play each quest multiple times. It’s best for those who enjoy the brain teaser aspect of escape room games, since there are no physical components to inspect or unlock.

One reviewer wrote: “I am a Star Wars junkie. I thought this looked like a fun game to try during quarantine. I was blown away. We had so much fun. the interactivity with the app is really clever. I hope they make more. I will check out the other themes, but would really love more Star Wars adventures.”

4. a horror game that can be replayed

Betrayal at House on the Hill
Amazon

If you’re looking for a more long-term game night solution and enjoy escape room narratives more than the physical clues themselves, Betrayal at House on the Hill is an essential horror board game you should have in your arsenal. You and up to five other players explore a haunted house composed of randomized room tiles (think Clue with moving board pieces) for the first phase of the game, before beginning one of the game’s 50 haunts, all of which have different scenarios and win conditions. Some haunts require players to work together and strategize to escape the haunted house, while others force players to use their wit to solve riddles or overpower the game’s antagonist. Betrayal is definitely on the complex side, and the horror elements may be too scary for younger players. I’ve owned the base game for almost three years and still haven’t completed all 50 haunts, though there’s also an expansion pack for frequent players.

One reviewer wrote: “High replayability. Everytime we play is like a completely different game with its own story. One game the house is sinking and we're trying to escape, another we're hunting nightmares come to life, it's different and memorable each time.”

5. An expert-level escape room board game

The Cursed Dollhouse Escape Room set is great for escape room veterans and other expert-level puzzle solvers. The set’s unique design consists of a [3 story three-story] dollhouse filled with puzzles and physical clues for players to examine and solve, and the game can be played in either a single long session or over the course of several shorter sessions. Since you don’t have to alter the pieces to win, this game can also be played more than once. Reviewers loved Think Fun’s spoiler-free support website for looking up clues and finding music suggestions to set the mood of your at-home escape room experience.

One reviewer wrote: “Loved the depth of the game, quality design and good puzzles. There was only one puzzle my group felt was a bit too far of a reach, but that is always subjective. And the hint system was well done as well. Still one of the best escape room game makers out there.”

Hunt A Killer: Death at the Dive Bar
Amazon

If your favorite part of an escape room is interacting with physical objects and using them as clues, Hunt-A-Killer’s murder mystery box has plenty of fun pieces that players use to discover the identity of the murderer. While you don’t “escape” to win this game, Hunt A Killer’s mystery sets have similar puzzle-solving elements to an escape room, including paper documents related to the case and physical clues like the bar’s matchbox and coasters. If you ever get stuck, there’s a meticulously organized hint and reveal page that points you in the right direction without spoiling the fun of solving the puzzles yourself. If you’d like a mystery-solving experience that you can play over multiple sessions, you can also buy the Hunt-A-Killer season bundle. Note that this game can only be played once.

One reviewer wrote: “If you love puzzles and escape rooms this is a fantastic choice. My fiancé and I had a blast with this game. The items in the game box are exceptionally well done including real photos, newspapers, and other real props that enhance the game. Difficulty is moderate so many people can enjoy the game. The computer also offers a hint website if you get stuck and also solutions if you need help. Took approximately 2 hours of play for us (2 people) but we also took our time and poured over all the evidence multiple times. Highly recommend this and hope they come out with more single box editions.”