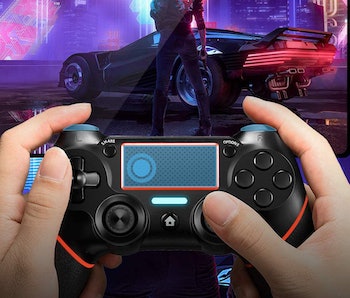 A good controller can vastly improve a game's playability, especially if you play games that were created for console and adapted to PC. On the other hand, even if something was meant for PC all along, some players simply prefer the classic controller experience over a keyboard. Whichever is the case, the best wireless controllers for PC appeal to both types of gamers, and they do so without the restriction of cords.

First, know that most wireless controllers are compatible with multiple gaming systems — either inherently or with the right adapters. Tons of gamers find that their wireless Xbox or PS4 controllers transfer to Bluetooth-enabled computers without issue. That said, if you're looking for a controller that's optimized for PC gaming specifically, some are definitely better than others. The first thing you'll want to do is check the compatibility and means of connection: Some connect to the computer itself while others use USB dongles, but either way, nothing's worse than unboxing new tech only to find that it doesn't work on your operating system.

Next, consider the interface, the extra features, and the ergonomics. In other words, does this controller have all the buttons you'll need and can it be customized to suit you? Does it have the immersive features you want like vibration? Is it comfortable to hold? Ultimately, these qualities have the potential to make or break your gaming experience, but also depend a lot on personal preferences.

Finally, narrow down a power source. Unlike wired controllers, wireless ones need some kind of battery to keep them working. Most of these require two AA batteries, but a small percentage of these controllers come with a lithium-ion battery that can be recharged which can be less of a hassle and save you money down the line.

Now that you know what to look for, here are the best wireless controllers for PC gaming.

There are several reasons why the EasySMX wireless gaming controller is a top option for PC gamers. According to its 3,000-plus reviews, buyers love it because it's convenient, widely compatible, and customizable. It also offers a strong wireless transmission for a stable signal without interference (even from far away). There are four programmable buttons in addition to two joysticks, a D-pad, and XYAB buttons. You can even customize the brightness levels of the LED lights and the intensity of the vibrations — all for less than $40.

One reviewer wrote: "I don't normally review products, but I am so incredibly pleased and surprised with how well this controller works that I have to let others know about it. It is comfortable in the hand, very responsive, great vibration, perfect weight, and has a quality feel to it [...] I own a Windows PC and play Steam games on the go. This controller far exceeded my expectations, so much so, that I am going to buy another."

2. The Runner-Up: The Most Popular Option For A Little More

Xbox is easily one of the most popular gaming consoles of all time, so it's no wonder many gamers prefer the look and feel of this classic controller. The Microsoft Xbox wireless controller features the same rounded contours, balanced feel, vibration, and traditional button placement, but it's optimized for PC with the included Bluetooth adapter. Said adapter is small, but supports wireless stereo sound and can connect up to eight players at once. The controller itself has custom button mapping and an impressive wireless range.

One reviewer wrote: "I don't think there is any other controller that can match the Xbox One controller for gaming on PC. It's simply the best choice [...] It feels great in the hand and even has a headphone jack for outputting game audio or doing voice chat wirelessly."

A rechargeable controller means you never have to waste money on replacement batteries again, and this one from GameSir supports up to five hours of continuous use on a single charge. It also has dual vibration for immersive gameplay, a 2.4-gigahertz wireless connection for a strong signal, and configurable M buttons for macros. Thanks to the semi-transparent matte cover and colorful LED backlights, it's one of the most futuristic-looking options on the market.

One reviewer wrote: "Love the feel. Works beautifully. Paired easily just use the chord the first time. Charges fast considering I played while it charged."

PlayStation is the most popular gaming console of all time — and back in 1994, they revolutionized the controller with its two-handle design. The modern-day controllers are reminiscent of the original, but they have countless high-tech upgrades that make them a favorite among gamers. This wireless PS4 controller from ORDA offers dual shock motors, a nonslip and sweatproof design, a sharing button, an on-device audio jack, vibration feedback, and sensitive gamepad buttons — but it's widely compatible with most PC operating systems. It's also rechargeable, ergonomic, and has a sleek mini lightbar.

One reviewer wrote: "It is easy to transition from PS4 to PC gaming using this product." Another noted, "Great quality controller, paired easily with my PC, works flawlessly with Steam and I appreciate the textured handles."

5. The Most Comfortable Controller

If comfort is your top priority, the Logitech Gamepad F710 is most conducive to long gaming sessions. For one, it's more compact than others, so (especially if you have small hands) you won't have to strain while reaching for the controls. Its ergonomic curves and contoured rubber grips are also designed to stay comfortable for the long-term. Like Logitech's best-selling wired controller, this one has customizable controls and a tactile D-pad, but unlike the original, it offers dual vibration motors and 2.4-gigahertz wireless connectivity. (However, note that it's not compatible with Windows 10.)

One reviewer wrote: "It's not a flimsy piece of plastic. Very comfortable in the hand, and weighted well. All the weight is in the center, giving you a better grip and balance."

6. The Most Versatile Controller

For those who like to switch between systems, the SteelSeries Stratus Duo is designed to pair with Windows, Android, and VR. This multi-platform controller has Hall Effect magnetic triggers, precision joysticks, smooth actuation, and over 20 hours of battery life on each charge — plus, you can even play while charging. Last but not least, it works with over 5,000 controller-enabled games on Steam, and it doesn't require any drivers or software to do so. However, it's important to note that it does not vibrate.

One reviewer wrote: "This controller has a great feel and works well too. It pairs easily and I have tested on PC and Android phones/tablets and it works as it should. if I were to have to buy another Bluetooth controller I'd likely buy another one of these."

7. A Wireless Pick For Serious Gamers

It's an investment, but if you're looking for a premium controller that takes PC gaming to the next level, many buyers recommend the ASTRO C40 TR. While it was initially designed for the PS4, it connects to PCs using a wireless transmitter (and it can also be used with the included USB cable if you don't want to deal with charging). It then offers countless customization options, both in terms of the configuration software and the swappable stick modules and D-pad. It also has a touchpad, ergonomic rear buttons, trigger stops, high-fidelity game sounds, strong vibration, and voice chat, all combined with a 12-hour battery life.

One reviewer wrote: "Best aftermarket controller for PS4/PC. Sticks and buttons feel great and under side buttons are in the perfect spot! The customizable stick placement and button mapping are awesome features. The downloadable software is easy to use as well. Overall best controller I’ve ever owned and will probably buy a second!"