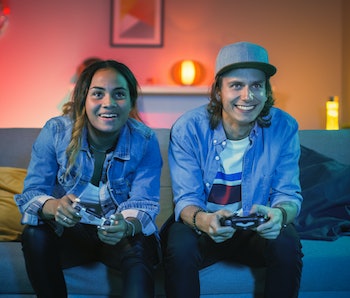 There are two main reasons why you might want to opt for one of the best third-party Switch controllers instead of Nintendo’s Joy-Cons or Pro Controller. The first and biggest is the price. Nintendo's controllers tend to be expensive, with a pair of Joy-Cons clocking in at an MSRP of $80 while a Pro Controller isn't much less than that. The second motive is size and maneuverability. For some gamers — especially those with larger hands — the compactness and small buttons of the included Joy-Cons make it difficult to maneuver when playing, and if you don't want to throw down for Nintendo's $70 Pro Controller (or want a headphone jack) there are great third-party options for that, all while still having most of the same features like motion control and 10-plus hours of play on a single charge for the wireless models.

When you’re shopping around for a controller alternative, consider your gaming style and the features that matter the most to you. The Switch only has a headphone jack on the console itself, neither Joy-Cons or Pro Controller feature this option for easy audio connection, so if you like to play in teams and communicate with your squad, you might want the controller below with a built-in 3.5-millimeter jack audio connection to enable chat. Other cool extra features include grips for greater control and more comfort. There’s even an adapter solution that lets you use your favorite controllers from PC, other consoles, and even fight sticks to work with your Nintendo Switch.

To help you find a controller to fit your playing style, here’s my roundup of the best third-party Switch controllers to level up your gaming. All of these top-rated picks are Nintendo Switch compatible and at less than $40, a lot nicer on your wallet.

If you want a Joy-Con alternative at half the price, the Jalvde wireless Joy Pad controller is worth considering. This controller looks similar to the original Joy-Cons but has wider ergonomic sides for a firmer grip. They're great for gaming for extended periods or as a backup for when friends drop by. The left and right Joy-Con controllers can be used separately or together. Plus, just like the original Joy-Con controllers, they pair automatically to your Switch and have built-in motion control features, and work wired or wirelessly. However, the battery only provides up to 10 hours of play on a charge, compared to the Joy-Con's 20. You can get these controllers in neon pink and green, neon purple and orange, neon brown and yellow, and neon red and blue.

Most importantly, players found that they compared favorably to the original Joy-Cons. "I purchased this because my original controller was broken. I think this is a good replacement. It works the same as the original controller with some added bonus. The battery is much longer now and the design is ergonomic. It is comfortable and easy to hold," one customer wrote. A drawback though is that a few reviewers noted that the vibration feature was a little too intense and it doesn't do amiibo.

The Esywen wireless controller for Nintendo Switch offers a similar layout and features as you'd find on the Pro Controller for less than half the price. It has gyro motion controls, like the Pro Controller, so that you can play popular games like Splatoon 2 and Mario Kart easily. And also features joysticks and directional pad for that gamepad control feel. The wireless unit pairs via Bluetooth, and the battery lasts up to 15 hours on a charge (lower than the Pro's 30-plus hours of gameplay). You'll need to have a Type-C USB cable or buy one to charge it, though.

The joystick and D-pad layout on the left side don't exactly match the Pro Controller's, but reviewers have given this a 4.4-star overall rating and say it definitely stacks up against the Pro. "It feels good to hold and functions just as good as the ProController. It's considerably lighter to hold than a ProController. The DPad and Analog sticks feel more responsive. It works fine wireless or wired, I had no issues with input lag in either mode," one customer wrote. However, they added: "Rumble is fine, sometimes it's a little over-aggressive and shakes twice as hard as a ProController in certain games which can be distracting." There's also no amiibo reading.

If you find your controller always falling out of your hand, give the Beboncool wireless controller that’s compatible with both the Nintendo Switch and Nintendo Switch Lite a try. It features motion controls and gyro sensors for playing interactive games like Splatoon 2, like the Pro Controller. And this wireless controller has Bluetooth pairing with a battery life of up to 15 hours. This controller includes a micro-B charging cable so you don't have to buy it separately. The layout on this is a bit different than the Pro Controller, but if you would appreciate the extra grip on the sides, reviewers have been happy with it. While a few customers wished the D-pad was a little more prominent and not so easy to hit the wrong button, and it doesn't have rumble or amiibo reading, it has gotten a 4.3-star overall rating.

"Looking for a cheaper option to the ProController, I came across this one and decided to try it out. I'm really glad I did! I love the layout of the buttons and D-pads compared to Nintendo's layout. It's very comfortable to use, and I love the fact that it's lightweight and doesn't cause hand fatigue as much. The battery doesn't last nearly as long as I would like it to, but an extra long USB cable solves that problem easily enough," one reviewer wrote. At less than half the price of the Nintendo version, the price is right.

4. A Wired Switch Controller That Lets You Plug In Your Headset

The PDP Nintendo Switch audio wired controller is one of the first Switch alternative controllers to offer a headphone jack. The built-in 3.5-millimeter audio jack supports both in-game audio and USB chat, so you can communicate with other players and lead your team to victory. The audio can also be quickly adjusted using the D-pad on the controller. It features dual programmable buttons on the back of the controller to help you customize your gameplay. However, there is no motion control or rumble features like the Pro Controller. Despite being a wired controller, players have a lot of freedom to move while gaming with the 10-foot USB cable that's included. Another cool feature to this controller is the interchangeable faceplates that snap on and off. Plus, it's officially licensed by Nintendo so it's been vetted for quality.

"The grips feel great, the weight feels great, the ten ft cable reaches everywhere in the room, the two mappable buttons on the back come in handy, (I use them mostly to swap out an analogue stick click) but the winner-winner-chicken-dinner is that mic man. So clean, so clear. I bought it for DC Universe Online for switch and I cant praise it enough," one customer raved.

Also Great: An Adapter That Lets You Use Your Favorite Controller With The Switch

If you already have a controller you like and want to use it with your Nintendo Switch, look no further than the Mayflash Magic-Ns Bluetooth controller adapter. This cool device lets you connect your wired PS4, PS3, Xbox One, flight sticks, and even wired USB controllers like Logitech rumble gamepads to your Switch. This easy-to-use adapter plugs in and pairs via Bluetooth to connect your controller. Its LED indicator lights up when you’re connected and ready to play.

"After buying 2 Switch Pro controllers (at $70 a pop mind you) I didn't want to spend another fortune on a controller to play 4 player. I have XBONE 1 and PS4 controllers laying around and this fits the bill! You must flash it on their website (and you must extract the RAR file with an application) once that's done, binding the remotes are easy, both Xbone and PS4 controllers work well with very good range wirelessly, they even bind them with Nintendo controls like picture snap and home," one customer wrote.