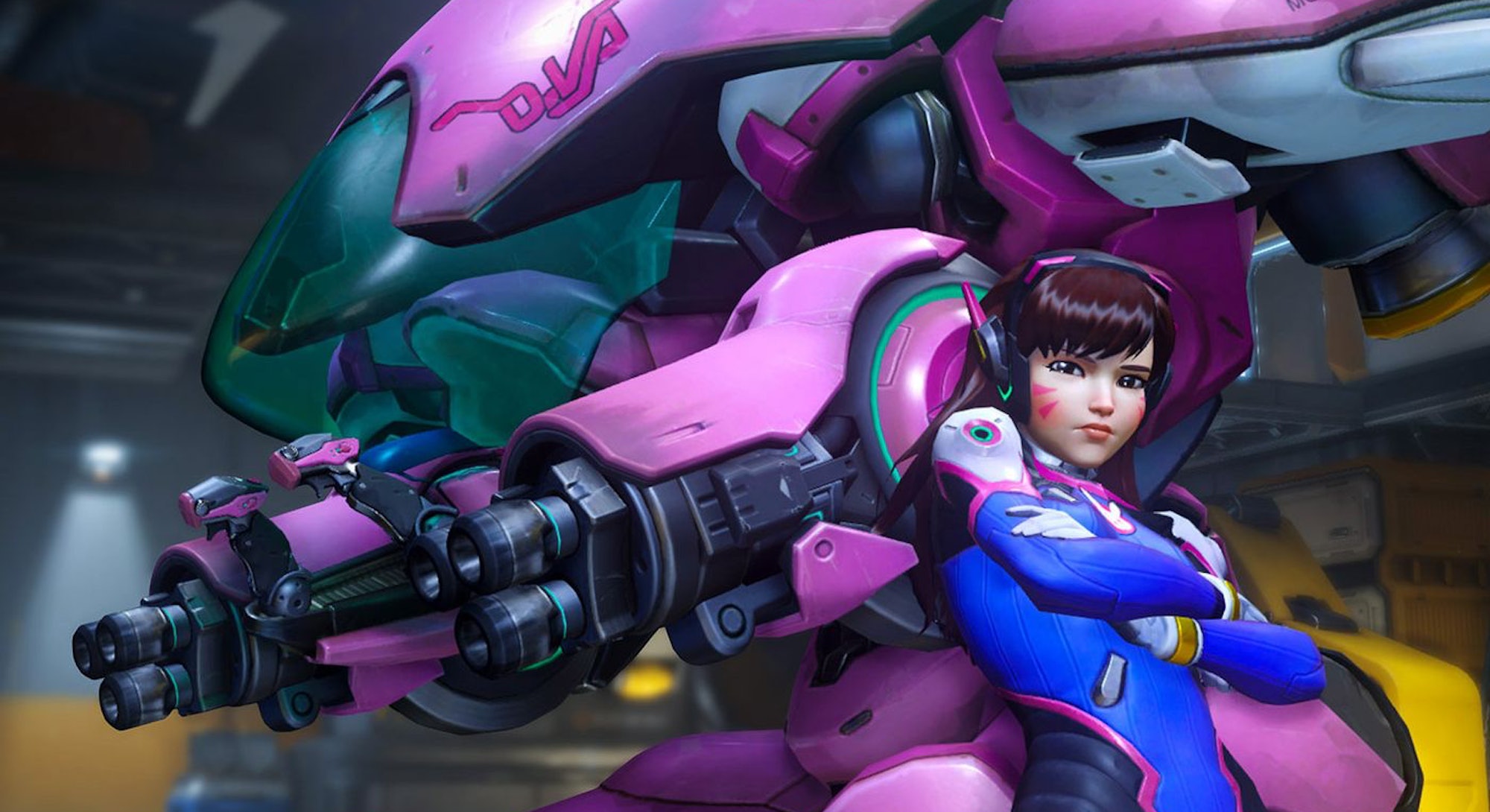 Charlet Chung had been a professional actor for eight years when she auditioned for the role of a video game character in Overwatch.

“They showed me a generic K-pop star,” Chung tells Inverse.

At the time, the game was still in development, and her character's look wasn't yet finalized. The developers at Blizzard Entertainment showed her concept-art comprised of results from Google Image search. The character was a "pop star gamer," they said.

She didn’t realize it then, but Chung's life would never be the same.

Chung, 37, is a native of Diamond Bar, California, an L.A. suburb where half the population is of Asian descent. She was raised by first-generation immigrant parents — her father is Korean and her mother is Japanese.

A lifetime of listening to hybrid accents made her uniquely equipped for the role.

At her audition, Blizzard liked what they heard when she gave a voice to the Overwatch character of D.Va, the South Korean pro-gamer-turned-special agent who pilots a humongous battle robot. It helped that D.Va's spunky attitude in the game resonated with Chung's own demeanor.

“People struggle with the idea of Asians being American, because the first thing they see is an Asian face and expect you to speak whatever language.”

Playing D.Va has elevated Chung's career profile and confidence in an overwhelmingly white and male industry. How overwhelming? A 2018 report from the International Game Developers Association reported 74 percent of employees in video games are cisgender males, 61 percent white/European, and 81 percent identified as straight.

“I always looked at the things that made me uniquely me in the eyes of somebody else, and felt it was a disadvantage,” she says. “I’m small. I sound young. I’m a woman. I’m a minority. I was always called ‘cute’ and I hated that.”

In playing the bad-ass D.Va in Overwatch, Chung found a nearly perfect representation for herself — plus a giant suit of armor and machine guns.

“D.Va embodied everything I felt was a disadvantage and was a strong character,” she says. “Somebody who is looked up to. It really changed me. It changed the way I saw myself.”

Chung’s experience playing an Asian video game protagonist is one that other Asian-American voice actors are sharing. The opportunity to play heroic characters comes at a time when the entertainment industry reckons with its history casting white talent for non-white characters.

Slowly, things are changing for voice actors of color, but there are still a few things the video game industry can still learn from movies and TV.

In the wake of recent Black Lives Matter protests, the animation industry is finally reckoning with the practice, too.

As the entertainment industry seeks to be more inclusive, non-white actors in video games are finding opportunities to play heroes and villains who share their backgrounds.

Inverse spoke to Chung and several other Asian video game voice actors who hope their portrayals in best-selling hit games like Overwatch and Mortal Kombat 11 offer a form of representation that movies and TV lack.

“What’s different with video games is we have control,” Chung says. “When you’re watching TV, you have no choice but to live the story of the character you relate to. You can’t help but feel upset over caricatures written through the lens of a non-Asian person.”

Video games are limited by what a team of writers and programmers allow players to do. Some, like Overwatch, focus exclusively on competitive play rather than a narrative journey. But just having control, and seeing through the eyes of video game avatars in first-person games, is an experience other mediums can’t match.

“It’s empowerment,” says Indian-American actress Anjali Bhimani, who voices the Indian hero Symmetra in Overwatch. “Especially for first-person shooters, when you are watching something through the perspective of the character, it feels like, Oh, this is me. I hear this voice that sounds like me. You almost step into the actor’s experience of inhabiting a character and that’s a really fun place to be. Gaming is a very high form of storytelling.”

Like Chung, Bhimani was awestruck seeing Symmetra for the first time. “She looked gorgeous, strong, and brilliant,” she says. “Everything you want to be in real life. To see that as a South Asian female character was mind-blowing. I was not prepared for how cool she was going to be.”

“It wasn’t until they started trying to cast actual Asian people in the roles of Asians that I started getting hired.”

Sunil Malhotra, an Indian-American actor who lent his voice to the Shaolin monk Kung Lao in Mortal Kombat 11, adds that games allow players unparalleled opportunities to identify with a character.

“You’re living through a character. Not just in who you shoot or punch and kick. All those things you’re controlling are combined with the emotional punch of narrative,” he explains. “That’s where the juice is for people playing.”

“Representation is extremely important, especially for younger people,” he says. “When they see someone like themselves, it expands possibilities for them. It goes for most ethnicities, but especially Asian-Americans.”

Hanzo was a character type that Nakauchi had never felt he played before: Hot.

“To voice this kind of dashing man was new to me,” he says. “Usually Asian males are portrayed as weak, ineffectual. They’re nerds or the delivery guy or a ninja, all of which I’ve played before. Now I go to conventions and sit underneath this big picture of Hanzo, and it’s rewarding to have these young kids see an Asian person voice this character.”

“There were always ninjas”

Asian-American actors have a higher barrier to entry than white actors, even when it comes to voicing non-white characters. Chung, who spent years booking TV guest roles and commercials before working in video games, recalls a time when the world of voice over was closed off to people like her.

“Before I entered the industry it was a predominately white male, if not just male industry,” she says. “It’s harder to get into voice over than television or film. It is a tight-knit community, and traditionally studios use the same exact people over and over again.”

There wasn’t one watershed moment that opened the doors for a more diverse acting pool, but it is a new development. Asian-Americans, in particular, wrestle with pursuing creative fields due to cultural expectations. Parents raising kids to become doctors or lawyers is a stereotype that many Asian-Americans acknowledge is true. Some Asian comedians even joke about it.

While Chung’s parents encouraged her interest in the arts, Nakauchi, whose parents didn’t teach him Japanese in an effort to assimilate in post-war America, had a different perspective.

“Of course my parents wanted me to go do something more professional, like doctor or lawyer,” Nakauchi says, joking, “I wasn’t smart enough.”

Nakauchi started working in games in 2004. Back then, his agents frequently sent him to auditions for ninja-like characters.

“There were always ninjas,” he says, adding that these characters were often voiced by white actors. “There were so few Asian actors. Because the talent pool for well-known actors was versatile with voices. They’d go, Can you do an Asian accent? And they go, sure.

"It wasn’t until they started trying to cast actual Asian people in the roles of Asians that I started getting hired.”

Asian-Americans who pursue video game voice acting today find themselves in a slowly diversifying field Nakauchi has been at conventions where he’s the only Asian actor in attendance.

“Even today there’s not a lot of us.”

The availability of Asian characters is also limited by the imaginations of storytellers. Asian characters in Western video games often lack identity beyond their ethnic roots and are “othered” in comparison to straight, white male protagonists.

Malhotra, the Mortal Kombat 11 voice actor, says he is unwilling to play a “generic brown guy who gets shot at for being a bad guy.” He has passed on numerous auditions as a result.

”Putting those images out there is feeding fuel to a fire," Malhotra says.

Slowly, the industry is getting better. Games like Overwatch and Mortal Kombat 11 show a way forward. In The Last of Us Part II, an Asian-American character named Jesse with no discernible accent is voiced by Stephen Chang, an Asian-American actor from Los Gatos, California.

Nakauchi, the actor who playas Hanzo in Overwatch, says that helping gamers control an authentically Asian character expands their worldview in a way no other art form can.

“Stepping into the role of a hero who looks and sounds like you can have a deeply meaningful impact on how you see the world,” Nakauchi says. “A white hero, you see it all the time. It’s reinforced. When people try an ethnic character as heroic as any other, it gives everyone a chance to learn what that’s like.”

While white actors will always have opportunities to play white video game heroes and villains — and aliens, androids, monsters, and more — it is rarer for actors of color to play themselves. With such scarcity in the industry, video games can further authenticity in choosing the right voices.

A sense of empowerment extends to inside the sound booth, too. “When I go out for roles I was always assuming I was never the lead. Now I don’t look at myself as the ‘support lead’ or ‘kind of lead,’” says Chung. “I have every right to see myself as a lead, as any other person.”