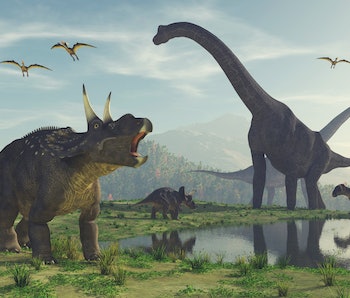 Survival crafting games like Minecraft have given gamers around the world endless virtual wilderness to explore while they’re stuck at home self-isolating. Now, players looking to set off on a new adventure can pick up one of the most unique titles in the genre that’s essentially a hybrid between Jurassic Park and DayZ.

ARK: Survival Evolved is free for PC on the Epic Games Store until June 18 at 11 a.m. Eastern. Anyone with an account (which is also free) will be able to claim and keep a digital copy of the prehistoric journey. Just like the free monthly titles that come with Sony’s PlayStation Plus subscription service, ARK: Survival Evolved will stay in your Epic Games library even after June 18, but only if you redeem it before this week’s offer expires.

This Triassic trek was Studio Wildcard’s debut game and was first released on Steam in August 2017. The PC version of the game continues to attract players numbering in the tens of thousands and lets anyone with a childhood dinosaur obsession — or an adulthood dinosaur obsession — live out their fantasies of riding a T.rex like a horse while toting a machine gun.

Much like other survival titles, players will wake up washed up on the beach of a massive island with nothing more than a loincloth.

They’ll need to begin by finding a source of food and water to sustain their character and begin progressing through the game’s massive technology crafting tree.

At first, players can only bind together sticks and stones to build the basic weapons needed to defend themselves against roaming raptors and the pterodactyls soaring above them. But after several gaming sessions, they’ll begin harvesting metals to craft them into guns, fortifications, and saddles for their tamed dinos.

Ark: Survival Evolved has a fairly lengthy 63-hour single-player campaign that will lead players into several beast-riddled caverns to collect ancient relics and fight monolithic bosses. One of them even includes a fire-breathing dragon that can be tamed and mounted like to make you feel like a Nazgûl from The Lord of the Rings, so there’s something here for fantasy buffs and dino diehards alike.

The game’s sprawling maps can be explored completely alone or with up to 100 players in player-versus-player servers. Any structure or tools you leave in the multiplayer worlds will remain there even after you log out, so this can make other players crucial lifelines or your worst enemies. Teaming up with others can greatly decrease the amount of grinding required to craft endgame tools, but competing players can just as easily loot your things if you don’t hide them well enough.

Ark: Survival Evolved will definitely be a time sink if you’re determined to build every item the game makes available and does require a hefty amount of grinding. But the most resolute players will be able to fly around their stone mansion on the wings of a dragon.

Ark: Survival Evolved is free for PC on the Epci Games Store until June 18 at 11 a.m Eastern.