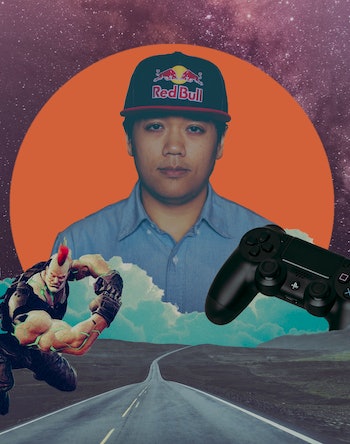 They used to call Hoa Luu things like “The Chosen One” and “Anakin” because of the incredible Tekken skills he put on display at the Challengers arcade at the North Dekalb Mall, five minutes from his house in northeastern Atlanta. They still call him Anakin in the esports scene around Tekken 7. Everybody calls him Anakin. The nickname has stuck.

“I was just a kid who wanted to beat the older guys at the arcade so they could make fun of each other for losing to me,” Luu tells Inverse.

In his first tournament against 15 other teenagers and adults, he placed second. He was 11 years old.

Also read: Why ‘Tekken 7’ is surging in popularity, according to “The Chosen One”

Long before the explosion of esports, where a 16-year-old can take home $3 million from a Fortnite tournament, Hoa’s father, Nhut Luu, encouraged his passion.

“My dad was there at my first tournament, and he was super proud,” says Luu, now 28. “This was during a time when parents were not being very supportive of kids playing games.”

Luu’s father, a real estate agent with somewhat flexible hours, would schlep him from Atlanta to Miami or Houston to compete.

“Even nowadays, he’ll watch tournaments and text me during competition,” Luu says. “Without him, I wouldn’t be doing this at all.”

Thanks to a supportive father at an early age and years of dedication, he’s now one of the top Tekken 7 players in the world with a sponsorship from Red Bull. In November, he came in first place at the DreamHack 2019 tournament in Atlanta, where he still lives. He also credits some of his recent success to progressive strategies that come right out of Red Bull’s High Performance Center, where experts help Red Bull-sponsored athletes train using cutting-edge science and technology.

"If your mind feels right, your body is going to play right."

“There’s this app that focuses on your mental endurance,” Luu says of the app called Soma NPT (Neuro Performance Tech) the experts introduced him to. “It’s like weightlifting for your brain, in that you lift heavier to increase the maximum you can lift. They put a huge strain on your brain so you can withstand more.”

Soma NPT might have required a person to repeat a simple exercise for 10, 15, or even 60 minutes at a time, but it’s gamified so that you’ll keep going to earn a top score. It’s perfect for gamers who need the endurance to manage long bouts of intense competition. This gives Anakin his Jedi-like focus.

“Now more than ever over the last couple years, I’ve realized that if your mind feels right, your body is going to play right,” Luu says.

I met Luu this fall at OS NYC, a new lounge created specifically for playing video games; the sort of luxurious by-the-hour space that can only exist in a big city.

For a couple of millennials who grew up playing games in mall arcades, OS NYC feels like a fever dream of adult gamer ecstasy — especially for Luu since it’s also his first time visiting the city. A cover charge gets you access to massive TVs where you can play popular multiplayer games like Overwatch, Fortnite, or Super Smash Bros. Ultimate with your friends. A bar and kitchen give the arcade a more adult vibe, while streaming booths are on-hand for any “influencers” who might need them.

At the moment, though, OS NYC is vacant aside from a few workers about to put the finishing touches on the grand opening event set for later that night. Luu is practicing Tekken 7 at one of the many TVs when I arrive, but he’s quick to greet me with a smile and handshake.

We spend about an hour talking and playing Tekken 7 on PlayStation 4 (the standard for the Tekken World Tour), using fight sticks that simulate the arcade experience rather than a typical controller.

“I grew up playing in arcades and I love just ‘pressing buttons,’ as they say in the scene,” he says, smacking the buttons on the fight stick. “But when it’s time to play my best Tekken, I’m on the controller.”

Luu absolutely crushed me for dozens and dozens of rounds.

"Just being a zombie all day to the game is not good — sometimes you need to step away.

“I’m doing this full time,” Luu says. “The misconception is that I sit there and play eight hours a day, but if I did that, there’s a chance that I’m hurting my skills by burning out and playing on autopilot. Just being a zombie all day to the game is not good — sometimes you need to step away.”

The stereotype for most esports players is that they play video games for more hours a week than most people spend at their job, sometimes up to 12 hours a day.

Luu estimates he plays Tekken 7 between three and five hours of a day. There are also regular amounts of diet and exercise to stay in shape. In his downtime, he’ll watch UFC matches or play other games like Starcraft and League of Legends. It’s all part of an effort to avoid burnout.

Scheduling for fighting game tournaments can be unpredictable. They’ll usually last all weekend and the timing of individual matches changes as players win or lose. You might not know exactly when you’re playing until a few hours before. Luu explains that everybody has to be ready to go at all times. There’s no room for firm rituals or routines, but there is for superstitions.

“I do take note of the Red Bull hats I wear when I win tournaments,” he says. “I want to know which hats have the best win rate, so I wear those during a big tournament.”

“When it comes to being at the tournament, it’s not about what I eat but rather what I don’t eat,” he says, explaining that he avoids heavier foods and doesn’t eat immediately before competitions. Staying hydrated is a focus, as is avoiding heavier foods altogether — and there’s of course the fact that Luu’s sponsor, Red Bull, “gives you wings.”

“I do drink one can of Red Bull 30 minutes before I have to play,” he says. “I met with a doctor and broke down the science. The caffeine takes 30 minutes to kick in.”

This year has been Luu’s best ever, and he credits his success to investing more into himself than his straightforward endurance at the sticks. Playing smarter, not harder, is his focus.

“A lot of newer people getting into esports don’t realize that sometimes you have to put the sticks down and try to better yourself elsewhere,” he says, adding that it’s important to “step away” from the game when you need a break. One way to still be productive is by rewatching competitions.

Not everyone realizes the amount of studying that goes into being an esports pro. Most competitions are recorded, and esports players review matches just as an NFL coach or boxing trainer might.

"In Tekken, it’s about outplaying your opponent."

“I played a lot of fighting games as a kid before I ultimately stuck to Tekken,” Luu tells me. “I tried Mortal Kombat, Street Fighter, everything — but Tekken was the most crowded machine at my Atlanta arcade. Once I got into it, it just felt right.”

Luu notes a surging popularity for Tekken 7 in the pro scene, thanks to the game being so robust and balanced, meaning each fighter’s strengths and weaknesses create an even playing field. Tier lists that rank each playable character exist, as they do for any other fighting game, but Luu argues that Tekken 7 is so balanced they hardly matter. Last year, somebody even won the world tournament with a panda bear fighter named … Panda.

“In Tekken it’s about outplaying your opponent,” he says.

Luu plays as Jack-7, a hulking android who radiates a neon-green glow. “I like to play Jack-7 as extremely aggressive, but he’s a character that has all the basics,” Luu says. “That allows me to just fight against my opponent mano-a-mano rather than mess around with gimmicks. I can pick him apart piece by piece.” Jack-7 is bigger and more aggressive with longer range, so he’s also a bit slower than the average character. These subtleties affect playstyle and offer enough variety to the character amidst the balanced mechanics.

Tekken 7 is far more than a button-masher. The series, which first launched in 1994 from Japanese developer Namco, has always emphasized memorizing complex button combinations. Unlike other fighting games, it also features a 3D landscape, and players have the ability to sidestep into the background or foreground. Even walking forward requires players to double top and then hold a button.

Individual characters might have 100 different moves, a staggering degree of variety for new players to remember, but pros restrict themselves to a more limited number. In the pro scene, knowing a few moves very well is enough to win. For example, Negan from The Walking Dead has the least number of attacks in the game. “When you play against someone who uses Negan, you pretty much know you’re going to see the same 10 attacks,” Luu says.

"This is not like anything I imagined when I started playing back in the day."

Halfway through our mini marathon of head-to-head competition, I grow frustrated at how many times I’ve been absolutely destroyed. I gain the upper hand in one round by accident and decide now’s the time to drop the tough question for anyone whose career is defined by what was once a passionate hobby.

“Does it still feel like a dream job?” I ask. “Does it ever just feel like work?”

Luu mulls it over a moment and tells me how much he stressed about quitting his full-time job before Tekken 7 was released in 2014, how before that he was balancing school, work, and video games. The group of friends Luu made playing Tekken at Challengers arcade remains close to this day, and one of his friends had hired him to handle medical records and other documents for insurance reviews in an office setting.

Balancing it all wasn’t working, so he took the plunge based on the gut instinct that Tekken 7 was going to be “the one” game that might have a strong enough esports following. Half a decade later, he is one of the best players in the world.

I can’t read his facial expression at this precise moment because I’m furiously button-mashing. Even though he’s paying more attention to me than the game, he’s still fending me off. I feel like Agent Smith at the end of The Matrix, and he’s Neo, blocking all my attacks with a single arm. I’m trying so hard that it’s giving me a headache, but for him it’s effortless.

“There are times where I can’t believe I’m doing this right now, just because of how lucky I am to be in this spot,” he says, turning to look me in the eye. I keep punching. My gamer ego is stronger than professional courtesy in this moment.

“For Tekken to have come such a long way — sponsors are looking at it, and players are getting real opportunities to travel and compete to win money. It’s amazing. This is not like anything I imagined when I started playing back in the day.”

He gives me the courtesy of letting me beat him just this once and laughs at me when I whoop and holler.

Also read: Why ‘Tekken 7’ is surging in popularity, according to “The Chosen One”