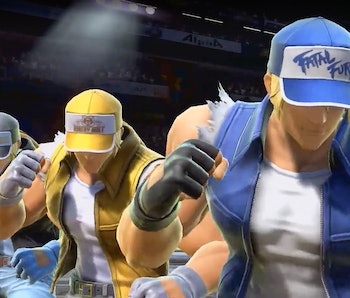 Terry is the protagonist of SNK’s Fatal Fury series, which debuted in 1991 with the release of Fatal Fury: King of Fighters. The breakout title quickly became widely popular in arcades worldwide and inspired ten more Fatal Fury games and 20 King of Fighters titles over more than two decades.

For franchise fans, Terry is on par with Ryu and Ken from Street Fighter. Unsurprisingly Nintendo’s iteration of Terry works a lot like his fighting game counterparts.

Sakurai included all of Terry’s most iconic moves. He’s available now as part of the $24.99 Fighter Pack or can be purchased separately for $5.99 at the Nintendo eShop. Here’s a complete breakdown of the new DLC fighter’s move set.

Terry will automatically face his opponent during one-on-one battles, just like Ryu and Ken. That means players won’t have to tilt their joystick to the side to adjust their positioning if the character they’re fighting jumps or rolls behind them.

He’ll also be able to immediately attack out of a spot dodge. Dodge in place by hitting the shield and down button simultaneously and then immediately hitting the A or B button to pull off a quick uppercut.

Terry will be able to cancel the animation of his normal attacks by quickly inputting a special move. So if you jab and immediately input a B move, the second ability will cancel the ending animation of the jab and come out immediately. This will allow Terry to string together deadly combos if moves are entered in quick succession.

Finally, if Terry’s damage reaches 100 percent or higher, he’ll unlock two deadly special moves indicated by a flashing “Go” sign next to his character portrait. The first is “Power Geyser,” which is done by inputting down, back, forward, and pressing A or B.

The second is “Buster Wolf,” executed by hitting down, forward, down, forward, and pressing A or B. These two moves are extremely deadly but can be blocked and leave you vulnerable to being knocked out.

The following is a list of Terry’s tilts and jabs that can be done by pressing the A button and moving in the corresponding direction. A lot of these will look similar to Ryu and Ken’s kit, but Terry’s moves are slightly slower and pack more of a punch.

Terry’s special attacks are the most complex part of his kit because of the many possible combinations. Depending on how long you press the B button, you can use a weak or strong special. Tapping the button will trigger a quicker variant of each while holding down will activate a stronger but slower version of the move.

A few of Terry’s specials also have command inputs that add even greater variety. Players can tilt their joysticks in a specific combination to pull off a variant of his special abilities, which can be incredibly powerful in certain situations.

Terry Bograd is available now as part of the $24.99 Fighter Pack or can be purchased separately for $5.99 at the Nintendo eShop.

This article was originally published on November 6, 2019