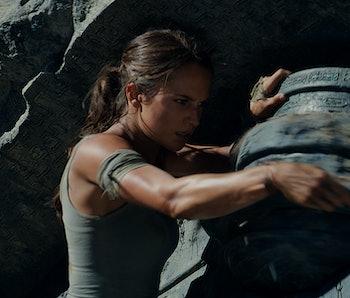 It seems like there’s a new reboot or revival every other day, so it’s not surprising that Tomb Raider franchise came back after the video game its based on got their own reboot in 2013. This time adventurer Lara Croft is a bit younger and less experienced, learning her unique trade by surviving a dangerous new adventure. It’s an update on the original, to be sure, but critics largely think Tomb Raider should have stayed locked away.

Alicia Vikander, rather than Angelina Jolie, stars as Lara Croft in the film which follows her journey to the mysterious island Yamatai while trying to find some answers about her father’s disappearance. After a violent storm capsizes her ship, Lara finds herself stranded on an island full of enemies and secrets. Lara comes out on top by the end of her first adventure, but the critics have spoken, and while many enjoy Vikander, they are far less impressed with the film as a whole.

While The Hollywood Reporter didn’t care for film’s story or action, it did write that “Vikander commands attention and is the element here that makes Tomb Raider sort of watchable.” The only positive aspect of the review was the actress’ performance.

Slim and not tall, she doesn’t cut the figure of a muscled powerhouse, but here she fully embodies physical tenacity and grit, along with absolute determination not to give in or up.

The Los Angeles Times argues a “new-and-somewhat-improved” Lara Croft helps the reboot, especially when you consider how the character traditionally appeared in earlier games and films. The digital avatar was fearless while she searched for treasures in tombs, but her exploitative, sexualized physical appearance was designed for the male gaze. The review states that “since her first video-game appearance in 1996, Lara has always uneasily straddled the line between objectification and empowerment.” But, the new Lara is a bit different:

Tomb Raider has been conceived as both a back-to-basics origin story and a smart, forward-thinking spin on a character with a tricky representational history.

Lara was made for a new audience and with “forward-thinking spin,” but her origin story made for a film full of tiresome and trite set up, according to The Guardian. The story centers on Lara embracing being a Croft by taking over her father’s mission, so flashbacks to her father’s desire to find ancient tomb provide heaps of background information. The problem, according to this review, is how much set up and world-building there is in Tomb Raider:

This new Tomb Raider has been exasperatingly set up as an origin myth, teeing up a possible new franchise, which partly explains the emphasis on the ageing and tiresome Lord Richard.

Part of that set-up includes getting to know Lara before she sets off on the adventure, which Wired UK argues helps elevate the film when compared to other video game adaptations. In the 2013 game, Croft comes across as unsympathetic because she kills many people without remorse, but Wired argues that the movie fixes this somewhat.

It is Lara’s character, however, that elevates the film and makes Tomb Raider stand out among other game-to-film adaptations. Thanks to one key difference, Vikander’s Lara becomes much more relatable than her video game counterpart, even for what is at base an action-adventure romp.

Vanity Fair writes that the Director Roar Uthaug’s take is “aggressively boring,” and the film messes up an easy action-adventure formula with Lara’s mission to find her father. The writer also takes exception with the lack of actual tombs being raided during the film:

I checked my watch: the first tomb doesn’t get raided until 76 minutes into the movie’s 116-minute run time. Seventy-six minutes!

According to Entertainment Weekly, the film improves on the original film series, which is important for a reboot. Adding something to the franchise and given people a reason to buy tickets for the new film, which this review believes Tomb Raider does:

More like this
Gaming
20 hours ago
You Need to Play 2022’s Most Underrated Marvel Game ASAP
By Joseph Yaden
Gaming
18 hours ago
These Fire Emblem Engage Characters Are the Best Fit For the Windsweep Ability
By Hayes Madsen
Gaming
17 hours ago
Xbox Game Pass Confirms 6 More New Games Coming in February 2023
By Willa Rowe
LEARN SOMETHING NEW EVERY DAY.
Related Tags
Share: