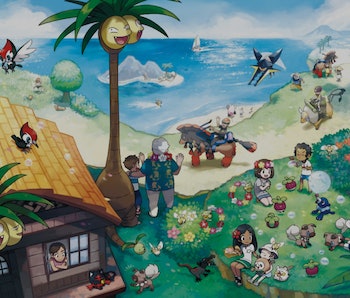 This article about the release of Pokémon Sun and Moon was originally published on November 22, 2016 and updated on April 2, 2022 after the game was released. Read on for the original article, with some new changes to reflect the latest updates on this topic.

Pokémon Sun and Moon are here at last, and while the game presents a nice mix of both familiar faces and totally new monsters to collect, you might need some guidance figuring out which Pokémon are worth all of those hard hours of training. There’s a great selection of powerful Pokémon to add to your party right off the bat. Let’s look at some of the best Pokémon you can add to your party at the beginning of the game.

Since the dawn of Poké-time, Bug-type Pokémon have gotten a bad rap for being one of the worst typings in the game, but there are actually quite a few Bug-types, especially hybrids, that have shown just what this type can do. In Sun and Moon, we now have Grubbin, which evolves into Charjabug, an Electric/Bug-type at level 20, and eventually into Vikavolt.

Grubbin evolves into a Pokémon with a high dose of Special Attack, making it a solid choice if you need to add an Electric-type to your team. You can catch one in the first hour or so of the game on Route 1, the route to the right of your house as you head to Iki Town. Grubbin also likes to hang out along Routes 4, 5, and 6.

Pikipek is one of the first Pokémon you can catch in the game and is a great all-around Normal-Flying addition to your team early on. Pikipek can dole out some serious damage in the early game, evolving into Trumbeak and Toucannon later down the road. You can catch one on Routes 4, 5, and 6.

Announced at the Pokémon World Championships this year, Crabrawler looks to be a Fighting-type that’s a serious contender for both early and end game. He’s a good option if you want something that can stand up against Dark-type moves. Plus, with its high Physical Attack stat, this oddball packs quite a punch, especially once you level it up in Mount Lanakila to evolve it into Crabominable, and it picks up Ice as a type as well.

You can find Crabrawlers roaming around Route 2, just north of Hau’oli City.

Salandit is the first Fire/Poison-type in any Pokémon game, and you can catch one for yourself once you make your way to Akala Island and the Wela Volcano Park or Route 8. Its Corrosion ability allows it to poison Steel and Poison-type Pokémon, the two types that were initially immune to such attacks. Salandit also boasts an incredibly high Speed stat and a lofty Special Attack as well, making this fire-lizard an excellent offensive addition to your party.

Only female Salandits evolve, and they evolve into Salazzle at level 33, so if you want to evolve your Salandit, plan accordingly.

This cutesy Normal/Fighting bear Pokémon has a pretty low encounter rate early in the game, but catching a Stufful the first chance you get is well worth the effort. You can find Stufful on Route 8 on Akala Island, but the chance of you running into one hovers somewhere around 8%, so buckle in and prepare to be searching for a while.

Stufful evolves into Bewear at level 27, effectively turning your teddy bear into an intimidating, heavy-hitting beast that also serves well in a defensive role. It’s so powerful, in fact, that even a friendly bear hug from this beast could split you in two.

Mudbray is a playful little Ground-type donkey you can catch on Akala Island just outside of the first city on Route 4. It’s a good Ground option, especially once Mudbray evolves into Mudsdale at level 30.

Mudbray and Mudsdale have high Physical Attack and Defense, making them a great counter to any speedier, squishier Pokémon you might have on your team. Plus, Mudsdale is just so darn majestic!

Okay, okay. There’s nothing new about Pikachu, but recent changes have made Pikachu and Raichu viable options in both campaign and multiplayer battles. Now we’re getting Alolan Raichu, an Electric/Psychic-type hybrid.

Alolan Raichu will be able to do some serious damage when paired with Tapu Koko in competitive double battles. Expect to see Alolan Raichu appear in teams at the 2017 Pokémon Video Game Championships. In the more casual sphere, though, Pikachu and eventually Alolan Raichu are still great Pokémon to add to your team. Alolan Raichu has a fairly high Special Attack and is incredibly fast, which is quite something considering the fairly low speed of most of the other new Pokémon in Sun and Moon. You can catch Pikachu in the grass patches inside Hau’oli City.

These are a few of the strongest Pokémon you can find in the first few hours of Sun and Moon. While you may find yourself switching out some of them as you gain access to other Pokémon on your adventures, these monsters will help you conquer the first few island trials as you start to form your team.

Pokémon Sun and Moon are currently available on Nintendo 3DS.

This article was originally published on November 22, 2016