“I built this thing too tricky.” 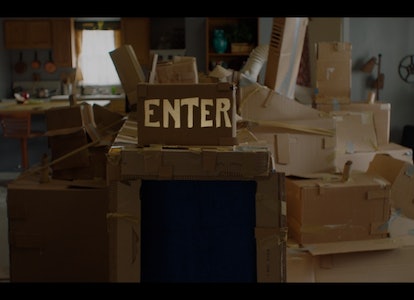 Remember building forts in the living room? Dave (Nick Thune) certainly does. Approaching 30 and still directionless, Dave takes on various projects that he never finishes, fueling his arrested development by never having to commit to a purpose or goal.

While his girlfriend Annie (Meera Rohit Kumbhani) is away for the weekend on a business trip, Dave takes all the old boxes in their apartment and builds a maze in the living room, achieving the lifelong dream of many 7-year-olds. Annie comes home and bursts Dave’s bubble, like a scolding mom, although really she’s just behaving like a semi-responsible adult. She finds the cardboard contraption filling the front room of their small apartment, with Dave somewhere inside, calling out to her and begging her not to dismantle it. Dave says he’s lost inside what looks to be a handful of boxes taped together.

“It’s much bigger on the inside,” he wails. “You can’t just make me tear it down because it works.”

The thing about Dave’s maze is that it actually does work, and director/co-writer Bill Watterson’s Dave Made a Maze is more about the wonders contained within Dave’s fantastical creation than it is about the early midlife crisis that inspired it.

As Annie, Meera Rohit Kumbhani brings some emotional depth to her character’s frustration, but once the movie enters the maze alongside Dave, the focus shifts to admiring the filmmakers’ handiwork the same way that the characters are admiring Dave’s.

It’s some pretty amazing handiwork, and the visual style alone makes Dave Made a Maze worth seeking out on various free streaming services. Low-budget productions are sometimes derided for sets that look like they were made out of cardboard, but Watterson and his team (including production designers Trisha Gum and John Sumner and art director Jeff White) turn that from a liability into an asset. The sets in Dave Made a Maze are made out of cardboard, and they are astonishing.

From the outside, Dave’s maze doesn’t look like much, and the movie remains a low-key relationship comedy for a little while, as Annie calls Dave’s buddy Gordon (Adam Busch) to help her convince Dave to come out of the maze, and soon their apartment is full of friends and hangers-on.

Everyone finds it funny that Dave, a grown man, won’t come out of his cardboard maze (which, as Gordon insists, is actually a labyrinth), and no one takes Dave seriously when he warns them not to come in after him, because it would be dangerous. Deadpan filmmaker Harry (James Urbaniak) arrives with his own two-man camera crew and immediately starts making a documentary about this absurd situation.

Harry soon has plenty to document, as nearly everyone in the apartment follows Annie into the maze to “rescue” Dave. Once they get inside, they discover that Dave has not been lying about the dangers; if anything, he’s been downplaying them. The maze is indeed bigger on the inside, with seemingly endless passageways and detours. It’s tall enough and roomy enough for everyone to stand up fully and to get lost just as easily as Dave has. “I built this thing too tricky,” he says with a mixture of pride and dismay.

At first, the maze’s tricks are benign. An oversized boxing glove on a spring punches Gordon in the crotch when someone pushes a button labeled “Don’t push.” A giant totem-like head opens and closes its mouth as torn paper spews forth. Harry trains his camera on Annie to get her response. “More childlike wonder,” he directs her.

The childlike wonder doesn’t last long. Soon the intricate construction of the maze starts turning on people, in dazzlingly violent ways. Heads are lopped off and guts are spilled, although the blood and viscera take the form of yarn or silly string. Through it all, Harry continues to film, with Urbaniak’s dry humor coming across in a character who’s sort of a nerdier Werner Herzog. Even as the movie gets darker and more violent, it remains consistently funny.

There’s not much more to the plot than the characters moving from one impeccably constructed set piece to another, including a scene in which they travel down a tube and briefly turn into paper-bag puppets, and another with the most effective use of forced perspective since the Lord of the Rings trilogy.

Eventually, Dave comes up with a plan to escape from the maze, which connects thematically back to his lack of follow-through in life. The subdued relationship story between Dave and Annie comes to a suitably melancholy conclusion, but it’s not entirely clear if anyone’s learned anything.

“It’s a passion project,” Dave says of the death trap responsible for mortally wounding several of his ostensible friends. The same is true of Watterson’s film, which is much less deadly and much more enjoyable.

Dave Made a Maze is streaming for free on Crackle, Peacock, Plex, Popcornflix, Tubi, Vudu, Hoopla, and Kanopy in the U.S.