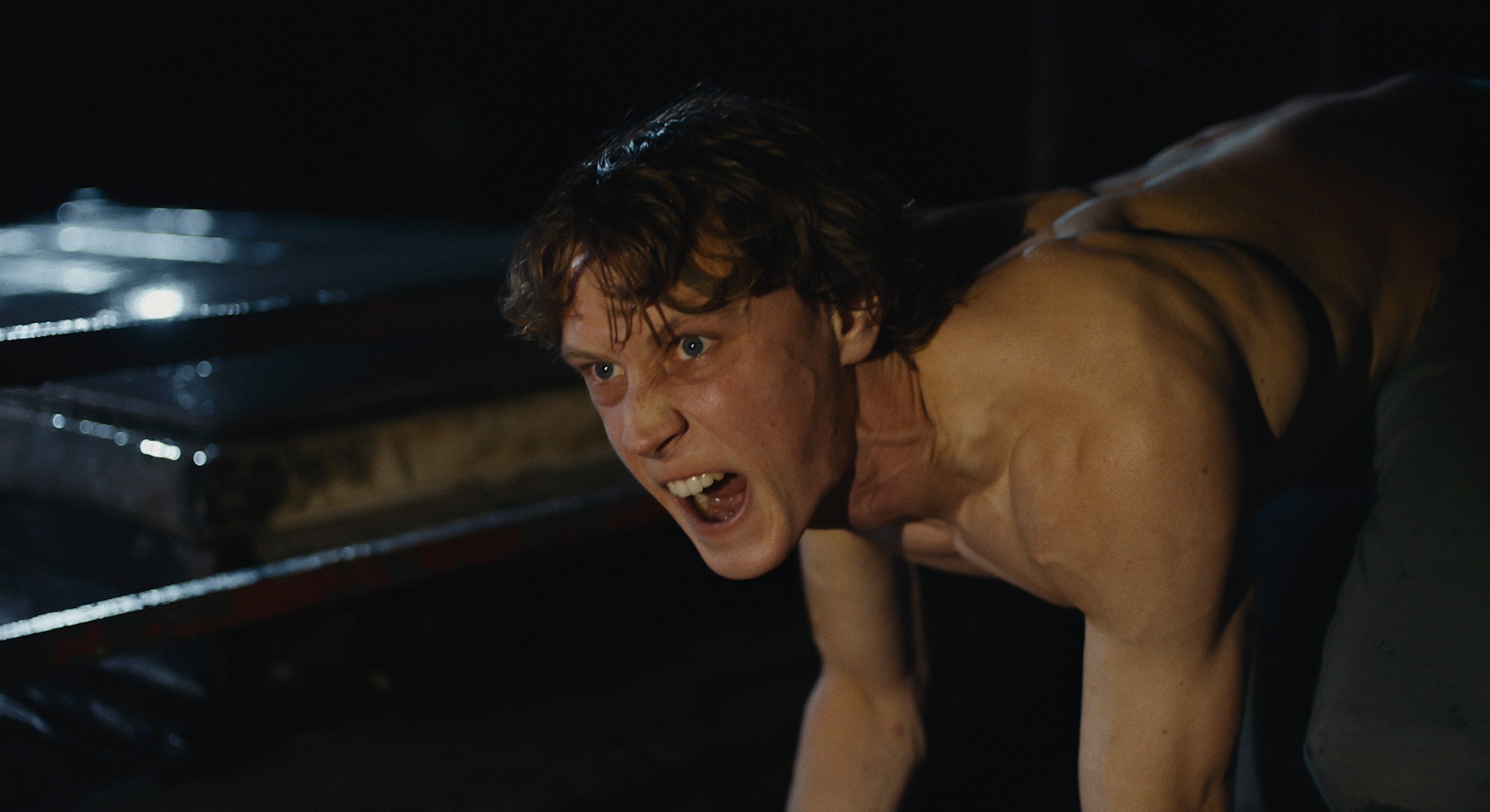 It’s a Sunday afternoon, and the acclaimed British actor (1917, Captain Fantastic) is hunched over in his seat, modeling the stance of a wolf crouched down to lap water from a stream — or at least giving it his best effort. Elbows back, wrists curled, fingers bent, back arched, head lowered, and shoulders raised, MacKay has slipped into this painful-looking position with a grace that’s both astonishing and slightly alarming.

Of course, he’s been practicing; such are the peculiarities of promoting director Nathalie Biancheri’s riveting new indie drama Wolf, about patients at a “species dysphoria” clinic who endure grueling therapies meant to convince them they’re not animals.

But as MacKay demonstrates, his lead performance as Jacob — a patient who believes he’s a wolf trapped in a man’s body — could ultimately only go as far as his body would sustain it.

“Literally, [it’s] your bones; your knees go like this, and your joints are in the other direction,” says the actor, gesturing frustratedly with his arms. “Our knees do that, and wolves’ back legs do that, so you can’t do [this motion] with the same ease.”

Walking around on his knuckles and toes, flaring his nostrils, and writhing around in primal agony, MacKay brings a visceral physicality to Wolf. He labored for months to emulate lupine movements while uncovering the headspace of someone whose external and internal realities couldn’t be less aligned. Despite the thrilling commitment with which MacKay plays the role, certain traits were impossible for him to replicate. That suited the character perfectly.

“Every day, in his gut, he knows that he's a wolf,” explains MacKay. “But also, every day, he's faced with the cold, hard facts: that he doesn't have a tail, he doesn't have paws, his nose is a human nose, and he has skin, not fur. He's met by two facts: there is a fact that is his gut, and there is a fact that is his reality. And which one is the bigger reality? That, I think, is impossible. It's kind of unanswerable.”

For MacKay, the most challenging part of playing a wolf was accepting the physical limitations — he calls them “shortcomings” — of being human.

“Coming up against those impossibilities, and particularly [some motions] — putting all your weight forward, having your head closer to the ground — was the hardest thing, because it's so much weight at the front of your body,” he recalls.

Never mind that the actor’s knuckles had blistered “like mad” by the end of filming, or that Jacob is eventually caged, muzzled, and attacked with a cattle prod by the clinic’s sadistic director (Paddy Considine). No, MacKay struggled most with the idea he couldn’t push his performance, the most intensely physical of his still-rising career, even further.

“Is it what you feel most truthfully?”

Speaking over Zoom, MacKay radiates quiet confidence through the screen. Now 29, he’s gradually emerged as one of the most skilled actors of his generation, distinguished by his unusually thoughtful approach to selecting roles and an all-in preparation style.

If there’s a through-line in his career, MacKay says it’s that he’s fascinated by the complexities of what makes a person who they are.

“Is it what you feel most truthfully? Do you build that off what other people think or say, and does that move and change with the context that you're in, and the experiences that you have as you grow?”

MacKay doesn’t have an answer, but he picks projects that ask the question.

Before playing Australian bushranger Ned Kelly in Justin Kurzel’s True History of the Kelly Gang, MacKay measured every meal for months to physically transform into the skeletally thin outlaw. He remained in character throughout filming by writing poetry and even forming a punk band with his costars to further penetrate Kelly’s rebellious headspace.

“Everything you can learn about a wolf is still a human’s interpretation of one.”

To prepare for Wolf, which shot in Ireland in August 2020, MacKay spent much of lockdown crawling around on all fours in his apartment, waking up early to practice Jacob’s movements in a nearby park. He usually managed to fit in an hour of practice a day before local dog walkers started passing through; unfortunately, practicing Jacob’s howl made it even harder for him to avoid unwanted attention.

MacKay also read books and watched nature documentaries, though he didn’t take their commentary as gospel. “Everything you can learn about a wolf is still a human’s interpretation of one, whether it's for pop culture or scientific research,” he says. “I found some of those wolf documentaries really interesting. Some of them, I was going, ‘I don't think the wolf’s thinking that!’ You know, as the voiceovers go, ‘They look and they can clearly feel the disruption in the pack.’ I was like, ‘I think he's just tired.’”

Alongside the film’s writer-director, Nathalie Biancheri (Nocturnal), MacKay approached Jacob first as a wolf, investing in the character’s self-perception, then working backward to find the boy sharing space in his psyche.

“George is so dedicated; he was studying the anatomy of wolves and actually building himself more to be like one,” Biancheri recalls. Though the filmmaker worked closely with MacKay to create Jacob, she couldn’t offer him easy answers, especially in terms of understanding the character’s psychology. “Jacob was always the character I felt I knew the least, despite him being the lead,” she says over Zoom.

This was partially by design. “I think you have to make films to answer questions for yourself or to question questions in yourself,” adds Biancheri. “Wolf was that for me; it definitely was never a film in which I thought ‘this is this’ or ‘that is that.’”

“Accept the unknowability of humans.”

“The piece I had seen was quite sensationalistic and slightly ironic, and I thought, ‘Why would they take that angle? This is actually very, very interesting,’” Biancheri says. “What interested me was the theme of dual identity: whether you really feel that you are an animal trapped in a human's body, or whether you really want to be an animal despite being a human, which is slightly different.”

Compelled by the concept, Biancheri wanted to question whether more objective truths had a place within such a tricky psychological puzzle. “I am a big believer in psychoanalysis, but what I’ve learned having done it myself for many years is to accept the unknowability of humans,” she says. “Ultimately, all the therapy that you need is actually to accept that you'll never know. You can't be prescriptive, and there’s no answer.”

Wolf took shape as a fiction feature when Biancheri hit upon the idea of setting it at “the zoo,” a special clinic meant to treat young people with species dysphoria. One patient (Fionn O’Shea) believes himself a German Shepherd. Another young woman (Lily-Rose Depp) identifies deeply with wildcats, eventually forming a forbidden bond with MacKay’s Jacob.

“With Lily, it was a very different process, because it was about thinking of it as a girl who’d put on an animal to survive,” says Biancheri. “A lot of her work was figuring out if you can be an animal in your movements and human in your eyes. Where are those contrasts, and where do you retain humanity if you’re trying to be completely animal?”

“I'm gonna fucking rip someone's head off if you push me any further.”

Among other patients Jacob represses his true animal side, remaining silent despite his excruciating mental pain. Alone, he collapses into half-choked yelps and growls, unable to hold in his true self. Often, he fantasizes about running free in the wilderness, far from the confines of the clinic.

“When you read into the silences, they’re so much about him holding on to himself, or boiling in a feeling or as a reaction,” MacKay says. “Either it's a thing of, ‘I'm going to hold on, because I'm gonna fucking rip someone's head off if you push me any further,’ or it's that thing of, ‘If you make me say this out loud, I'm going to cry.’”

To help all the actors play their respective animals, the production called in a specialist: movement coordinator Terry Notary, previously a world-class gymnast and Cirque du Soleil performer, who came to Biancheri’s attention through his performance as a man acting like an ape in 2017’s The Square. Notary also co-starred via motion-capture in all three of Matt Reeves’ Planet of the Apes films and, in perhaps his most sizable role, he played the titular giant ape in Kong: Skull Island.

Bringing Notary to set was about “finding gestures of animality,” says Biancheri. How would you raise a hand as an animal? With what kind of inflection would you hold your limbs? And how could you let go of the cerebral?

Notary spent four weeks working with MacKay. Though he frequently got the actor on all fours, their exercises were more about meditation than muscle-building.

“Terry gets you to a place where you are void of thought,” recalls MacKay. He lights up while discussing this experience, which taught him to set aside his inhibitions and move purely on instinct.

In one exercise, Notary had MacKay crawl around a table and open a door without thinking. Often, he simply asked him to linger in the moment, inhabiting Jacob’s wolf side and noting emotions as they passed through his mind. In order to capture Jacob’s nature, MacKay had to free his mind from any preconceived notions of what it would feel like to move through the world as a wolf. Often, that simply meant letting go.

“The power of being without thought; that, in of itself, was just as wild as howling naked,” says MacKay. “Not thinking as much feels just as primal, and as powerful, as being without your clothes and baring your teeth.”

Wolf is now in select theaters.