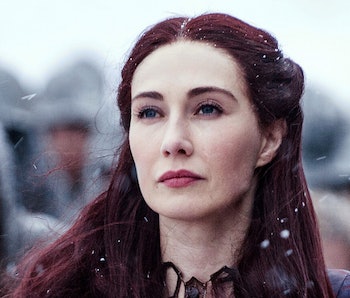 A Song of Ice and Fire is brimming with mysterious characters, though few are quite as enigmatic or influential as Melisandre.

The red priestess plays a major role in HBO’s Game of Thrones, resurrecting one of its lead characters and serving as an advisor for several of the show’s major figures across its eight seasons.

However, as was the case with most of the show’s characters, Game of Thrones never explored Melisandre’s origins or backstory as much as the fans of George R. R. Martin’s original Song of Ice and Fire books hoped it might.

One popular fan theory even speculates that The Winds of Winter, Martin’s long-awaited sixth installment in the Song of Ice and Fire series, will reveal a shocking detail about Melisandre’s ancestry that Game of Thrones never included.

The Theory — Song of Ice and Fire fans believe that Melisandre is secretly the daughter of two notable figures in the books: Shiera Seastar and Brynden Rivers (better known as Bloodraven). The former character, one of the bastard daughters of King Aegon IV Targaryen, was considered one of the most beautiful women in the history of the Seven Kingdoms. She was also said to have been proficient in the dark arts.

Brynden Rivers, meanwhile, was Shiera’s half-brother and one of her known lovers. He served as the Hand of the King to two different Targaryen kings and eventually went on to become the Lord Commander of the Night’s Watch.

He also just so happens to be the Three-Eyed Raven.

Melisandre’s Secret Past — This might seem like a crazy idea at first, but there’s some legitimate evidence behind this theory.

For starters, Melisandre has major physical similarities to the Three-Eyed Raven — namely, they both have pale skin and red eyes. Additionally, not only was Shiera known for her beauty (as is Melisandre), but some people in the Seven Kingdoms even believed that she bathed in blood to maintain her looks. There were rumors that Shiera’s mother was far older than she appeared, maintaining the appearance of youth through dark magic. Given what we know about Melisandre, it’s hard not to imagine some connection between the three women.

In A Dance with Dragons, Melisandre, notably, has a vision of two people who many believe to be Bran Stark and the Three-Eyed Raven. Melisandre also notes that the Three-Eyed Raven sees her when he appears in her vision. Shortly after that, she experiences a flashback to her childhood. Did the sight of her father’s face, even though she doesn’t recognize it, cause her to subconsciously look back into her own past? It’s impossible to know for sure, but it certainly seems like a legitimate possibility.

Melisandre having red eyes also opens the door for her unknowingly being a greenseer, just like the Three-Eyed Raven. If so, this explains why Melisandre’s visions are so unique and powerful.

It’s also worth noting that Jon’s direwolf, Ghost, immediately takes to Melisandre in the books, despite her being a stranger. The only other time we’ve seen one of the Stark children’s direwolves behave in this manner was when Jojen Reed — gifted with greensight — first met Bran’s direwolf, Summer.

The Inverse Analysis — Until The Winds of Winter is actually released, there’s no telling whether or not this theory is true.

That said, it’s an undeniably exciting possibility, one that would help clear away some of the mystery surrounding one of the series’ most fascinating and mystifying characters. It would also, technically, make Melisandre a secret Targaryen — just in case her relationship with Jon Snow needed another interesting layer.