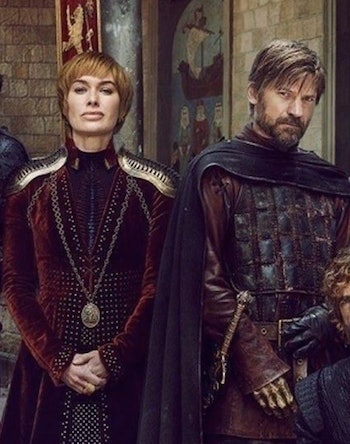 George R.R. Martin has been writing The Winds of Winter for nearly a decade now.

However, Martin says his writing efforts over the last several months have been especially fruitful (probably because he’s in a secluded cabin) and there is finally hope that the sixth book in his A Song of Ice and Fire will be finished soon. The Winds of Winter is tentatively due to be completed at some point next year, though it may be for the best to keep expectations low —the book has been delayed a few times before.

Fans can take comfort in the fact that Martin has been providing consistent morsels of information about which characters he’s been writing about the most. The author’s last update indicated that he was picking up his writing pace while spending a lot of time with the Lannisters, Oldtown, and Dorne. In August, he hinted that his days were being spent with “Vic,” among a few others in Westeros. We know Victarion Greyjoy, the younger brother of Balon and Euron, the latter of whom he hates with a passion.

Unlike Balon and Euron, Victarion was left out of Game of Thrones completely. Only his steel axe appeared on the HBO series, wielded by the pirate-like Euron. While it makes sense that not every character was included on the show (there were so very many of them), Victarion is a minor point of view character in the books, which makes him more important to the narrative than either of his brothers. Knowing that Martin is writing from the character’s perspective, it’s possible that Victarion is being set up to become Azor Ahai, the most crucial prophetic role in Westerosi history.

The prophecy of Azor Ahai states that a legendary hero will be reborn, sent by the god R’hllor, to defeat a cold, dark evil. Azor Ahai will also wield a flaming steel sword called Lightbringer, forged in holy fire and the blood of the original hero’s wife Nissa Nissa. Per Melisandre, the hero shall be born amongst smoke and salt, waking dragons and a new world along with it.

Azor Ahai’s identity has been debated and theorized about by fans for years. When Game of Thrones was still airing, fans also assumed that the answer to Azor Ahai would finally be revealed, but the series was far more focused on the prophecy of The Prince That Was Promised, a leader foretold to save Westeros from the growing darkness believed to be the Others (aka, the White Walkers). The two are similar and the red witch Melisandre has used the terms interchangeably at certain points in the books. However, there are several distinct differences between them that keep them separate.

“There will come a day after a long summer when the stars bleed and the cold breath of darkness falls heavy on the world. In this dread hour a warrior shall draw from the fire a burning sword. And that sword shall be Lightbringer, the Red Sword of Heroes, and he who clasps it shall be Azor Ahai come again, and the darkness shall flee before him. Azor Ahai, beloved of R'hllor! The Warrior of Light, the Son of Fire! Come forth, your sword awaits you! Come forth and take it into your hand!”

The usual suspects have always been Jon Snow, Daenerys Targaryen, Stannis Baratheon, and Aegon Targaryen (who many believe is actually Jon). The four candidates have many similarities — they are very loyal to their causes, they can be fair, their journeys encourage faithful followers, and they can each lead an army against the Others.

Meanwhile, Victarion is brute in nature, endlessly loyal to House Greyjoy, and is a severely religious man — worshipping both R’hllor and the Drowned God of the ironborn — who takes comfort in the gods’ protection of him. To that end, he chooses to wear heavy armor at sea despite the fact that he’d sink to the bottom. He’s also not the brightest bulb in the pack and is violent towards women, beating his third wife to death after she slept with his brother Euron. With the exception of killing his wife, Victarion doesn’t seem to bear many similarities to Azor Ahai. Victarion doesn’t even carry a sword.

Hailing from the Iron Isles, however, one could argue that he was born amongst the smoke (or in this case heavy fog) and sea as the prophecy proclaims. Plus, Victarion is aided by Moqorro, a red priest of R’hllor who sees visions and advises him accordingly. Moqorro even burned Victarion’s arm to induct him into the religion of the Red God. Victarion doesn’t have many great ambitions of his own, but he’s willing to follow wherever he feels fated to go.

While Victarion doesn’t boast the usual qualities of a hero, the prophecy of Azor Ahai doesn’t have to be taken literally. Most prophecies end up being altered over time, adjusting to regional and language changes, evolving and being left open to interpretation. What’s more, the idea of a legendary savior isn’t always a peaceful one (Azor Ahai certainly wasn’t). Considering that no one sees Victarion that way may be exactly what brings him to the forefront as Azor Ahai. After all, he’s fierce, cruel, obedient, and unflinchingly loyal and his leading the charge would subvert fans’ expectations of who this reborn hero should be.

Victarion was last seen heading toward Mereen, having lost and gained several ships throughout his voyage. His plans seemingly entailed marrying Daenerys and seizing control of her dragons by way of his dragon horn, lending credence to the idea that he could be Azor Ahai. We know Martin has spent time writing about Victarion's journey in The Winds of Winter and it's possible that his point of view will begin to offer more clues to his ascendancy.

While it’s doubtful that Daenerys will marry Victarion willingly, he could aid in the siege of Mereen to gain her trust. To take on Westeros, Daenerys has been growing her fleet and Victarion might strike a deal with her, offering the strength of his Iron Fleet in exchange for her dragons. She’ll never agree to this, but Victarion will likely take them by force.

Of course, there’s a chance that Azor Ahai has been personified. There are several fan theories that claim Azor Ahai is nothing but the story of A Song of Ice and Fire, brought to life through Martin. However, Victarion genuinely believes himself a holy man and is the only one of the prophecy’s candidates who has murdered a loved one willingly (and is capable of doing so again).

Stannis is a reluctant follower of Melisandre, Jon Snow is dead, and Dany is too busy trying to reclaim her rightful spot on the Iron Throne to worry about the prophecy. That leaves Victarion, who has already evaded death and is unrelenting in his will to please the gods. His rise as Azor Ahai would be unexpected and bizarrely fitting of the storyline, which rarely unfolds as predicted.