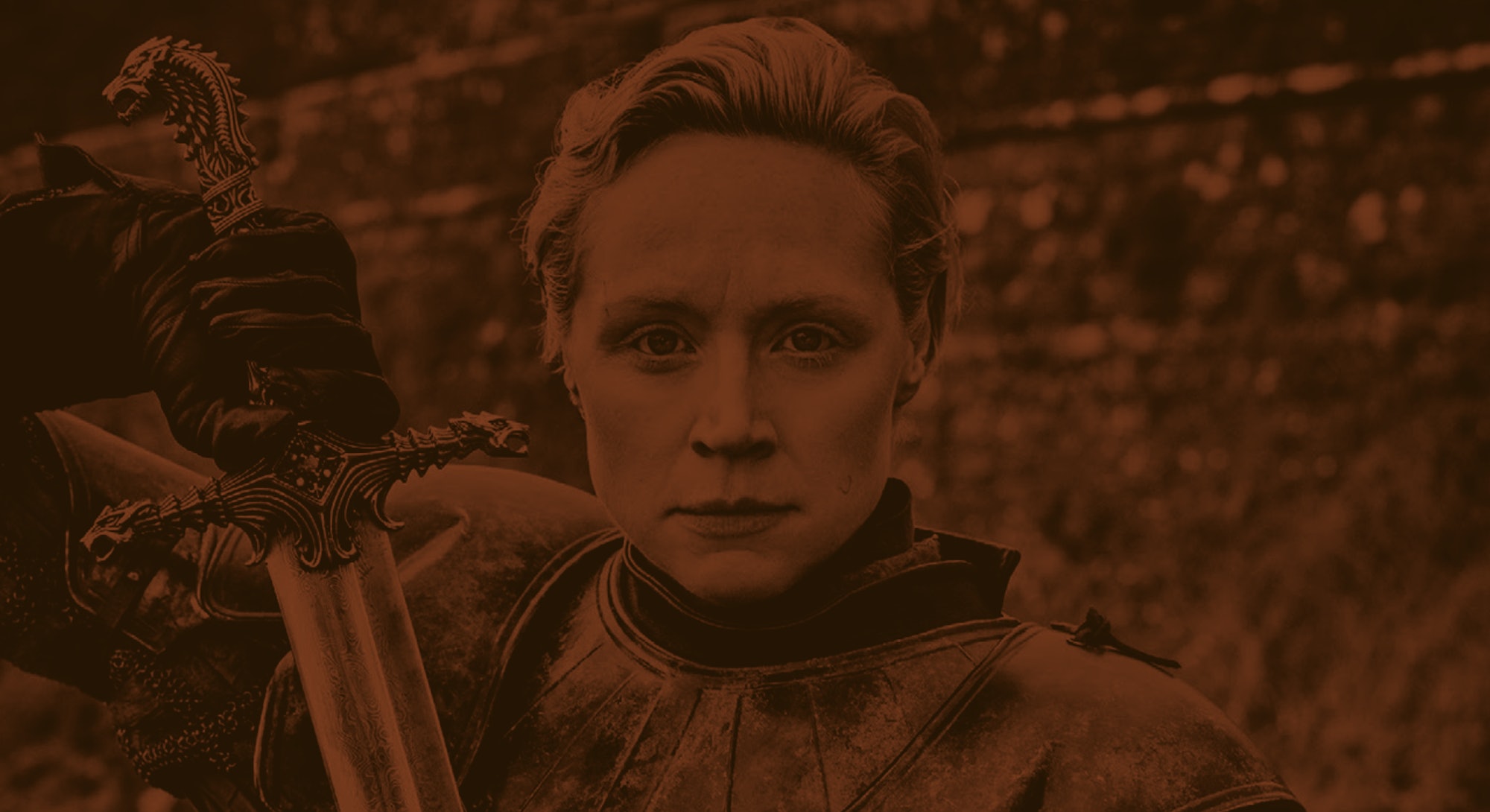 Brienne of Tarth has always stood out in Westeros.

Brienne defied the narrow gender norms and expectations of the Seven Kingdoms, breaking boundaries and ignoring or rejecting anyone who stood in her way. That’s part of what made her such a beloved character among fans of both Game of Thrones and the "A Song of Ice and Fire" books that inspired HBO's show. Her bravery, dedication, and strength have put many knights to shame. She even brought out the human side of Jaime Lannister, showing that even an incestuous kingslayer can have a tender side.

Despite her importance in the story, Brienne’s heritage hasn’t been explored much in the show or books. But a popular fan theory, which George R.R. Martin has confirmed in interviews, says there’s a bigger story to be told about her lineage than we’ve seen onscreen. Brienne is descended from another hero who defied the norms of his own time.

It’s the ultimate Easter Egg for true fans: Brienne of Tarth is descended from Ser Duncan the Tall, one of the heroes of Martin’s “Dunk and Egg” short stories.

One of the tallest warriors in Westeros

There’s a couple reasons Brienne of Tarth was able to become such a talented warrior, even in the stratified world of the Seven Kingdoms. It’s partly through sheer determination and strength of will, but part of it is physical too. The lords and knights of King’s Landing mock her for it, but Brienne is exceptionally tall and strong, very different from the other women of the court of King’s Landing. In an email he wrote to a fan in 2001 – yes, 2001 – Martin confirmed her unusual physical characteristics:

Brienne is well over six feet tall, but not close to seven, no. Certainly not above it. Just off the top of my head, I would say Brienne is taller than Renly and Jaime and significantly heavier than either, but nowhere near the size of Gregor Clegane, who is the true giant in the series. Shorter than Hodor and the Greatjon, maybe a bit shorter than the Hound, maybe roughly the same height as Robert.

Brienne is at the very highest end of the height range in Westeros, male or female, which is why she’s able to go toe-to-toe with some of the greatest knights of the realm. The rest of Brienne’s living family doesn’t feature prominently in the books, so it’s hard to say whether other members of her family share the same traits.

What’s clear is that her family does not support her decision to pursue life as a warrior. She’s the only living child of Selwyn Tarth, lord of the island of Tarth. Her siblings all died young, and Selwyn repeatedly tried to marry her off to eligible lords and lordlings of the stormlands. She refused to have any part in it – even dueling one of her suitors, promising to marry him if he could best her in combat. (He couldn’t.)

The tale of Ser Duncan the Tall

Enough about Brienne. Long before her time, there was a knight named Ser Duncan the Tall. Also known as “Dunk,” he’s one of the two leads in Martin’s “Dunk and Egg” stories, which are set almost a century before A Song of Ice and Fire, during the last century of Targaryen rule. Duncan is originally a simple hedge knight, an orphan born in Flea Bottom who squired for a petty knight and became one himself. Hedge knights, wandering warriors sworn to no house or lord, are the lowest of the low in Westerosi chivalry. Some are good fighters, but many are little more than bandits or beggars.

Duncan, on the other hand, was an honorable man. He was also a very large man, almost seven feet tall and “thick as a castle wall.” Like Brienne, he had a strong sense of justice, of doing what’s right regardless of the consequences. He first made a name for himself by attacking a Targaryen prince to stop him from harming an innocent lowborn woman.

Without spoiling too much from the “Dunk and Egg” stories, Duncan eventually won renown as one of the strongest, most loyal knights of the Seven Kingdoms… and he played a key role in helping the last great Targaryen king become a good man who understood and cared about the common people. As Lord Commander of the Kingsguard, Duncan died alongside that king, Aegon V, in the Tragedy of Summerhall.

As a member of the Kingsguard, Duncan never married. His personal crest was an elm tree beneath a green shooting star.

Clues in the armory

So what does that have to do with Brienne? It started as a fan theory, back when A Storm of Swords first came out two decades ago. After all, Brienne was tall. Duncan was tall. Both were brave and honorable. Both very quickly became fan favorites. Seems like an open-and-shut case that they’re related, right?

It may have seemed like a stretch at the time, but GRRM added fuel to the fire when he confirmed that a descendant of Dunk had appeared in the books. He repeatedly brought up the subject in interviews. After the release of A Feast for Crows, he teased that he had left a big hint about Duncan’s descendant in the new book. Of course, this sent fans off on an eager Easter Egg hunt. Eventually they found it, in Brienne’s second chapter in Feast:

“You did beautifully,” [Brienne] said, when the woman showed her the freshly painted shield. It was more a picture than a proper coat of arms, and the sight of it took her back through the long years, to the cool dark of her father’s armory. She remembered how she’d run her fingertips across the cracked and fading paint, over the green leaves of the tree, and along the path of the falling star.

That’s the clue: Brienne used to train with a shield that bore the crest of Ser Duncan the Tall. Shields and crests are very personal in Westeros, and even members of Great Houses usually have their own personal crest. This is no mere coincidence.

That was the state of things for more than ten years. Brienne’s descent from Duncan became another fun fan theory, like so many others: one with a little bit of support, but not enough to be certain. Then Martin spilled the beans. During a signing in 2016, a fan directly asked him whether we’d ever find out how Brienne descended from Dunk. Martin confirmed that we eventually would, thus confirming Brienne’s descent.

The mystery now is not whether Brienne is descended from a former Lord Commander of the Kingsguard, but how it came to be. When did Duncan visit Tarth? Who did he fall in love (or simply have a good time) with? It could be Tanselle Too-Tall, the Dornish puppeteer about whom Duncan said, “Tanselle Too-Tall was her name, but she was not too tall for me.” But how did they end up on Tarth? And who is Brienne’s mother?

These questions and many others will hopefully be revealed when The Winds of Winter release date finally arrives. Until then, it’s just a fun connection to the popular short stories, and the rare fan theory that actually has a definite answer. While Brienne is very proudly her own woman who will convince Westeros of her worth by sheer force of will, that strength runs in her blood. After all, in Westeros, being a fan favorite is a heritable trait.