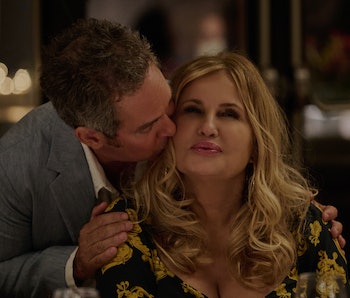 The White Lotus has taken its time revealing the mysteries and conspiracies lurking beneath the surface. However, with only one episode to go before Season 2 cuts to black, fans think they’re finally starting to get an idea of what the endgame looks like. That’s largely due to several revelations hidden within The White Lotus Season 2 Episode 6.

The episode, titled “Abductions,” provides a lot more clarity on the unexpected friendship that’s blossomed between Tanya McQuoid-Hunt (Jennifer Coolidge) and Quentin (Tom Hollander). The latter has quickly pulled Tanya into his circle of friends, but some fans believe the final moments of “Abductions” reveal the nefarious reason why Quentin has inserted himself into Tanya’s life in the first place.

And if one particular fan theory proves correct, then Quentin’s secret plan for Tanya may connect back to some of the most confusing scenes from the first two episodes of The White Lotus Season 2.

Quentin’s Unrequited Love — In the closing moments of “Abductions,” a drunken Jack (Leo Woodall) reveals to Tanya’s personal assistant Portia (Haley Lu Richardson) that his “uncle,” Quentin, isn’t nearly as wealthy as he pretends. Jack further says that Quentin came dangerously close to having to sell his family’s Italian villa, but notes that those concerns have vanished now that Quentin is on the verge of coming into money again.

At the same time that Jack makes his drunken confession, “Abductions” follows Jennifer Coolidge’s Tanya as she’s led into a private room by her handsome, Quentin-appointed date. As Tanya looks around, she stumbles upon a photograph of two men who look like younger versions of Quentin and Tanya’s husband, Greg (Jon Gries), wearing cowboy hats. The image calls to mind the story Quentin told in Episode 5 about how he once fell in love with a straight American cowboy in Wyoming.

Moments later, Tanya is distracted by the reappearance of her date, who finishes his seduction of her while what looks like the red light of a security camera hovers in the far corner. These moments have led White Lotus fans to believe that Quentin may secretly be working with Greg to record Tanya cheating on him in the hopes that doing so will nullify her prenup with Greg. That would open the door for Greg to not only leave Tanya but take some of her fortune with him.

That’s a lot to resolve with just one more episode, but it may go even deeper. This theory would explain a lot about the nature of Tanya’s storyline in White Lotus Season 2, which has remained largely unclear.

Greg & Tanya’s Prenup — At the end of Episode 5, Quentin tells Tanya that he would have done “anything” for the American cowboy he loved, then adds, “The amazing thing is, after 30 odd years, I still would.” If Greg is the cowboy, it doesn’t seem far-fetched to assume that Quentin may be involved in whatever Tanya-related scheme he’s concocted.

Whether the scheme involves bypassing his prenup with Tanya is unclear. However, it’s worth noting that Greg specifically says in Episode 2 that he can’t quit his job because Tanya made him sign a prenup, which means he wouldn’t be entitled to any of her money should they ever get divorced. Later, Greg tells an unknown caller that “she” is clueless and that he’ll be heading home tomorrow. After Greg leaves Sicily, Quentin swoops in and starts befriending Tanya.

Notably, when Tanya first arrived in Sicily, Greg tried to make her send her assistant, Portia, away, which would have isolated her further once he left. It’s also heavily implied in “Abductions” that Jack was told to keep Portia away from Quentin’s party, which suggests Quentin wanted to make sure no one would get in the way of his Tanya-related plans for the evening.

If Quentin really did record Tanya sleeping with her date, then it’s not hard to imagine why he wouldn’t want Portia around to monitor her boss.

The Inverse Analysis — Fans will have to wait for the premiere of The White Lotus Season 2 finale to find out exactly how Tanya’s latest adventure ends. Until then, this theory certainly holds water and would explain some of Tanya, Greg, and Quentin’s most mysterious scenes throughout the season.

Greg and Quentin coming together to scam Tanya out of her money would also connect to some of the biggest themes of Season 2, including how greed and wealth can turn even the most romantic relationships into toxic, transactional affairs.

The Season 2 finale of The White Lotus airs Sunday, December 11 on HBO.