“Breathing in your scent. Smelling your musk.” 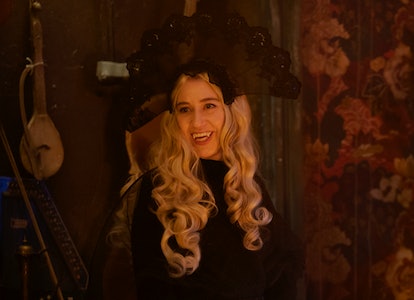 Inside a cavernous ceremonial chamber, a vampire with long white hair and elaborate black garb reads from a scroll while a shackled prisoner stands before her.

With a vaguely Transylvanian accent, she runs down a list of misdeeds that will soon earn the prisoners a one-way ticket to eternal rest. The presiding leaders interrupt her at every turn, until she finally loses her temper and scolds them for wasting time. Returning to the litany of crimes, she concludes with an apologetic, and perfectly timed, “Oh, that was actually it. Sorry. We’re done.”

This is The Guide, Kristen Schaal’s scene-stealing character from What We Do in the Shadows on FX. The Guide is a suffering servant of the Vampiric Council, an elite group that governs over all other vampires in their dominion. She must now contend with its worst leaders in her centuries-long tenure: Nadja (Natasia Demetriou) and Nandor (Kayvan Novak), who happen to be half of the show’s main cast. While these dimwits make The Guide’s life more difficult each day, Schaal’s role makes the already excellent What We Do in the Shadows that much more sublime.

SCENE STEALERS is a countdown that salutes the unforgettable small-screen characters of the year. The Guide is #24.

Kristen Schaal is probably best known for her voice work, notably as Louise Belcher on Bob’s Burgers, a young girl whose unrestrained id makes her both the least and most childlike character on the show. Schaal’s voice seems designed for creating indelible characters, with its unusual timbre and slight lisp. But what makes Schaal unforgettable is her ability to use that voice in subtle and unpredictable ways. She is just as funny deadpan as she is in her trademark 0-to-60 rage voice, achieving a spoken vibrato that is as compelling as it is hilarious. Armed with such an arsenal, The Guide transforms from a side character into Season 3’s secret weapon.

Who is The Guide?

What We Do in the Shadows excels at methodical worldbuilding, turning what seem to be throwaway moments into mind-blowing plot developments in later episodes. But the series wisely maintains The Guide’s mystique, refusing to explain much about her. She is prone to teleporting when (and where) you least expect her — a power Nadja is bewildered by — but you don’t even know her real name. She is, simply, “The Guide.” As Schaal said on After the Shadows, a talk show hosted by co-star Harvey Guillèn (who plays Nandor’s familiar, Guillermo), “There’s something about not having a name that actually makes the characters richer for me.”

One of the reasons The Guide is so captivating is the dissonance between her intimidating, otherworldly appearance and her disarming voice. That dissonance is something Shadows uses to great effect, similarly finding humor in its lead vampires who are powerful immortals who can’t wash their own clothes or use an escalator. The Guide is a font of knowledge and one of the few who can wrangle the charmingly oblivious screw-ups who are the main characters. Her voice undercuts the gothic menace that accompanies her appearance as a creature of the night. (This is not to forget Schaal’s incredible background reactions, which do almost as much to steal moments as her inflections.)

“Her voice undercuts the gothic menace that accompanies her appearance”

The Guide makes occasional references to her never-ending work, like putting a stop-order on one of Nadja’s decrees that Nandor has countermanded, and calling the Vampiric Council’s insurance company after Laszlo (Matt Berry) and Colin Robinson (Mark Proksch) destroy priceless artifacts. But we never get to see her go about her duties. If The Guide were to get her own show (What I Do in the Shadows, perhaps?), viewers could get a better feel for the byzantine bureaucracy at the heart of the Vampiric Council. At its staked heart, the show derives all of its energy from the juxtaposition of the mythic and the mundane, and a satirical look at an exhausted vampire office assistant cleaning up messes would be a worthy spin-off.

The world is still in turmoil. It has changed the way we work, but it hasn't changed how frustrating and out-of-touch employers can be. If anything, it has brought into the harsh light how little bosses know about the jobs their employees do for far too little pay. The Guide is intimately familiar with this dynamic. She expresses frustration with Nandor and Nadja’s decrees but carries on with sighs of, “Whatever, it’s above my pay grade.”

As the glue that holds the show’s many themes and plot threads together in Season 3, The Guide becomes an avatar for the everywoman and for fed-up workers all over who have to watch executives make terrible decisions and steal credit for their underlings’ hard work. Schaal’s fascinating performance makes The Guide unforgettable and relatable, turning one of the weirdest vampires in a cast of weird vampires into a hero for the human working class.

What We Do in the Shadows is streaming on FX on Hulu.