“It’s a prism of endless possibility.” 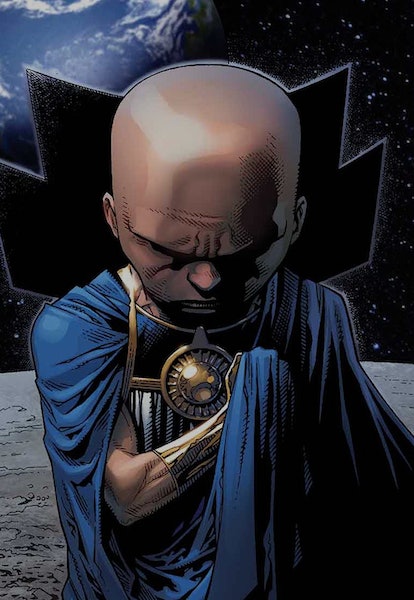 The first animated project to come out of the Marvel Cinematic Universe, What If…? explores the multiverse previously unleashed in Loki. With Uatu (aka, The Watcher) serving as our guide through these strange new realities over the next nine weeks, viewers will have the chance to see familiar events reimagined if different choices had been made.

What if Peggy Carter became the first Super-Soldier? What if T’Challa was Star-Lord? What if the Avengers had never assembled?

These questions are only a glimpse into what Marvel Studios plans to be a multi-season project, and as more MCU films and series are released, more questions of What If? will arise. The possibilities are endless.

I first discovered What If? early in my comics reading journey. If I recall correctly, it was What If? #12 "What If Rick Jones Had Become the Hulk?" that served as my entry point. As someone who has always been fascinated by alternate takes on familiar stories, I immediately gravitated to the series. Some issues, like the rather depressing What If? #42 "What If Susan Richards Had Died in Childbirth?" even served as my introduction to mainline stories and characters.

What If…? is an extension of my love of fairy tales and mythology. These are stories that consist of familiar elements but change based on who or what culture tells them, and the time period they’re told in.

This holds true for the first three episodes of What If…? that not only address certain plot and character concerns fans of the MCU have had over the past 13 years, but also socio-political issues of our time. (Like S.H.IE.L.D. forgetting that the soldiers they use as bodies in the field are also humans with families whose grief is tied up in red tape and logistics, an idea that comes through in Episode 3 of the animated series.)

While preparing myself for What If...?, I revisited several volumes of the original comics. In the process, I’ve rediscovered a few multiversal stories that haven’t been confirmed for the animated series (at least not yet) but could play a crucial role in the MCU.

Here are three What If stories that could dramatically alter and enhance the Marvel Cinematic Universe — assuming someone decides to adapt them in Season 2.

What happens — In this 1977 story, Steve Rogers and Bucky Barnes manage to disarm Baron Zemo’s drone plane and continue to fight in America’s subsequent wars and battle against Communism. Nick Fury is killed during the Korean War, and Steve Rogers is asked to become the head of the newly formed espionage agency, S.H.I.E.L.D. Bucky then takes up the mantle of Captain America, and Rick Jones becomes the new Bucky.

Why it matters — Obviously, an MCU adaptation couldn’t do a 1:1 retelling of this story, but there’s a lot of mileage in the idea of Steve and Bucky dealing with a rapidly changing world and wars that weren’t as clear-cut as WWII. Do Steve’s ideals become corrupted by the ‘60s and ‘70s? Do he and Bucky see eye-to-eye?

I think it’s worth arguing that part of Steve’s idealism and incorruptible nature comes from him being “a man out of time.” It would be interesting to see Steve become more cynical as the director of S.H.I.E.L.D., while Bucky, unburdened by the Winter Soldier, becomes the hero who clashes with Steve over the values of freedom and truth.

With this one story, the MCU could provide a drastically different take on Steve Rogers without undercutting the importance of Sam Wilson stepping into the role of Captain America.

What happens — Stephen Strange never learns the humility offered by the Ancient One. Instead, his hands are quickly healed by the black magic of Baron Mordo. Strange continues his career as a successful surgeon, but his arrogance eventually leads to him being fired for malpractice.

Mordo then seeks Strange out and trains him as his disciple in the service of Dormammu, who takes a page from the Sith and tells Strange he doesn’t need two disciples. So Strange murders Mordo.

The Ancient One gathers a group of mystics to confront Stephen. Beaten and broken, he finally learns the humility he avoided all those years before and becomes the Ancient One’s apprentice.

Why it matters — An MCU version of this could see Strange join forces with Kaecilius and the story could play out similarly to how it did in the comic. But instead of the happy ending, there’s a chance to go beyond that. Given how crucial Doctor Strange proved to be in defeating Thanos, I wonder what that battle would have looked like if Strange had not joined with the Avengers.

With Dormammu’s aid, it’s possible Strange might have killed Thanos before he could collect the Infinity Stones, with Strange taking the Gauntlet and Stones for himself. So rather than Avengers: Endgame being a showdown between the Avengers and Thanos, it would be the Avengers vs. Doctor Strange.

That seems like an unwinnable battle, even for Earth’s mightiest heroes.

What happens — Iron Man dies from the Extremis virus. With Captain America still in opposition to the superhero registration, the government takes matters into its own hands, unleashing modified Sentinels on the superhero population. Despite an attempted rebellion, most superhumans are killed. Ultimately, so is Captain America at the hands of Maria Hill and government spook Henry Peter Gyrich. Gyrich becomes the new President of the United States, enforcing metahuman control.

Why it matters — Marvel Comics’ Civil War went down in the comics very different than in the MCU. Still, those events proved to be such a defining moment in the MCU that I can’t help but consider the possibilities of what would’ve happened if things had gone differently.

With Tony Stark dying and Secretary Ross taking the place of Gyrich, it would be interesting to see which heroes would still side with Cap and who would attempt to honor Tony’s legacy. If Cap dies in the confrontation and Thanos still has his sights set on Earth, how would the events of Avengers: Infinity War and Endgame play out? Maybe Captain Marvel or Thor would be able to step up, but without Tony’s brilliance and Cap’s leadership, those dusted by Thanos in the Blip would likely remain dusted forever.

These are only a few possible stories that could make their way into What If…? And given that the vast majority of the issues are X-Men and Fantastic Four-centric, the series won’t reach its full potential until the MCU adds those classic superhero teams.

If there are any What If? stories you’d like to see adapted for the series hit us up at thegutter@inverse.com!