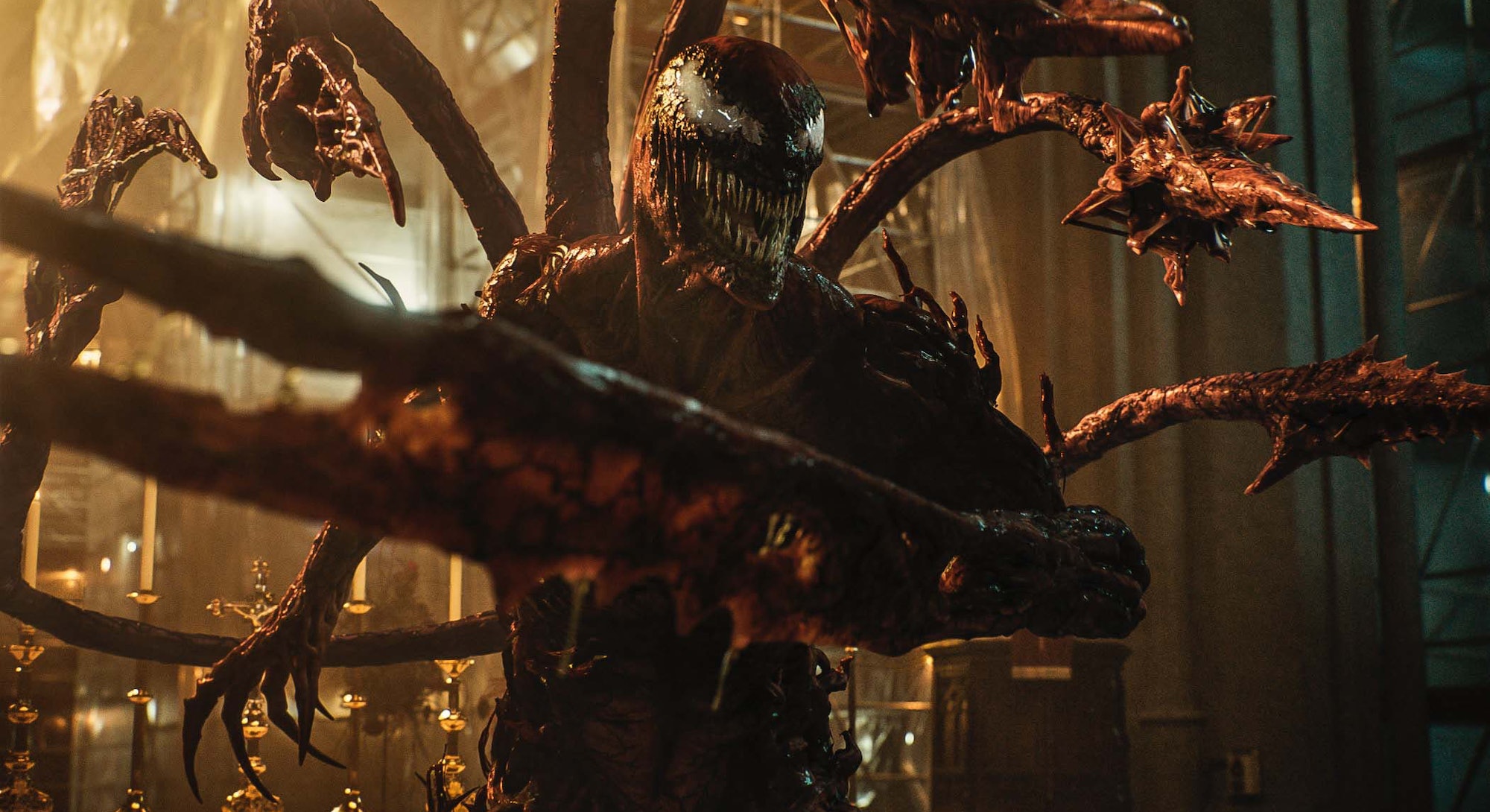 Venom: Let There Be Carnage, a sequel to the unexpected hit Venom from 2018, continues the adventures of Tom Hardy’s Eddie Brock and his alien parasite companion. But tonally, Let There Be Carnage body slams the reset button. First, the movie is a riotous bro-mantic comedy driven by manic energy and explicit queer subtext.

“I am out of the Eddie closet,” boasts Venom on a night out in San Francisco with rainbow glow sticks adorned on his neck.

Along with its subtext, the inclusion of Woody Harrelson as the villain and acclaimed VFX actor Andy Serkis in the director’s chair, the Venom sequel defies the self-serious superheroics that informed the first movie. Let There Be Carnage results in unbridled cinematic chaos that surpasses its limitations to deliver on its very title. Whether that’s a promise or a threat is up to you.

It’s been a few years since Venom, and little has changed for brawny journalist Eddie Brock (Hardy). While an exclusive interview with serial killer Cletus Kasady (Harrelson) has restored Eddie’s professional reputation, he’s still single and living in a sloppy pigsty with Venom, whose cravings for bad guys’ brains is becoming insatiable — and intolerable.

But when Cletus comes in contact with Eddie’s symbiote blood, Cletus manifests his own symbiote companion, the red offspring Carnage. After breaking out his imprisoned lover Frances Barrison (Naomie Harris, Skyfall), who has the destructive power of sonic screams, Eddie and Venom work to get over their quarrels to prevent, well, it’s in the title: carnage.

“Let There Be Carnage is refreshing counter-programming to the mostly ascetic superhero genre.”

If the 2018 Venom was a gritty action-horror with flashes of absurd comedy, Let There Be Carnage is its opposite. And it’s spiritually what these movies ought to be. With a metaphorically gay Eddie and Venom as the emotional center, Let There Be Carnage is refreshing counter-programming to the mostly ascetic superhero genre and a substitute meal for the dearth of studio romantic comedies in this age.

No, Carnage is not a steamy movie, and a returning Michelle Williams as Eddie’s ex Anne has a presence primarily reduced to affirm Eddie’s human heterosexuality. But Eddie and Venom are without question the Marvel Universe’s Odd Couple, or Bert and Ernie. We’re all the better with Venom making a messy breakfast.

On paper, Let There Be Carnage sounds ripe for disaster. But through the symbiosis of writer Kelly Marcel’s chaotic neutral script, the handsomely brutish Tom Hardy’s performance, and Andy Serkis’ confident directing, Let There Be Carnage embraces its inherent meme-ready absurdity to deliver something welcomingly unique than derivative.

What’s most impressive about Carnage is when and how it does take things seriously. In Carnage’s introduction, he is a bone-chilling menace whose high-fidelity appearance is an achievement on par with Serkis’ own on Lord of the Rings. The final confrontation between Carnage and Venom is also high-octane, demonstrating fine action and VFX craftsmanship.

Serkis’ years playing Gollum, King Kong, and Planet of the Apes’ Caesar proves fruitful for a VFX-heavy film like Let There Be Carnage. The movie overcomes its natural limits and implements intelligible composition and raw physicality that renders the action easy to follow. At the least, Venom and Carnage look like two distinguishable entities. Given that we’re dealing with powers that amount to little more than “Oops! All goo!” it’s shocking how clean everything looks.

If there are weak spots in Carnage, they are, sadly, Harrelson and Harris. Although they are more fun than Riz Ahmed’s sleepwalking villain from 2018, Harrelson under-delivers in a role that’s one application of clown makeup away from reminding you of better characters. Cletus is philosophically confusing and inert; even addressing his contradictions in the dialogue does little to remedy his shortcomings.

“Venom: Let There Be Carnage understands its assignment.”

Harris’ Frances, also “Shriek,” is even more troublesome as a motivator for Cletus. She is interchangeable with an inanimate object. Both villains of Carnage are tragic figures, but the movie spends next to no time encouraging empathy or fostering depth. When Venom declares, “Fuck this guy!” it’s less triumphant than it is stating the obvious.

To quote a prominent meme: Venom: Let There Be Carnage understands its assignment. (Think Taika Waititi reinventing Thor in Ragnarok and you’ll get the idea.) Though it is clunky and stupid — a new part of broadcast reporting is dishing out background exposition, it seems — it’s charmingly so, as it cements its lead two characters as modern cinema’s oddball couple.

To demand more than what the movie delivers is foolish. Venom is doing more than what is asked, in the case of its breakneck-yet-comprehensible action and anarchic humor. Could Venom be a smarter franchise of action-horror? Sure. But where’s the fun in that?

Venom: Let There Be Carnage opens in theaters on October 1.